Home»OTT»Netflix»A Madea Homecoming [2022] Netflix Review : A comedy of errors, without the comedy
Netflix/Reviews

For all the madness and buffoonery that ensures within the household of Tyler Perry’s A Madea Homecoming, the worst joke in quite some time pulls Black Panther into its wallop of race-bound humor. As Mrs. Brown makes her entrance at Madea’s doorstep and realizes that all her hosts are African-American, she crosses her arms and shrieks “Wakanda Forever”. I understand that there is no need to sit down and evaluate the foundation of a film like this, simply put – not to take it seriously. But even so, one has to hit a special kind of dead-end to finish this feature and not crave for the wasted 108 minutes of his/her life.

Mable ‘Madea’ Simmons remains the most popular recognizable character played by Tyler Perry. Brendan O’Carroll created the strong, no-nonsense, fact-spitting Black matriarch for a radio play which then found its way into a 1999 stage musical I Can Do Bad All by Myself by Perry himself. (Guess the title is too apt in this scenario). Madea turned more caricaturish, and unsurprisingly, found a lot of mass attention. Then her feature film debut followed in 2005’s Diary of A Mad Black Woman. Perry was not done with her yet. Then came 2019’s A Madea Family Funeral and finally the supposed finale of Madea with the play Madea’s Farewell Play. Still, Perry was not done with her, so Netflix now has A Homecoming, most unnecessarily so. This is also the first time Agnes and Madea are on-screen together for the first time. Again, most unnecessarily so.

Wait for it, A Madea Homecoming is boiled down to a ‘coming out’ story. So naturally, there will be loads of culture clashes and comedic moments. Yet, what should have unfolded as a comedy of errors turns out to be less of comedy (no comedy is a more apt word) and more of errors (disaster is a more apt word). Mrs. Brown (O’Carroll) is traveling her way back to the home to celebrate Madea’s (Tyler Perry, in a performance that screams heavens why?) great-grandson Davi’s college graduation. Tamela Mann (Cora), David Mann (Mr. Brown), Cassi Davis Patton (Aunt Bam) find their way back home as well. 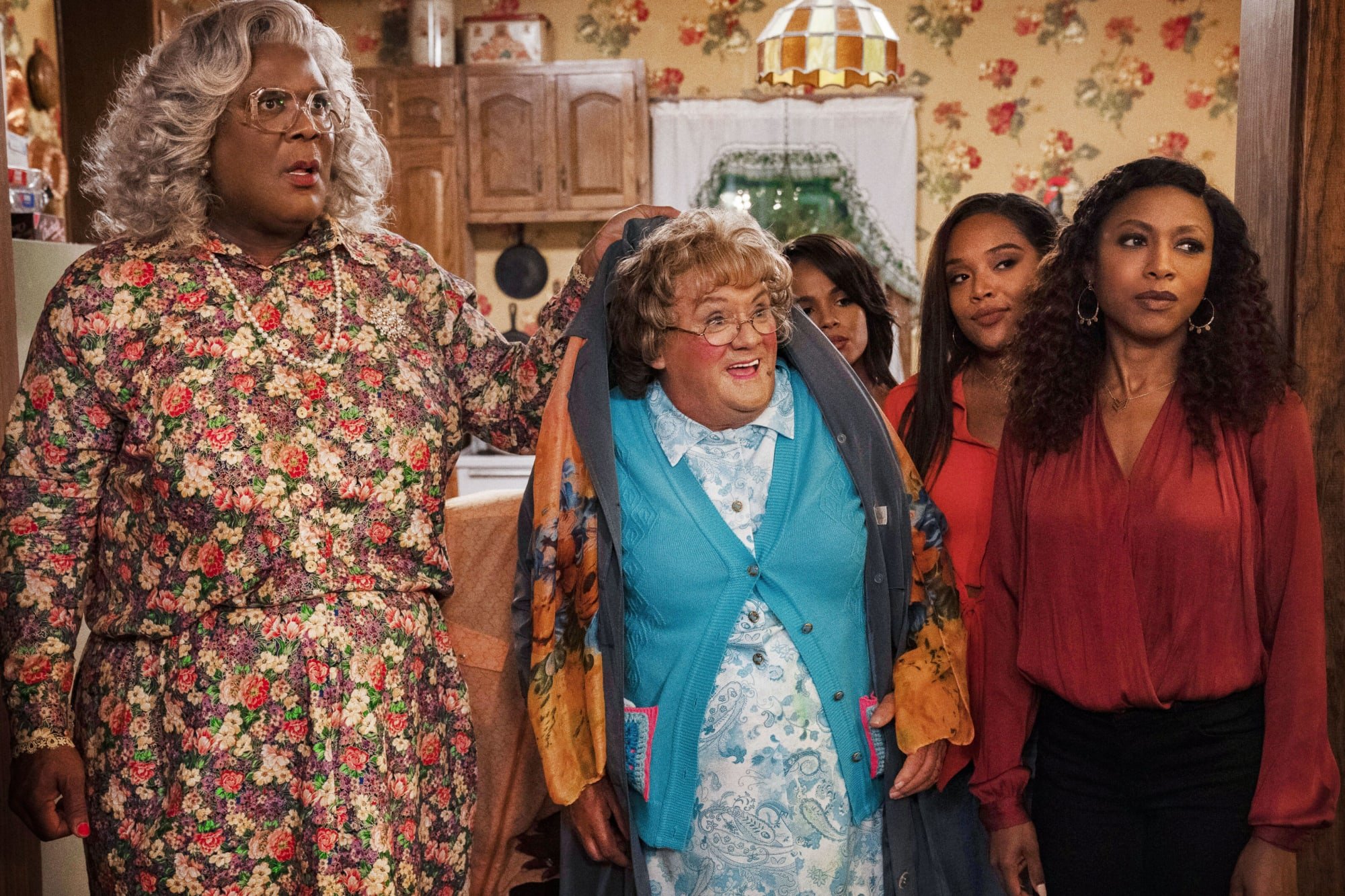 The sheer pointlessness of the dramedy that unravels is a case for a clueless filmmaker so deluded that he cannot see past the point of his own bloated understanding of a naturally bloated character. Even if Madea is not intending you to laugh ‘with’ her but laugh ‘at’ her, the point here is there is nothing left to laugh at. The comedy, caricatures, puns, and cultural references backfire almost all the time to make this feature truly a test of endurance for the audience.

If the Black Panther catch did not prove its point, wait till you are thrown one-liners like, “You just wait one cotton-picking minute,” and a truly uncomfortable joke on an impending proposal with – “This is no time for Black Lives Matter.” Yes, that is how nuanced the humor is. Reportedly Perry was concerned how the world had lost the ability to smile and laugh in the past two years- “I was looking at the state of the world and how polarized it is… nobody’s laughing. Nobody’s getting the chance to belly-laugh anymore.” If this is the tonic for laughter that Perry has come up with, we’d better stay diseased.

This brings me to the point that this is not the case of the sense of humor being lost to an Indian audience. Specimens of the nuances have been provided to prove that Perry does not even care to reach anywhere close to nuance. The Indian audience is also fed with men dressed up as women and doing comedy. Even the biggest stars in Bollywood have done it- some of them utterly embarrassing and unfunny, cue to Shah Rukh Khan and Ranbir Kapoor co-hosting the Filmfare Awards dressed as Chikni Chameli and Silk. Ask Comedy Nights with Kapil, now remodeled as The Kapil Sharma Show, and you’ll certainly know exactly what I am talking about. Cross-country or not,  A Madea Homecoming somehow falls in that category of humor: unfunny and annoying. There is no other way to put it. Perry must let Mable rest for her own good and spare us more agony. It is sincerely high time.

Tyler Perry’s A Madea Homecoming is now streaming on Netflix