Comparing one show with another feels like an easy way of criticizing one show’s points of view, but when you are creating a show about a financial crime, the chances of it getting unfavorably criticized becomes two-fold; especially if the other show was universally applauded one like Scam 92. Akkad Bakkad Rafu Chakkar has a huge flaw in its initial premise itself – Bhargav loses his honest bank employee parents after they get ostracized and boycotted by society due to a scam on the bank they had worked. It is never really made clear exactly what the scam was, except that “RBI had stopped operations of the bank”. Due to this, Bhargav’s parents are forced to lose their house, their life, as well as their “integrity”, as told with almost haunting seriousness by Vicky Arora playing Bhargav. Wallowing in grief, Bhargav is having a drunken night out with Siddhant, his best friend, and comes out with a plan to create a “fake bank”, start a scam themselves, and elope with the money to greener pastures.

Firstly, a great leap of logic there, and even as Siddhant’s character tries to dissuade it, the script won’t allow him to, because the script needs this to be the enlightening moment filled with comedy; the inciting hook which would jump-start a thriller. It would have been an infinitely more interesting take if it showed Bhargav acting out as a method to deal with trauma and loss. That isn’t the case. The show takes Bhargav’s idea as gospel and runs with it, and Bhargav explains it with platitudes like “Morals won’t take you anywhere substantial”, or “India has had 71,500 crores worth of  money stolen via scams” and of course the punchline of the show “The difference between Reality and Fantasy is a scam.”

It’s not uncommon for protagonists to do despicable or shady deeds to get to a much better life, buck the system. Protagonists like these are ample fodder for enjoyment for the audience. The best shows however also know that the characters are despicable and not someone you should actually be rooting for, and Akkad Bakkad Rafu Chakkar sadly misses the memo. The team of characters ultimately plan to open the “fake bank” in Bhargav’s ancestral small town, and to keep the bank open for three months, take money from the villagers and the sand mafia and money lenders and then after March, close the bank and walk away. If my description sounds simplistic and skeletal in its outlook, I can assure you the actual planning doesn’t have much meat to it as well. 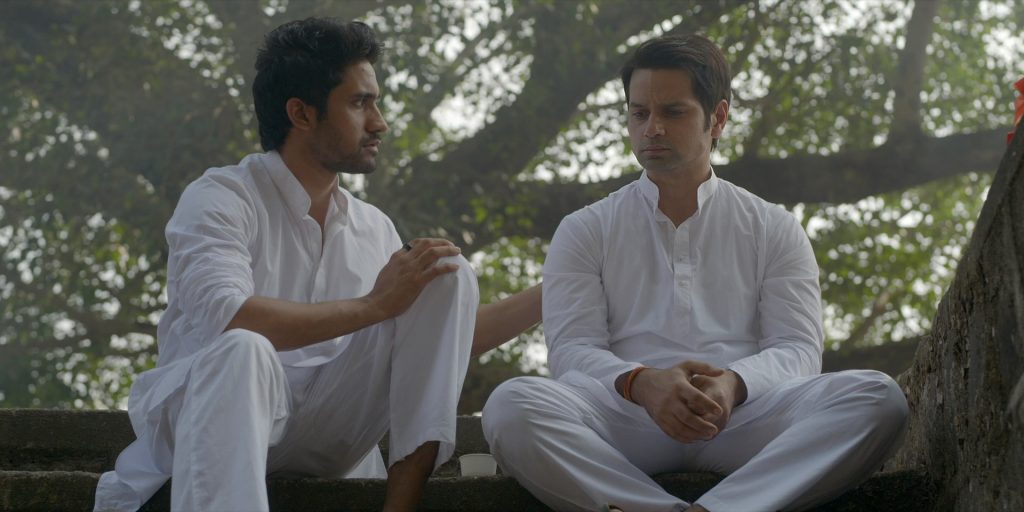 The big issue I have here is that the majority of the time we spend with this team at the bank, we see them working as a real bank and essentially scamming the villagers. While that is a sad and searing look at what actually happens in such scams, the problem is we are supposed to be rooting for the scammers? If the creators wanted to show a “Robin Hood” style approach to stealing from the system, this was the exact opposite way to show it.

There are bits and moments where the show shines. The cast on the one hand are mostly newcomers, and the acting too feels decent. Anuj Rampal as Siddhant is the standout among the newcomers in terms of comic timing and ease of acting. The other actors take a far longer time to ease into their roles and get rid of their stiltedness, and the post-production dubbing in the first two episodes didn’t help matters. The supporting cast of veteran actors like Shishir Sharma tries to bring some heft to a lazily written script riddled with cliches and underdeveloped writing. Shishir Sharma as the Professor of the team, hearkening back to the show’s primary inspiration Money Heist, is an individual mostly reduced to explaining the planning per episode, and to explain terms like cryptocurrency like you are reading a Wikipedia article.

It’s a shame because there are moments where Sharma’s experience as a veteran actor shines and he brings some depth to the emotional moments. Similarly, actor Manish Chaudhuri too brings a sort of secretive menace to this role, even as the script, as well as the direction, paints his character in one light, so when his profession is finally revealed in the last episode of this season, I was left scratching my head. Another moment where the show shines is in its depiction of a lesbian relationship in the heart of India, and how much farther can that go. That is the one aspect where the show does manage to get it right. The show also manages in its own sloppy way to show how much Religion and the film industry even tangentially can help to publicize as well as lure unwitting customers to such financial crimes as victims. The background score, the presence of songs in the show as well as the editing at times don’t live up to the mark, which only brings down an already mediocre show developed from a flawed premise.

It’s in the final episode where the show suddenly delivers a somewhat interesting narrative twist and leaves it on a cliffhanger, which on the one hand makes you excited for a much improved Season 2, while also apprehensive because the creator of the show Raj Kaushal had tragically passed away 3 months ago, leading the fate of the show up in the air. The creators of web series need to realize that it is far more satisfying for the audience if the story becomes narratively complete before introducing a new thread for any upcoming season.

Akkad Bakkad Rafu Chakkar is a binge-able show, with each episode running an average of 25 minutes runtime, but in the end, you too will feel scammed in spending 5 hours in this story, and I strongly doubt that was the makers’ intentions.