The American Pie movies are probably every 1990s kid’s first dirty film. As a child with little to no internet access, this was your only resort to titillate yourself. And there is also the outside chance you didn’t even know you could feel this way. American Pie, released in 1999, was truly one of its kind. For a younger generation taking their first steps into adulthood, it was like all your fantasies came true. The movie-watching experience was wholistic and extended to you sneakily putting it on in your room and tiptoeing around the house to get ahead of your parents. Those were the days.

The franchise as a whole saw immense success commercially, raking up almost a billion dollars in box office collection. The success of each of the predecessors spurred the other ones on. Jason Biggs confirmed in his breakout role his superstardom and popularity among the teens. His mix of innocence and naughtiness had a truly winning quality. In the light of recent comments made by star Jennifer Coolidge (who played one of our lives’ first MILFs on screen), we bring to you our rankings of the American Pie films. So sink your teeth in the series and enjoy those wonderful memories! Happy reading! 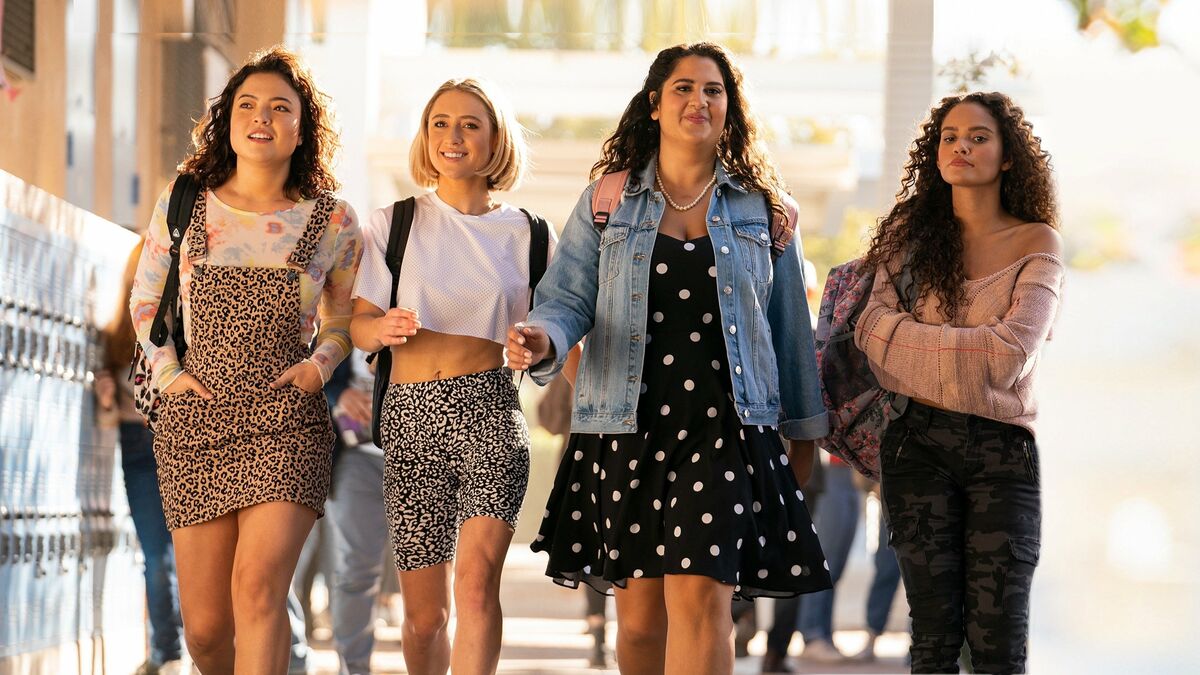 Girls’ Rules takes a different perspective on college and creates a first-time naivety experience for the viewer. Coming so late in 2020, the spin-off does not have too many surprises for you, though. While its attempts are honest and in tandem with the American Pie brand of comedy, better movies with the same things to say are tempting alternative options.

The overwhelming sexual undercurrents disturb any sort of buildup in the plot and story. It looks more like a botched job in the writer’s room. The ensemble cast is left to fend for itself in the absence of a solid foundation. And the result is a mixed bag. The rotten eggs certainly spoil the mood a bit, painting Girls’ Rules as sort of a mishap in the franchise. It also serves as the final film in the spin-off juggernaut that was less than impressive overall. 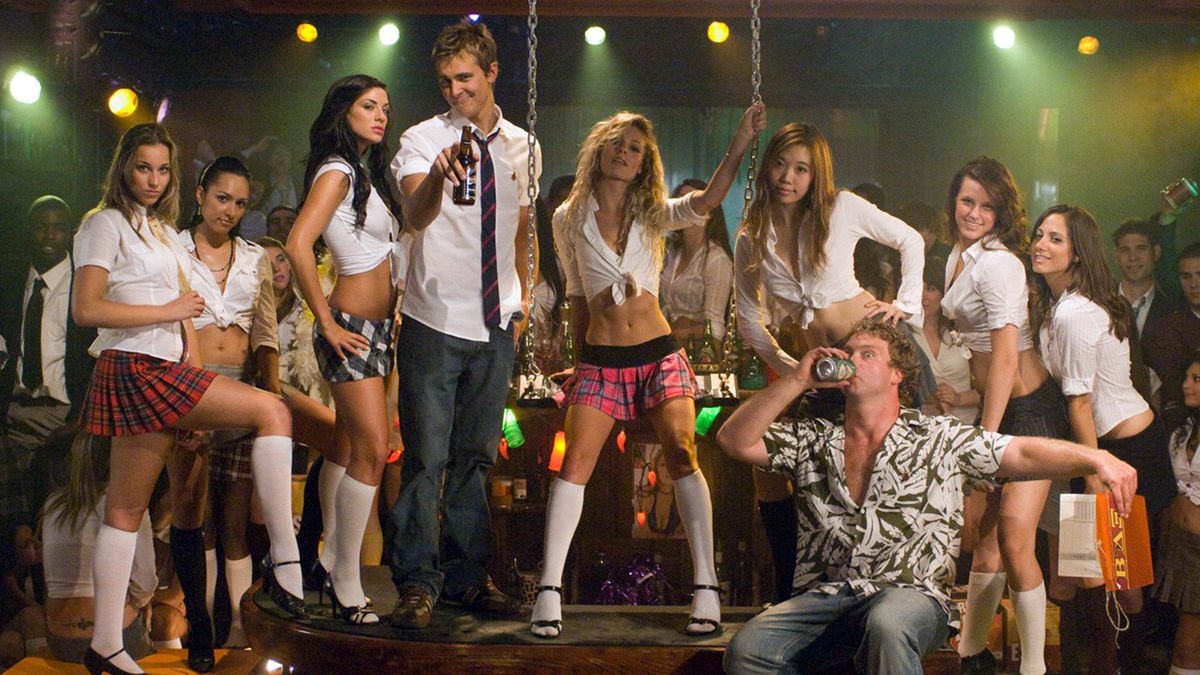 Beta House was another moderate commercial success that was prompted to be made by its predecessor’s success. Beta House, as the name suggests, dramatizes the inside stories of male fraternities in college. The frat-boy tales that almost every college-going student in America has, serves as the wild spice in this delicious American Pie dish.

Admittedly, the representations are a bit extravagant but that is what makes the journey really fun. There is simply no method to the chaos and nonsensical overtures of college parties and love affairs in any of those students’ lives. Beta is set up in the form of an adventure-filled rivalry between the two main factions of boys that feature in the story. It is really no holds barred as far as the competition goes, adding the gross element in aplomb.

John White plays Stifler in this film. It is a different form for the character but one thing that White does so well is channeling his unapologetically shameless spirit. Stifler in the truest sense is seen again in his testosterone-filled college bash and that is a redemptive move. Full marks to the creators for sensing an opportunity and taking it up with both hands to carve out a separate film for the frat-boy culture definitive of the American college experience. 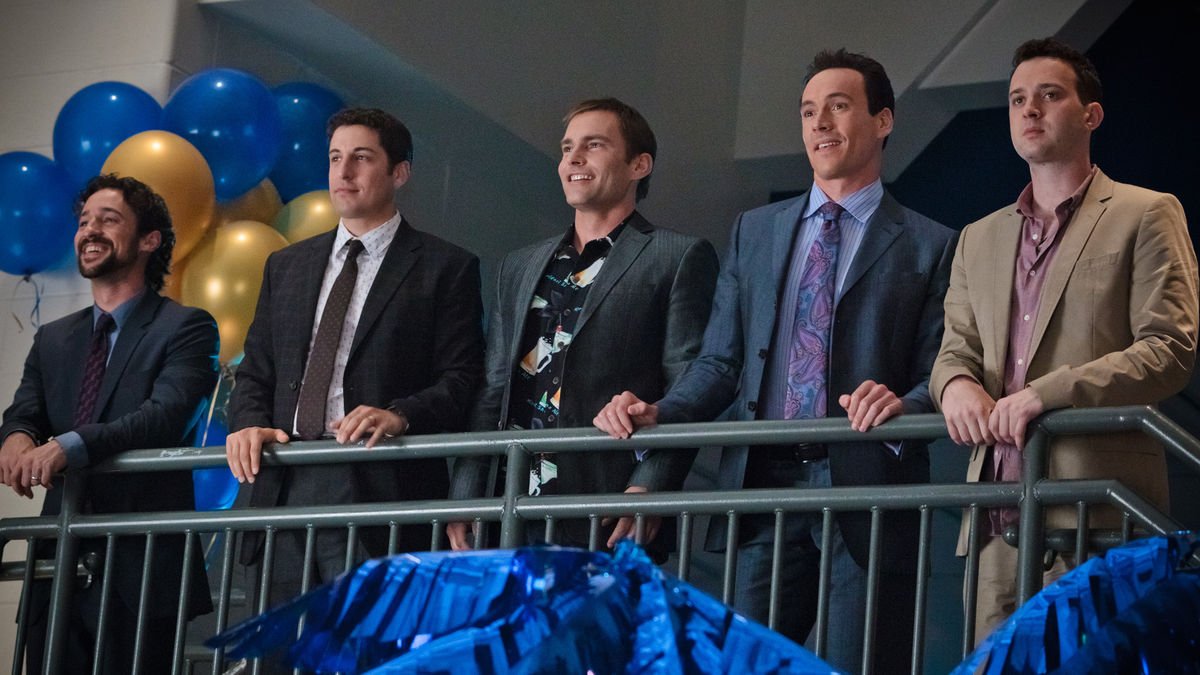 American Reunion was supposed to be the closure film that all great franchises must have. The one last hurrah that finally sets the viewers free. But as it turns out, the franchise had a couple of more offerings even after Reunion thereby dampening its appeal. But only in retrospect. There was a difference in Reunion’s worldview that differentiates it from other comparators in the franchise. It is all a “been there, done that” kind of vibe that the others did not have. Everything was mostly happening for the first time in those movies for the characters – and the viewers in a way – and that kept things interesting. Reunion comes across as just another face for the brand of American Pie without the requisite substance.

This one is strictly for the fans of the franchise, or generally, for those who have grown up with the American Pie movies. Beyond that deja vu, nothing else makes a lot of sense. One great thing about Reunion is that all the cast members – from Natasha Lyonne to Shanon Elizabeth – feature in it. Their very presence together is what made it seem like the final goodbye. The climax is again a bit emotional but the film overall is nothing like the American Pie that got us tingling. 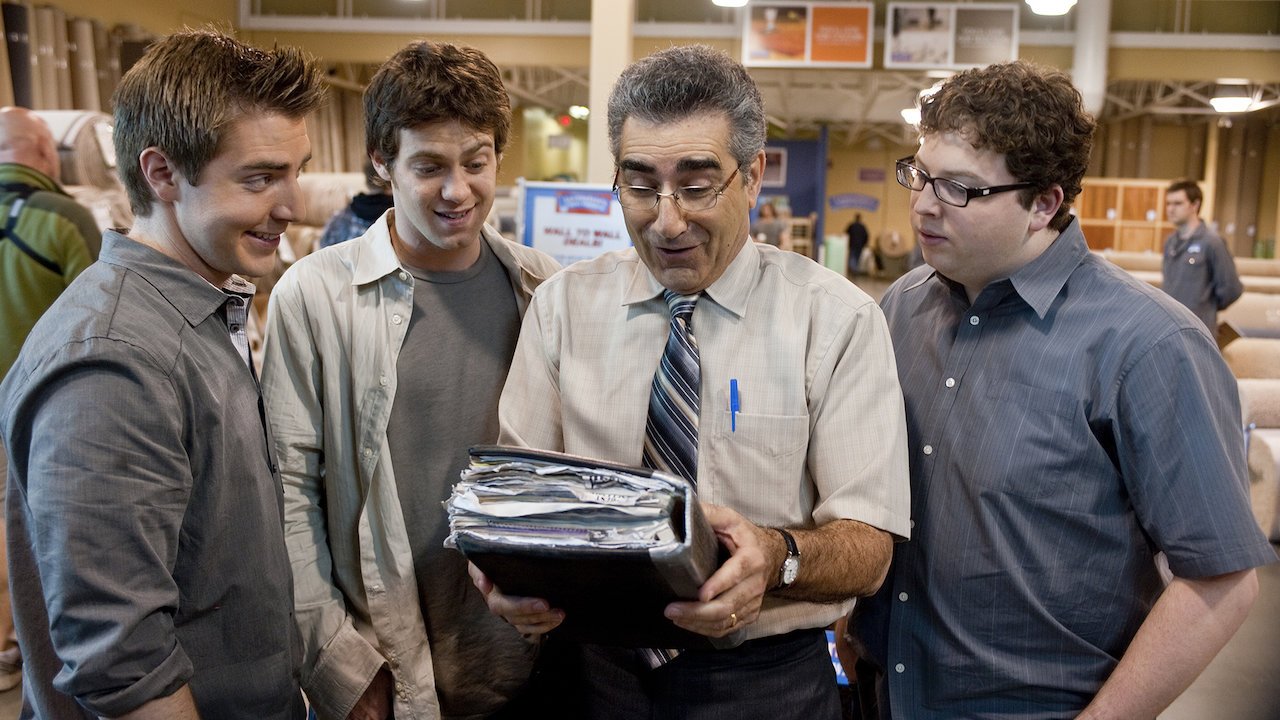 With similar sensibilities, The Book of Love recreates another teenage boy’s fantasy of breaking the shackles and turning the tide in his life. The spin-off is truly differentiated from the other American Pie films in characters, story, and slightly subdued execution.

This time, it is The Bible that dictates all the actions that our protagonist Rob Shearson undertakes to discover the darker sides of his biological gift (pun intended). There is almost the suggestion that all of life’s truths are buried in it. Rob’s group of friends takes a dive of “faith” to follow the gospel in their bid to get laid. The Book of Love conjures up all sorts of teenage fantasies – cheerleader fetish, the adult underwear smell, and the rarer animal-human connection.

One big critique of the film that sets it lower in this ranked list of American Pie movies is the lack of earnestness in the script. While the original and a handful of sequels felt heartfelt in how the story unfolded, The Book of Love and other spin-offs are slightly off the mark in that regard. There isn’t a lot of change in elements of narration but the manner in which they’re bound together is the influential factor here. 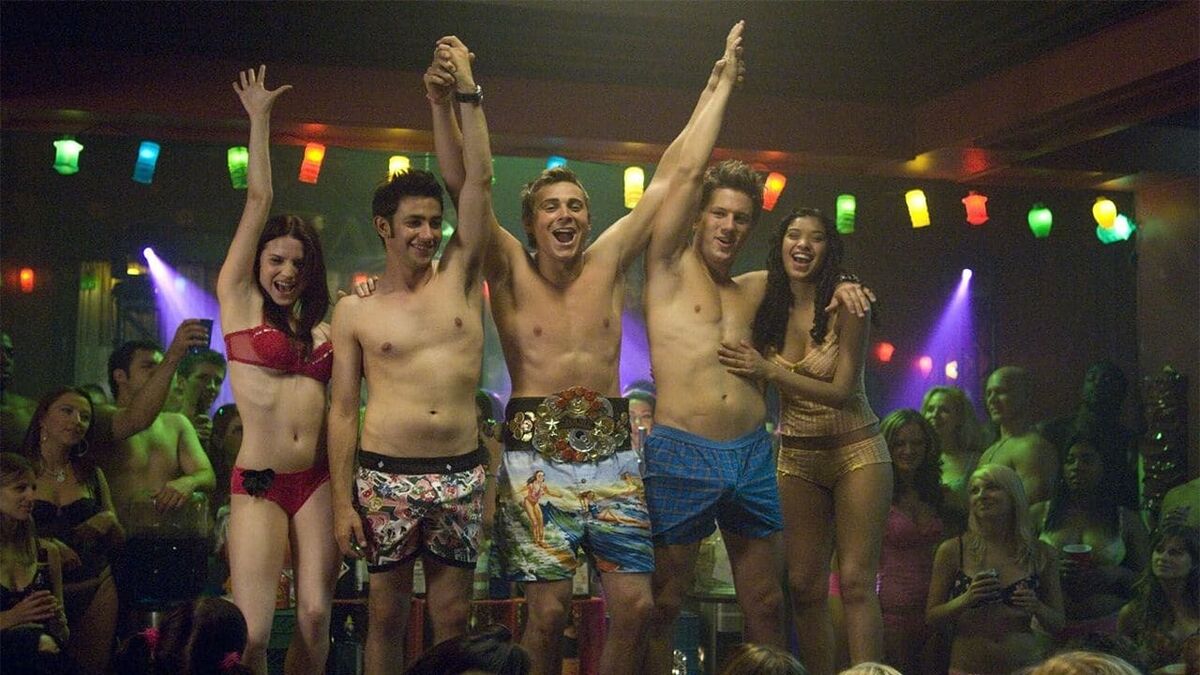 The American Pie Presents series really had a great response to the demand raised by audiences for separate movies for all the main characters. Stiffler was a fan favorite and people got their wishes true with his spin-off film. There was a suggestion that his back story would be something wild. It was almost instinctive that there was something traumatic that happened to him when he was young. And that comes true just a few minutes into The Naked Mile. Getting your whizz all over your grandmother who walks into your room without notice and then dies of a heart attack can be called just that. His journey from virginity to the other side is beset with familiar and warm genre traps that you will happily lap up.

No attempts are made to create anything with profound meaning. And that is actually a fair decision given the scheme of things in the film. We see a lot of old and new faces joining the cast. Eugene Levy is the most noticeable face and concludes another successful comic role. Among the newer ones, Jessy Schram stands out as the star performer. The Naked Mile is an enjoyable extension of American Pie college humor that is gross, unabashedly shameless, and limitlessly fascinating. 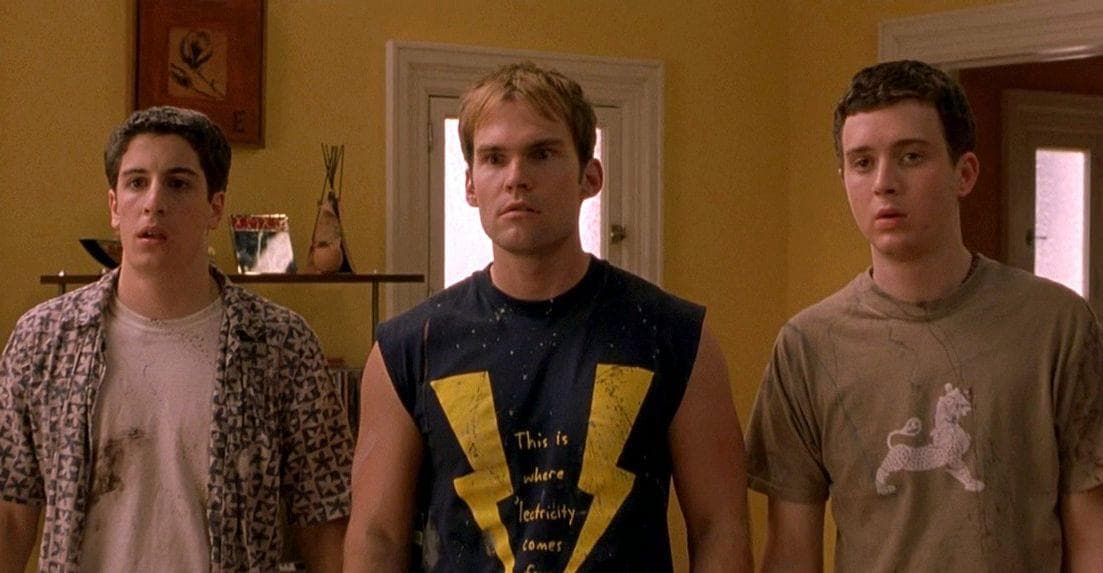 Any sequel to a film always has the pressure of emulating the predecessor’s success. It comes with the territory. Prepared or not, the sequel must ride the wave. For American Pie 2, it seemed like the pressure didn’t exist. The hangover of part one was not the only thing that we saw again.

Literally, almost all other elements of the story were the same! We had the same cast, with some notable inclusions; the same boorish youth vibes only this time, high school was replaced by college. A lot of coming together and old affairs were flared adding spice to the tingling of the present with the past. In terms of commercial success, American Pie 2 beat its predecessor by a big margin and truly established the franchise pedigree. 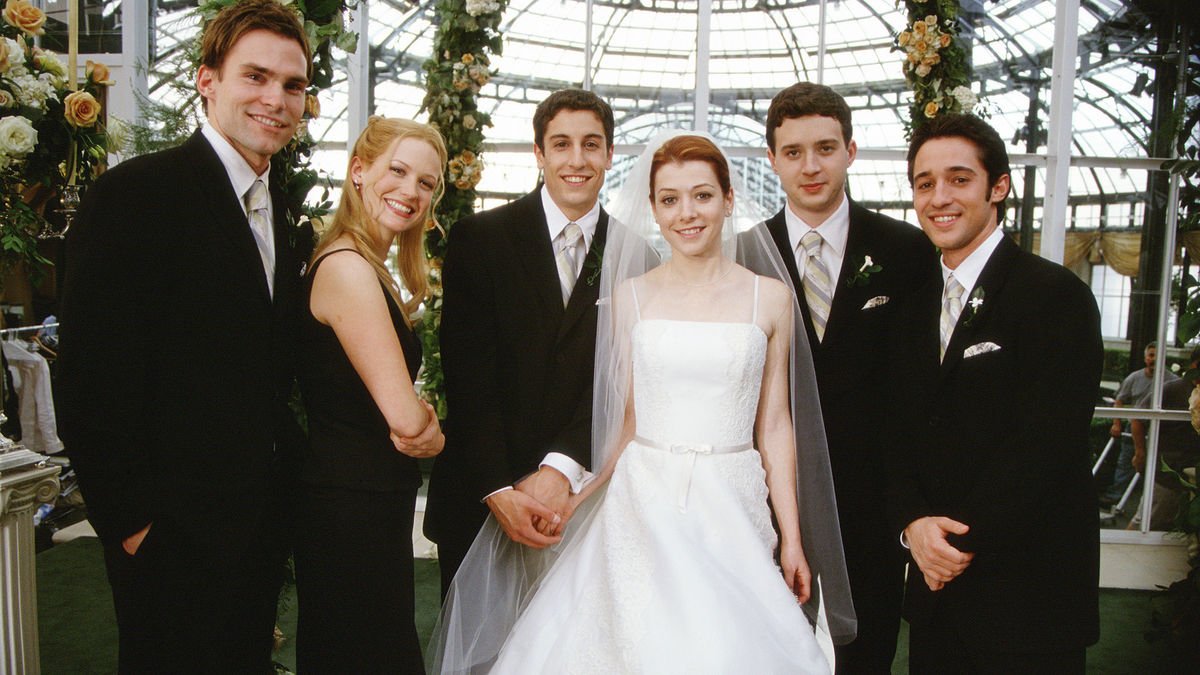 Eugene Levy’s comic timing and caricature of the modern-day dad acting all cool with newfound teenage sensibilities is an iconic piece of film history. Although Levy had many more successes before American Pie, his role in the franchise truly made him a household name.

In American Wedding, he is able to repeat the charm and catch Jim’s father at his rustic best. As the name suggests, American Wedding recontextualizes marriages in the American culture through the changing lens of domestic economics and gender parity. This part of the narrative remains unseen on the first viewing but when you rewatch the film, it comes out quite affectingly. Not only that, but American Wedding also has a lot of mature humor to look forward to with the odd dash of amateur hour.

Grossness has become a characteristic of the American Pie franchise and Wedding takes it a notch higher. The ultimate fun fest runs on a recreational drug’s level in the film, making it feel like one of the franchise’s own. Although it does not have the balance for those who aren’t fans of the series, Wedding is yet another treat for those who are. 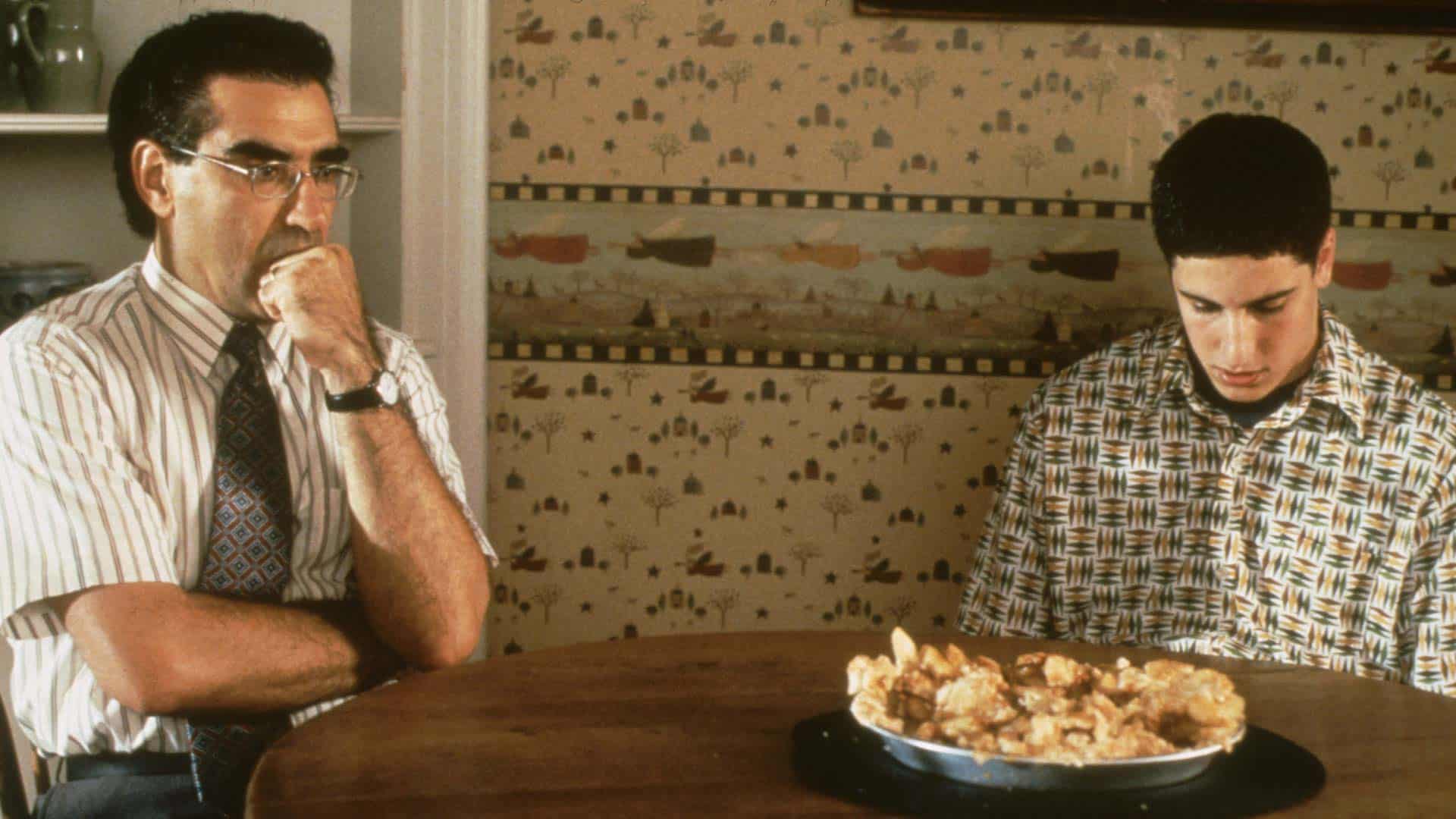 Was it going to be a surprise to find the 1999 original at the top? If not, then you are one deeply insightful cinema goer. I mean, come on. Can anything even remotely come close to American Pie, let alone the other movies in the franchise? It is the ultimate cinema experience that becomes a fantasy for a teenage kid.

American Pie is the introduction of a naive, first-timer into the world of adulthood and what they have hitherto known as the reproduction chapter in their biology books. The magic of American Pie lies in the sense of anticipation of what is to come and the excitement of how it will all unfold.

In its truest essence, American Pie was liberating. To see boys and girls of your age explore their sexuality and fantasies was empowering. It could be you in place of those characters on the screen.  American Pie is the lovable mush of judgment, sensuality, and affection that you cannot possibly hate. Although today, with wider access to all kinds of adult content and social media, the appeal of American Pie might have died down a bit, it remains a cult classic film and a fitting experience for Millenials who were looking to find themselves in real life.

Read More: All Predator Movies Ranked, From Worst To Best