Directed by Armağan Ballantyne and written by Jackie van Beek and Ballantyne, Nude Tuesday focuses on a New Zealand based married couple, Laura (Jackie van Beek) and Bruno (Damon Herriman). They have two lovely daughters, Alice (Beau Cassidy) and Pippi (Penelope Crosby). Laura works at a company that sells adult diapers and Bruno works at a showroom for bathroom appliances.

From the opening frame itself, it’s made apparent that Laura and Bruno don’t have an active sex life. And as the movie rolls on, we see that the two can’t have a conversation without bursting with anger. At first glance, the reason behind this seems to be their age, the burden of their work, and taking responsibility for their children. But their trip to a marriage/relationship counseling camp headed by Bjorg (Jemain Clement) reveals that the issues are deep-seated and toxic. 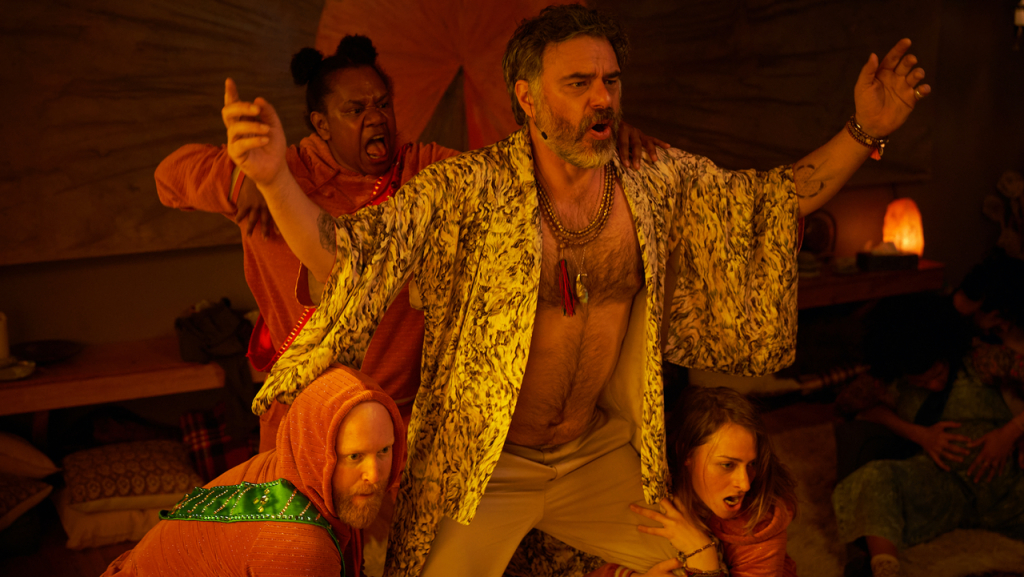 After or while watching Nude Tuesday, if you start looking for the language that the characters speak in, just stop. Because that’s not a real language. It’s literally gibberish, which has then been “translated by subtitle writers Julia Davis, Ronny Chieng and Celia Pacquola. You can consider it to be a funny joke, an attempt to make you read the subtitles or a hilarious metaphor for the lack of communication (both physical and verbal) between Laura and Bruno.

The latter actually makes the crux of the story. Ballantyne and van Beek do a commendable job of showing how important it is to amicably move on once you know that a relationship is over. Everyone knows when the cracks turn into a fracture. They just stay in denial and keep blaming each until they determine who made the first mistake. Blame games are endless and hence, pointless. And the worst part of it is that it not only hurts you but hurts your kids, who legitimately didn’t sign up for this traumatic situation.

Without spoiling too much, Bjorg and the whole sex camp represents the over-reliance on unprofessional (special emphasis on the word “unprofessional”) external help to solve internal problems. Of course, if it’s something severe and requires external help, please, rush to professional authorities and therapists and get it sorted. There is no doubt in that. But gurus and advisors and any other buzzword that helps frauds avoid the fact that they have no knowledge about what they’re doing should be shunned.

They are in it for the money, there’s a fat chance that their own life is in shambles, and they just want to exploit the fact that you don’t want to look inwards or search for professional help. So if you see a Bjorg, run the other way. Marriage isn’t the be-all and end-all of your journey. There’s more to it. And talking about that with the one you’re in a relationship with can illuminate the way forward.

Ballantyne maintains a balance of comedy and drama to tell the story of Nude Tuesday. There’s an air of chaos when Bruno and Laura are introduced which crescendos with the accidental hand injury scene. She makes you wince, cringe, laugh, think about why you laughed, and then envelope it all in a layer of wholesomeness. Andrew Commis’s cinematography, Cam Ballantyne’s music compositions, and Nick Meyers’s editing is sublime, with a hint of whimsicality.

The movie never devolves into utter crassness or sexualization or perversion. There’s a sense of objectivity to it all and the human bodies are displayed in a very authentic, non-judgemental way. The subjectivity is applied to the characters inhabiting those bodies; thereby making their eventual metamorphosis feel beautiful. The production design by Rick Kofoed, art direction by Mark Grenfell, and costume design by Kirsty Cameron brilliantly depicts the clash of the tones of Laura and Bruno’s world with that of Bjorg’s.

The same can and should be said about van Beek and Herriman. They don’t even look like they’re acting and have actually tolerated each other for years. The way they embrace their physique to further the messages of Nude Tuesday is worthy of applause. Clement, like his character, is on another level of hilarity. He walks this weird line of charming, attractive, unlikable and utterly pathetic all at the same time and it’s fascinating to watch.

In conclusion, Nude Tuesday is one of the best sex comedies of all time. Armağan Ballantyne and Jackie van Beek use the sexual aspect of its story to speak about the role it plays in a relationship, how it evolves with age, and the things you can do to love yourself before looking to find love from others. They use the comedic aspect to not just keep things fun and light, but also prepare you for some of the tougher, dramatic moments of realization between Laura and Bruno. The movie is a delight to watch because it is shot and edited so beautifully and the music only adds to the welcoming (with a hint of pretentiousness) nature of the narrative. The performances from the cast are amazing. Jemaine Clement’s character is certainly going to stick in your mind and hopefully keep you away from “experts” and “gurus” promising to help you by opening your “chakras” or something.

‘Nude Tuesday’ was screened at the 2022 Tribeca Film Festival

Lift [2022]: 'Tribeca' Review – Inspiring Journeys from the Homeless Shelter to the Ballet Stage