Watching the film adaptation of a popular novel after reading the book is always a tricky thing. We might be so protective of the image and emotions the novel conjured upon our mind that a film-maker’s clear-cut vision may come across as hideous desecration. Moreover, the mind would constantly play comparison games and naturally finds fault with the cinematic medium’s strictly defined limitations. Nevertheless, few great writer/directors without being wholly faithful to the book may try to riff on the novel’s core themes and create something distinct and profound which almost feels entirely his/her own. Alas, Alex Garland isn’t a great film-maker and his loose adaptation of Jeff VanderMeer’s first volume of ‘The Southern Reach Trilogy’ is a total disappointment.

Alex Garland is a decent novelist whose screenwriting attempts has previously given us good genre pieces (28 Days Later, Sunshine, and Dredd). His debut directorial effort Ex-Machina, although is flawed and fumbled its chance to be radical sci-fi masterpiece, was compelling enough. But with the sci-fi horror/mystery Annihilation (2018), he neither pulls off genre thrills nor packs it up with deep philosophical questions. It definitely possesses a portfolio of grimly fascinating surrealistic and hallucinatory images, but the writing is plagued with cliches, vagueness and confusion, which could certainly be mistaken for profundity. Of course, we got to cut some slack for Mr. Garland, who has courageously taken up the task of adapting an unfilmable novel. 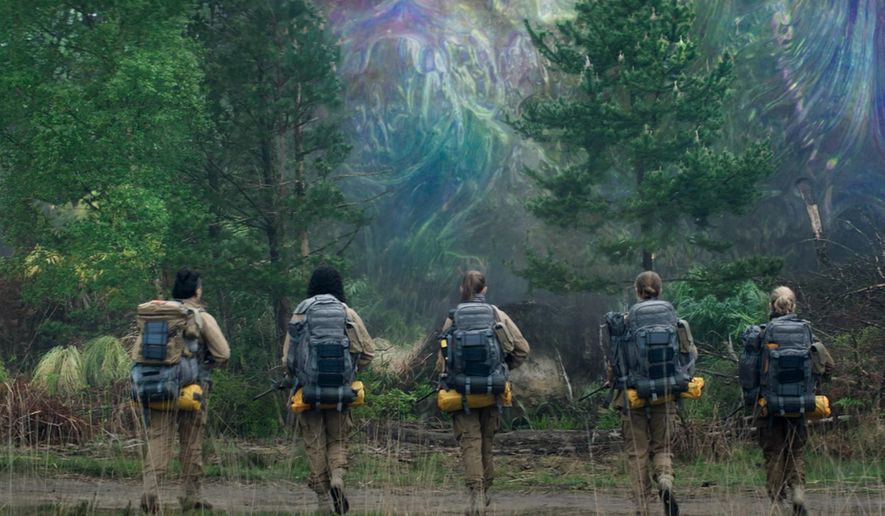 Similar to the Lovecraftian sense of ‘cosmic horror’, Jeff VanderMeer’s Southern Reach Trilogy revolves around a scientific phenomenon that is utterly inexplicable to human minds. Long passages of the novel are devoted to showcase how the words and thoughts drawn from the well of our limited consciousness aren’t adequate enough to delineate or dissect the mystery of Area X. Furthermore, the three volumes – Annihilation, Authority, and Acceptance – are wildly diverse in terms of narrative tone to be simply boxed under the category of ‘sci-fi’ genre. Jeff VanderMeer’s vision isn’t just decidedly creepy, but beneath it lays a deep commentary on the minuscule scale of human consciousness compared to the immense context of boundless universe. It’s also a gentle allegory on how we transform the environment, and to our bewilderment imagines the reverse: what if a rapidly mutating environment chooses to transform us? [And yes the books could be frustratingly cryptic at times, especially the final volume]

Beneath the dazzling images of Alex Garland’s movie, however, we only find intellectual clutter. It wants to be a big studio project as well as a cerebral hard sci-fi, and unfortunately fails in both roles. The movie opens with a biologist named Lena (Natalie Portman) being questioned by a hazmat-suited man. He wants to know her experience inside ‘Area X’, and what happened to her fellow scientists during the journey. Lena is dazed and answers even simple questions with an exasperated ‘I don’t know’. A minor flashback reveals the testing time Lena went through, as her soldier husband Kane (Oscar Isaac) goes missing during a unspecified mission, and was presumed dead. One day he reappears mysteriously with little memory of where he was and regards Lena with an impassive facade. Even this shell of Kane’s former self is soon afflicted by grievous illness. He is also abducted to a secret government facility, right from the ambulance. In that sealed-off premise, Lena learns from a nonchalant psychologist, Dr. Ventress (Jennifer Jason Leigh) about her now-comatose husband’s last mission.

Area X was a lush tropical forest, which is now weirdly transformed after an otherworldly force strikes its coastal line, in what looks like a meteorite crash. The area is entirely covered by a giant luminescent wall known as ‘The Shimmer’. It looks like a huge soap bubble, and what happens once after passing through the shimmer is akin to the myth of Bermuda triangle: navigation and communication signals are scrambled and survival is impossible. Kane is the only exception. What’s more threatening is that the bright wall is slowly but constantly expanding outward. Since the missions led by trained soldiers didn’t yield any interesting results, the eccentric and unsociable psychologist plans for an all-female, all-scientists expedition into the uncharted territory. Accompanying the psychologist are paramedic/recovering addict Anya (Gina Rodriguez), physicist/self-injuring ‘cutter’ Josie (Tessa Thompson), and anthropologist/grieving mother Cass (Tuva Novotny). Lena volunteers to join. Her biologist and army vet credentials easily convinces Dr. Ventress to accept the offer. Once inside the Area X, they lose sense of time and stumble upon creepily bizarre recalibration of plant and animal cells. The mash-ups of DNA create unusual mutant beasts, which menaces the visiting scientists in both physical and psychological manner. 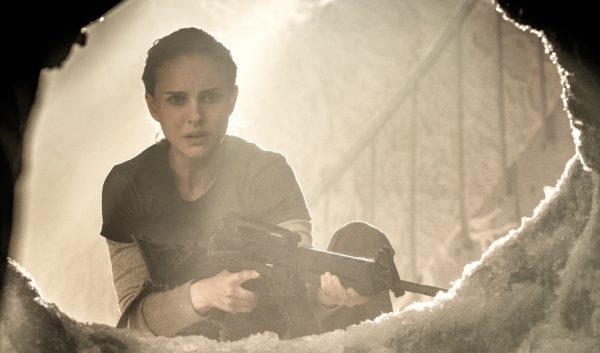 Unlike Denis Villeneuve’s Arrival (2016) or Jonathan Glazer’s under-appreciated Under the Skin (2013), Annihilation doesn’t translate its enchanting visuals to pose thoughtful and somber questions, or at least come up with a truly heartbreaking moments.  What’s most dissatisfying is Garland’s bland attempt to define the characters. VanderMeer’s novel is more about the mystery of Area X and how his set of ‘unnamed’ characters reacts to it (since the book’s narrative unfolds from the writings of the biologist’s journal, there was also a hint of ‘unreliable narrator’ dimension). Writer/director Garland tries a bit hard to infuse a sort of commentary into the all-female team, by making them all emotionally scarred and resolutely defined by neat backstories (the ‘strongness’ of the women are overtly insisted). Further adding to the cringe-worthy nature of characterization is the scenes defining Lena and Kane’s married life. The sun-lit frames, mellow music, and cheesy interactions between the couples are the sort that screams cliché. More laughable is the inclusion of Lena’s extramarital fling, filmed in dark color palettes; a ludicrous attempt to add ‘depth’ to the character and zero-in on the narrative’s recurrent theme of human self-destructive behavior. Ventress is deliberately enigmatic as the unnamed psychologist was in the novel, but her actions in the film are totally inconsequential to the proceedings.

The central part, where Garland conjures visuals that are alternately grotesque and gorgeous is by far the most intriguing stretch in the film. A lot of the novelists’ outlandish, terrifying ideas are missing, for example the horrific slug monster found deep inside the breathing walls of the underground ‘tower’. But considering the budgetary constraints and studio demands, it is understandable that Mr. Garland left out those things. However, the director’s mimicking alien encountered in the climax is a huge let-down. Anyway, what’s Annihilation is trying to say? That’s the last thing we could ask since the whole visual experience isn’t satisfying enough to appease our desire to interpret. There’s a kind of artful ambiguity one could find in sci-fi masterworks like 2001: A Space Odyssey, Stalker or the very recent Blade Runner 2049. Then there are works which doesn’t know what it wants to say and hopes that the viewers mistake its vagueness or emptiness as a signature of profundity. Considering the critical praise Annihilation has amassed, it’s been successful on that aspect. Eventually, Garland reduces the philosophical knottiness of Jeff VanderMeer’s writings into an annoyingly repeated phrase: ‘I don’t know’. It might very well be the answer to what the novelist-turned-film-maker was doing with this project. Annihilation (115 minutes) has the feel of a high-brow science-fiction and is embellished by few striking images, but the execution is shaky and incoherent. Maybe it’s trying to convey what most of the novel-to-movie adaptations say: read the book instead.

The Tonal Difference between Peter Rabbit [2018] and Christopher Robin [2018]