Home»Reviews»Films This Week»Vacation Friends [2021] Review: A Terribly Overstated Entertainer, But One With Little Potential to Waste
Films This Week/Hotstar News/Reviews

Vacation Friends [2021] Hotstar Review: Marcus and Emily are a pretty straight-laced couple. What can be more convenient than being rich, going to Mexico for a vacation and popping the question to your girl in a super-fancy hotel suite? However, the plans get messed up when the supervisor fucks things up. Here, they trip upon an overexcited Oregon couple, Ron and Kyla who are extremely rich but also super weird about everything around them. Eventually, the craziness only heightens as the two couples share the same suite, have to be air-lifted after a literal shipwreck and marry by the Mayan Shaman rituals.

SIMILAR TO VACATION FRIENDS [2021] REVIEW: ALWAYS BE MY MAYBE NETFLIX [2019] REVIEW: A COMEDIC TREAT WITH A RACIAL FLAIR

Not that the premise is anywhere original, as well. The eccentric duo versus hyper-modernized couple trope has been used several times before. I last saw it unfold in a Hindi film named Good Newz, a lousy pregnancy comedy that shifts gears between humour and melodrama in classical Bollywood fashion and messes up a solid cast. While this too becomes a little about the female experience in the second half, it majorly focuses on the pleasant but eerie banter between the two holidaying soulmates. However, this is where Vacation Friends earns an extra edge over most of the straight-to-streaming slapstick. It has little to no potential contained within itself. 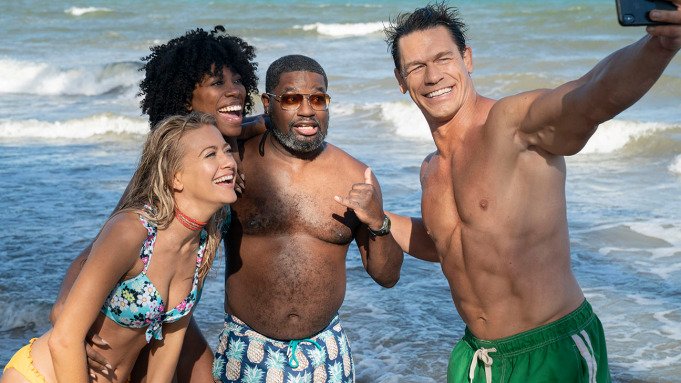 More on that later. First, one must state that Vacation Friends is guilty of having too many cooks to work on a singular dish. The five screenplay writers are all privileged white Americans. Thus, it comes off as no surprise that their idea of a black family and its dynamics is just as worn-out and cliched as any glossy sitcom with not a single major character of colour in sight. It smartly dodges contorted morality and any relevant issue for a pretty neat, glossy resolve. It’s a film that is full of sinister edges hidden just around the corner. Our unlikely protagonist Marcus has a failed marriage from before, and Ron smuggles drugs into Mexico. But none of these plot points is even briefly discussed.

However, the most indecent aspect of the film is its heavily outdated cultural clash. It never divulges even passingly the wide gap between the identities of these couples which separates them despite their shared financial stability. These characters, regardless of their behaviour, are elitist jerks with little sense of reality. However, the film celebrates their elitism very explicitly, since they are the ultimate Vacation Friends the audience supposedly needs to look up to.

I anyway don’t buy into a holiday movie as a concept. They are so commercial that even their genuine attempts feel too superficial to endure. Vacation Friends can’t avoid the cliche either, despite its strangest efforts to go a little offbeat. All it remains is a time-waster that somehow got elevated into easy leisure.

The acting is too generic, as well. Lil Rel Howrey is okay as the mediocre construction worker Marcus- he gets some hilarious lines but that’s about it. Yvonne Orji as Emily is more tolerable in her role as Emily but she gets little to do with the material. John Cena as beefed-up Ron is far more entertaining, taking in the worst plot turns with his easygoing charisma, none of which was used in The Suicide Squad. However, Meredith Hagner is easily the film’s finest performer, her Kyla rounding out to be as strong as funny.

Now, as I said earlier in this review, the film had little potential to speak of. And it’s true. The entire concept of a film like Vacation Friends exist is plagiarised from countless bad comedies in the history of cinema. So much so that the film’s ordinary directorial choices feel like a brilliantly delightful upgrade. To be on the safer side, it does some intelligent things with itself. I liked how smoothly the film transitioned from a vacation drama to a chaotic wedding comedy. The cinematography and art direction are surprisingly quirky. The night-time Mexican coasts, their caves and ritualistic Mayan art is captivatingly fashioned.

Everything else here is extremely hollow and unfunny. However, despite being such an overstated entertainer, Vacation Friends is an occasionally smart diversion. It doesn’t waste its potential, majorly because there was none.

He's All That (2021) Netflix Review: An Underwhelming and Under Baked Teen Rom-Com