The new Netflix series ‘Anxious People’ is based on a novel by the same name. Written by Fredrik Backman, the novel is quite popular amongst the readers’ circuit. With its adaptation, the creators of the series present an engaging screenplay that works convincingly on the emotional front. It presents all of its characters with an empathetic gaze, most of whom are a result of their circumstantial situations. Their anxieties bring out occasional humour but the script makes sure that it is not making fun of the sensitive aspects of the characters for the sake of comedy.

The creators have managed to find a fine balance between its comedy and drama to never let its content become insensitive towards their inhibitions. The central situation that we witness is about a person attempting to rob a bank and being unsuccessful in their attempt. Then the rest of the plot revolves around the aftermath of this situation ultimately leading towards the reveal of the culprit. The robber-turned-kidnapper appears largely masked and thus, identifying the culprit becomes almost like a game that the story depends its mystery upon. All the people come out of the flat where this drama takes place yet none of them seems to be wearing that mask. So the later narrative manages its tension in respect of discovering the culprit.

The two people who are in charge of the investigation are two police officers (a father and a son) that are inexperienced in handling an affair such as this one. The son appears more like a pretend cop than a real one – someone who has a very little understanding of how an actual investigation is handled and thus shows his immaturity from time to time. While trying to control the situation or even the aftermath, he largely seems like an amateur. Suspecting one individual a day, then someone entirely different another day, almost on a whim of his mind without a clear direction or understanding of how to reach a conclusion of this question, he brings out the element of humour due to his inability to handle the matter at hand with the required maturity. 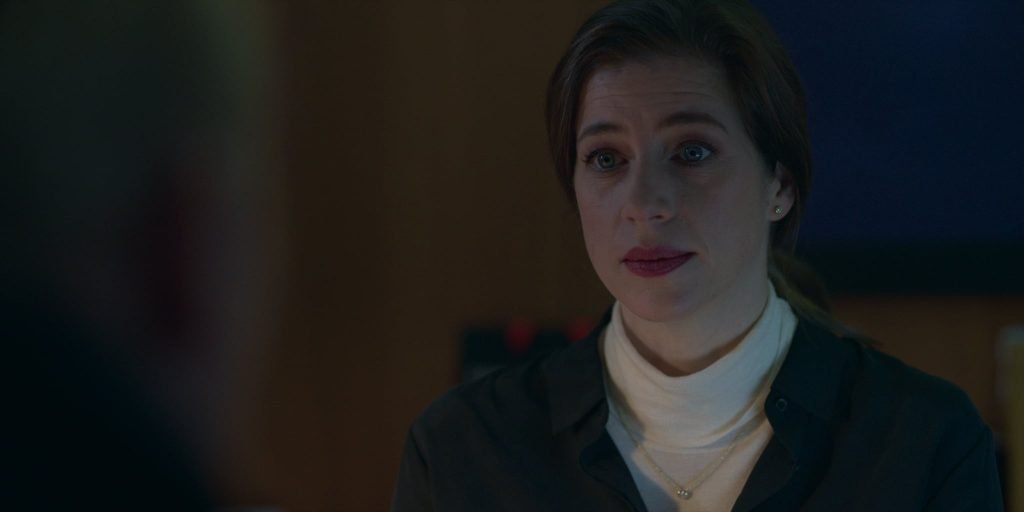 The comedy that we witness is largely derived from the fears and anxieties of its characters. Instead of turning those sensitivities into laughter (making a punchline out of them), the script uses them through organic situations. The awkwardness that comes across in our daily lives due to the inhibitions – the ones that are not always real but seem real due to the imaginary demons in our minds – in our own little worlds, the script of Anxious People uses them with simplicity and naturalism.

Even a situation like going to a flower shop and buying flowers over and over – just as an excuse to meet the lovely shopkeeper – not being brave enough to ask her out right away and thus working on this mental build-up towards taking the next step of simply asking the other person out on a date, gives the humour from such commonplace occurring a breezy, inoffensive quality. Through such relatable situations, the script tells the viewers more about the personalities of its characters without the need of spelling them out through its dialogues. And by switching back and forth between different timelines, the writing also creates an interesting fable with its interconnected narratives.

Also Read: 10 Films to Watch if you liked Army of Thieves on Netflix

While the episodes keep a healthy amount of humour intact, the aspects behind the decisions by each of its characters make up for a highly engaging psychological drama. The heavy elements like loss, grief, instability among others come to the forefront through the interactions of the captives related to their lives besides the abduction. A bank manager trying to reconcile with a pang of guilt from the past becomes increasingly anxious in her daily routine. On the other hand, a middle-aged woman tries to uplift the spirit of her husband with low self-esteem as a way to work upon her own guilt from the past. The way these characters try to find the common ground while looking at their individual fallibilities makes up for a subtle lesson of empathy.

In one way or the other, all the characters from Anxious People try to navigate their way out of their self-inflicted wounds through a situation that miraculously connects them on a human level. The way in which all of them find the drive to help one another solely for humanistic reasons gives each of its episodes a bittersweet edge. By spanning it into six episodes of about 30-minutes each, it creates a moving dramedy without letting it get exhausting.