Hilda and the Mountain King Netflix Review: The year 2021 has finally come to its end, and boy, what a year it has been. While 2021 has given us some incredible films, the same can’t be said about the animation segment. When I talk about animation, the mystical world of magic and enigmatic power to woo someone off the ground is almost hypnotizing to me. As a 30-year-old woman, animation is an escape for me. An escape from the daunting life of being an adult. I still dig animation like a 5-year-old kid, looking at the screen trying to understand how these weird shapes are moving or talking or doing whatever sorcery they are into.

The world of animation is constantly working its way to bring new stories or mold the old ones in the most appealing ways possible. Aesthetic and landscapes are given more attention so that storytelling creates a world for you to live in. The year 2021 had animation films like Vivo, Luca, The Mitchell vs. the Machines, Raya and the Last Dragon, Encanto, among others, but Hilda and the Mountain King caught my attention without trying too hard.

Based on the popular graphic series by the same name, Hilda and the Mountain King is a Netflix Original film. The 84-minute long 2D animation adventure is directed by Andy Coyle, who has also curated 2 seasons of the Hilda TV series. This is a follow-up to season 2 of Hilda, which is an adaptation of Luke Pearson’s sixth graphic novel. 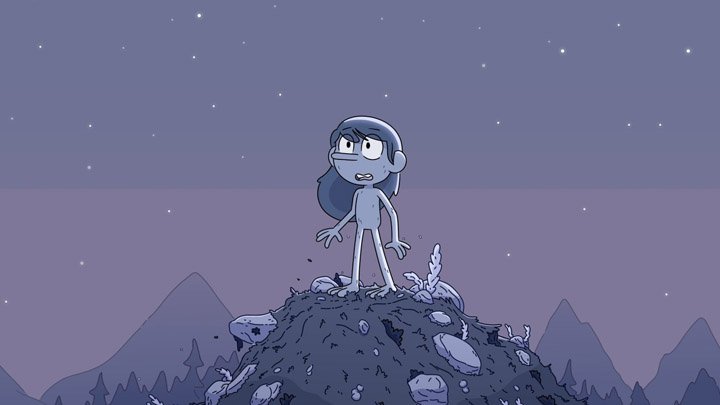 As far as the film is concerned, it directly picks up from the end of season 2 and opens with a blue-hair protagonist named Hilda, running from a giant troll. The young girl is trying to find a way back to her mother after being transformed into a troll. At the same time, Trollsberg is in fear of being attacked by the terrorizing trolls who want to invade the city. Erik Ahlberg is a safety police officer who is working on divisive strategies to save the people. He announces that the ringing of the massive bells will protect the Trollsberg residents if the trolls try to attack the city. Meanwhile, Hilda’s mother Johanna plans a mission to unite with her daughter and return Baba (a troll kid who seems to have been swapped with Hilda mystically) to his mother.

Hilda’s encounter with the mountain king makes her retaliate. However, the more Hilda tries to revolt, the better she understands about the community witnessing the constant challenges of being a troll in a place that is losing its heart to power, dominance, loss, and deceit. Will she be able to return to her home and be with her mother? Will there be a war between the humans and trolls? Will humans ever learn to accept that not everything is their own? These are some question that keeps the film afloat.

Somehow Hilda and the Mountain King reminded me of Princess Mononoke. Basically, both the films share the same wisdom. That is, we live in a world where peace and treaty are a given thing. If one tries to overpower the other, there will be an uprising and nothing will ever come out of it.

The film has a notable animation that draws you to the transient world of mountains, quietness, space, the night skies, and moonlight which is a dream in the real world. The film metaphorically shows the constant desire to be on someone’s greener side, presuming that it will be a much better world than our own.

Hilda is a brave little girl who is not afraid to be bogged down by fears and challenges. As a character, she is written exceptionally well. She is feisty and has a balanced approach to dealing with adversities. This is an intriguing way to introduce young children to have a courageous attitude.

As a standalone film (minus the books and TV series), Hilda and the Mountain King delivers a very clear and strong message. When it comes to the characters that form the film, they have a strong archetypal trait. Everyone including Hilda, her mother, Hilda’s best friend, and Amma the grandmother and mother of all trolls are characters that feel relatable. All of them have similar convictions, they are determined, and the strength and vulnerabilities they show upon getting separated and then being united make the feeling of watching them quite satisfying.

The film also equally talks about the omnipresence of our ancestors and how all of our lives are constantly impacted by their sacrifices. What I liked about the film is the sheer confidence and optimism it had about sharing a world where perhaps we will live peacefully with others by our side. The makers of Hilda and The Mountain King have drawn inspiration from Scandinavian folklore, where they acknowledge the mystical powers and dark magic by using it as a classic narrative device.

Related to Hilda and the Mountain King – John Denver Trending [2020]: ‘NYAFF’ Review – The Death of Humanity

The film doesn’t preach its philosophies and themes but contemporizes it by showing the intolerance, hatred, and manipulation of words that incite rage within people. It wants you to understand that living a simple and direct life can also be possible without having materialistic demands in life.

For me, Hilda and the Mountain King is a film for all age groups. Particularly because of its metaphorical aspect of showing that the world can live without war, only if they make an effort. Because there are trolls everywhere, it is just us who have to find a common ground and live in peace.

Hilda and the Mountain King is now streaming on Netflix