There is an A-side and there is a B-side to the current era of Pixar Films. That is just how the company has configured itself over the past decade. The A-side pictures tend to be franchise entries or films directed by company honcho Pete Docter. The B-side pictures tend to be original features by relative up-and-comers. These are smaller in scale and less spectacular in form; films that are beholden to the established Pixar template. If we are honest, however, even the A-siders have begun to disappoint of late, losing in narrative ambition what they have gained in their craft. The animation has never been more spectacular and the ideas have scarcely been as tame. One could tell, with the release of films as humdrum and unremarkable as Finding Dory, that this once venerated animation house had long since passed its prime. Here is where we are met with Luca, 2021’s only Pixar offering. While undoubtedly unremarkable, Luca (2021) capitalizes on the best parts of its B-sider predecessors. It is a light breeze of a film, and it makes the most of it.

The film is set around and about a quaint Italian beach town named Portorosso, and follows a young sea creature named Luca (Jacob Tremblay) who desperately wishes to leave the sea behind. He does not have much to occupy his time down there besides guppy farming and being lectured by his mother (Maya Rudolph, career cartoon-mom (see: The Mitchells vs. The Machines, The Willoughbys, Big Hero 6)). When he meets a fellow fish-boy named Alberto (Jack Dylan Grazer) and visits him on his tiny island, Luca finds he transforms into a human whenever he is dry, allowing him to blend into the human population. The two fish-boys become inseparable, and Luca eventually runs away from home to the aforementioned town. There the necessary hijinks ensue, including a budding friendship with local girl Giulia (Emma Berman) and a competition with a bully (Saverio Raimondo) in a triathlon race (an Italian variant involving swimming, cycling, and eating pasta). All of this builds to, well, not much in particular.

Director Enrico Casarosa seems to have had a very specific vision in mind for Luca (2021), and it is a vision suited well to the casual rhythms of lower-tier Pixar films like Onward and Brave. The references to Studio Ghibli pictures are certainly plentiful, from the name of the town (a tribute to early Miyazaki flick Porco Rosso) to Giulia’s Totoro-like cat and the Totoro-inspired credits which tell their own story. Luca shares some of the airy spirit of those Japanese classics, though very little of the mythic character or capacity for images. The plot is lite, and the characters are even lighter sketches. The eponymous fish-boy is a scaly Little Mermaid with some self-doubt sprinkled over, while his friends are earnest scallywags. I was taken most by Giulia’s father, a gruff one-armed hulk voiced economically by Marco Barricelli. The character’s strong-silent persona contrasted nicely with the motor-mouthed kids. The rest of the cast feels mostly like filler. 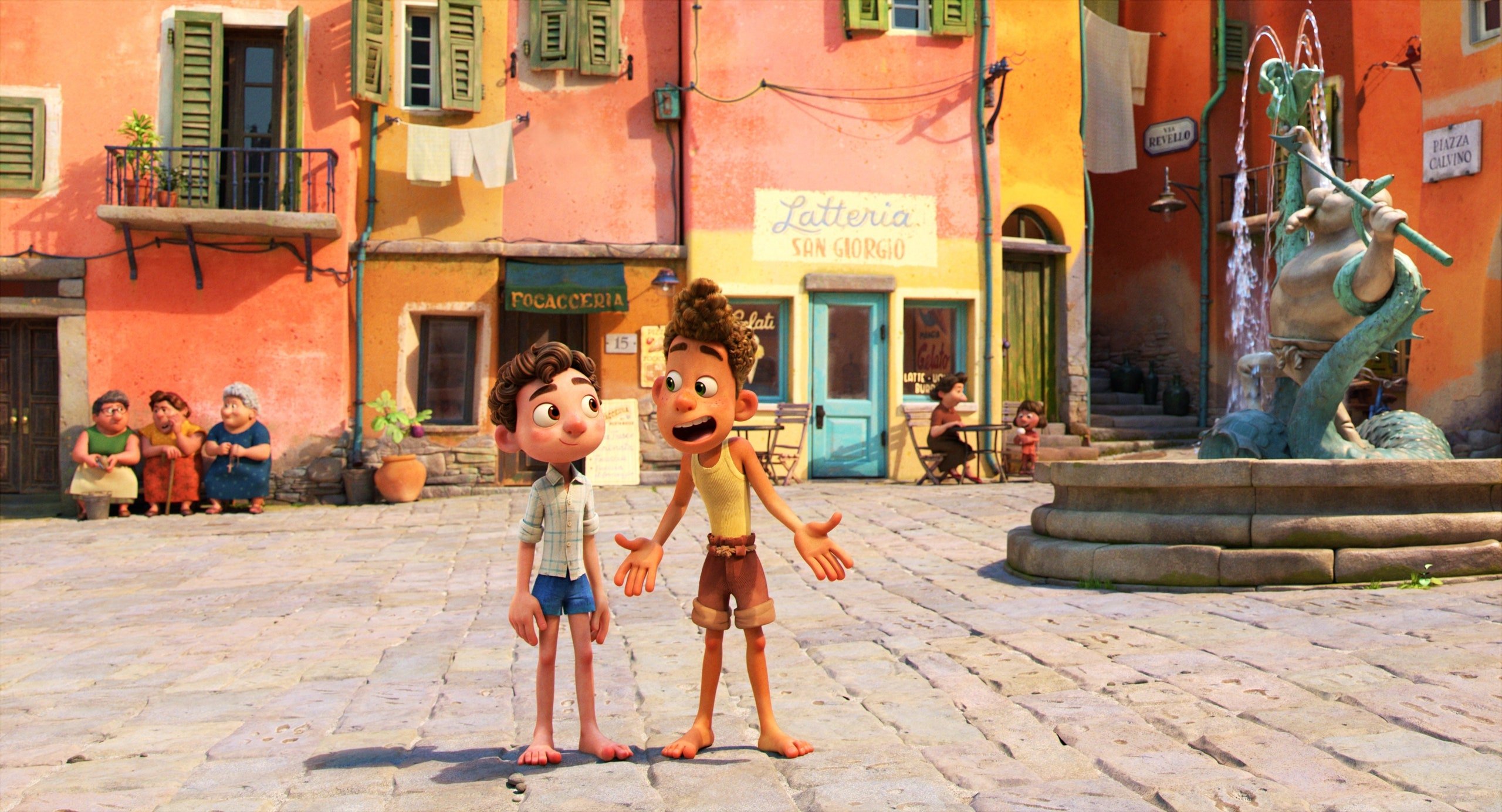 The main tension in the plot is derived from Luca and Alberto needing to keep undercover, from Luca’s parents as well as the townspeople who all seem to despise sea monsters. Wherever water touches their skin, the boys transform back into their monstrous alter-egos. This leads to some enjoyable slap-stick segments wherein the boys need to hide themselves until they become dry again. The concept may appear ripe for subtext at the outset, but Luca does not commit to anything besides a broad understanding that Luca and Alberto are just different from the other children. Any internal struggle to come to terms with their own differences are set aside to enable the laidback pulse that beats through the film. It is a summer movie with no agenda, and no subtle messaging.

All that said, Luca is the first of the lesser Pixar films to take advantage of the lighter stakes attached to it. The golden sands and sparkling seas of the setting mesh with the clay-tile town in a postcard perfect setting, and the overall feel of the film approximates a summer breeze. The focus here appears to be on stopping to smell the animated roses, and there are a few moments in Luca that capture that cinematic spirit. Those include a couple of fantasy sequences (one concerning a Vespa and another the moon) that conjure spectacular vistas for the characters to traipse through. The joy of Luca lies in allowing its splendid setting to envelop you in the same way it does the main characters. While the plot attempts some coming-of-age dramatism towards the end, most of the narrative heft is waylaid in favor of a brisk pace and a carefree sensibility.

Disney seems to be aware of the nature of Luca’s charms. Dropped without ceremony on the conglomerate’s streaming service, the movie is not much more than a charming frivolity, suggesting that Pixar is in need of its own renaissance period. The film they have just released is meant to be enjoyed in the same way you would enjoy an ice-pop. Appreciate the uncomplicated pleasures it offers you: the bright color, the easy accessibility, and the sheer flavor. Oh, and it is best enjoyed on a hot summer’s day. If the temperature is high enough, such a treat can transport you.