The Harry Potter movie franchise has been fundamental for generations of kids. Those who didn’t have siblings saw their brothers and sisters in the characters in the movies. Those who didn’t have friends seeked solace in the camaraderie of Harry, Ron, and Hermione. Those who didn’t have parents or grandparents were introduced to so many paternal and maternal figures throughout the series. In addition to that, we learned lessons about good and evil, fascism, politics, acceptance, and sacrifice in ways that our parents or teachers probably couldn’t. And then the author of this magical world, J. K. Rowling, revealed that she’s a T.E.R.F. (Trans Exclusionary Radical Feminist) i.e. blatantly transphobic, thereby souring the association with the franchise. Therefore, Harry Potter 20th Anniversary: Return to Hogwarts (2021) seems like an effort to rekindle the bond that has been severed by Rowling.

Now, the Harry Potter 20th Anniversary: Return to Hogwarts is replete with various elements from the franchise which you should experience on your own. But here are some of my key takeaways from it:

There’s a fair chance that fans who do not know about Rowling’s transphobic stance will find her limited screen time in Return to Hogwarts a bit weird. She appears more than a couple of times with a disclaimer on the top-right side of the screen saying that her bits were filmed in 2019. As if the special is trying to establish that Rowling was interviewed before she became openly bigoted. But those fans who love the franchise and are critical of Rowling’s transphobia will be relieved to see that she is kept at a distance, with the focus being on the movies and the filmmaking. Because these are distressing times. And if we can’t enjoy the nostalgia in an unadulterated fashion, then that’s exactly the purpose of being nostalgic at all?

So, in all honesty, directors Eran Creevy, Joe Pearlman, and Giorgio Testi, and executive producer Casey Patterson have done a brilliant job of making this franchise retrospective a smooth ride by avoiding Rowling’s presence, who is as controversial as she’s essential to the foundations of the Harry Potter film series.

In addition to the names mentioned above, actors like Richard Harris, Michael Gambon, Fiona Shaw, Richard Griffiths, David Bradley, Helen McCrory, Warwick Davis, Robbie Coltrane, Maggie Smith, John Cleese, Alan Rickman, John Hurt, Julie Walters, Kenneth Branagh, Gary Oldman, David Thewlis, Timothy Spall, David Tennant, Brendan Gleeson, Helena Bonham Carter, Imelda Staunton, and Jim Broadbent weren’t exactly household names here in India. Yes, those in the cities who had access to international cinema probably knew them. But after Harry Potter, everyone and their moms knew who all of these people were. And in more ways than one, it broadened our understanding of acting, filmmaking, set design, cinematography, and storytelling; which is something that everyone from Radcliffe to Felton acknowledges as well here. That said, it’s nice to see the sight of icons like Oldman, Coltrane, Helena (who’s a laughter riot), Isaacs, Fiennes, and Cuarón talking about how much they learned from the young actors.

3. “The ones who love us never really leave us; you can always find them in here.” – Sirius Black 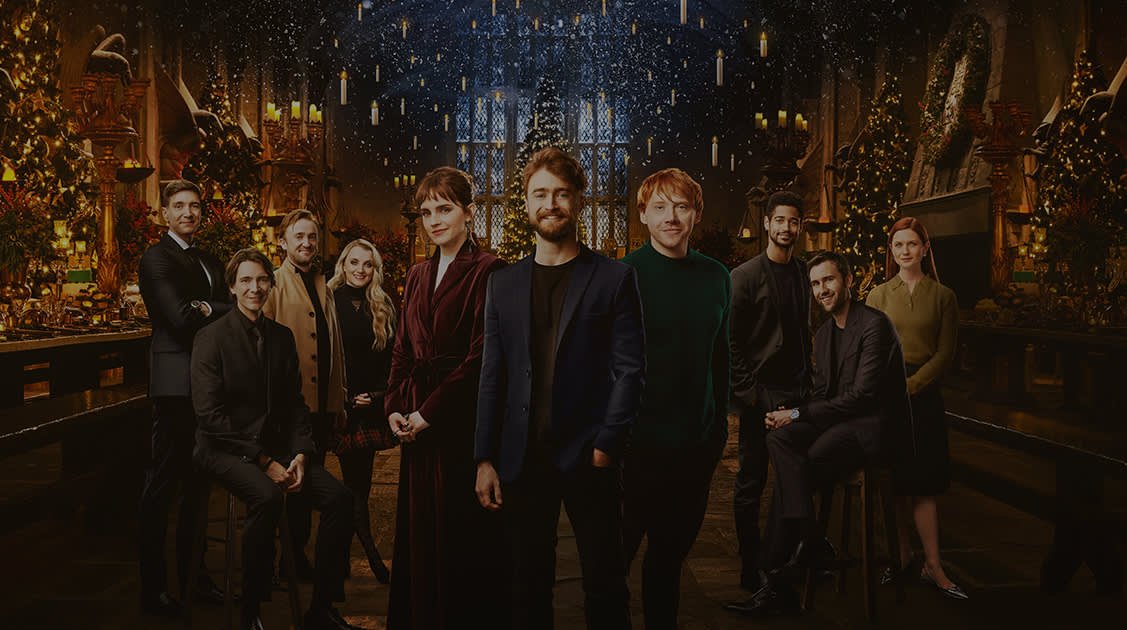 The saddest part of the special is, of course, the in memoriam section. Emma Watson and Rupert Grint put it brilliantly by saying that the loss of Richard Harris, Richard Griffiths, John Hurt, Helen McCrory, and Alan Rickman felt very personal. Which ties back to the notion of growing up as a family or at a boarding school. Because the very nature of the franchise blurred the lines between reel and real. Everyone was growing up with each other. Everyone was spending hours, days, and weeks in the same place. So, naturally, it became more than a job for these people. From the trailer itself, it was obvious that their absence was going to hurt and it did. A lot. Especially Rickman’s. Because back then, a lot of us probably didn’t do the whole act of separating the art from the artist and thought that Rickman was Snape (which he was in a way). But when we became aware of his filmography and binged his interviews, it dawned upon us that the man was giving the performance of a lifetime. And like Coltrane says, now they are going to live on for as long as humanity exists through these movies.

4. The unseen side of the Harry Potter franchise

The special also, for the lack of a better word, humanizes Radcliffe, Grint, Watson, Felton, and the rest of the younger cast. Because, even though it seems like a far-fetched idea, it’s quite possible to forget that they’re actual people and not the literal manifestation of the fictional characters they played. Which can be dangerous for a bunch of actors who have their lives ahead of them, personally and professionally. So, you see Felton and Watson talk about their non-romantic relationship that lives on till this day. You see Radcliffe’s hilarious yet adorable love letter to Bonham Carter. You see Grint talk about kissing Watson as if it was a horror movie scene. And finally, you see them remembering their moments of existential crisis due to the fame, the attention, and the pressure. Grint, Watson, and Radcliffe say that there were times when they felt confused where their personalities ended and the characters began and vice versa. Which sounds great when seen in an artistic way but is very daunting. However, it’s relieving to see how they’ve worked through it all, together and on their own, to become stable people who are doing what they love.

All eight films from the Harry Potter franchise are available on Prime Video.