Babysitter (2022) is that kind of off-hand experience where one does not know what to expect at any moment. It is a dark comedy that does not quite sit straight; it moves and edges past the convenient grasps of narrative breath. Sometimes it lands, and sometimes it does not. Most of it feels rather forced, almost farcical.

In her sophomore Canadian feature that premiered at the Midnight’s section at the Sundance Film Festival, actress and director Monia Chokri tackles domestic misogyny and casual sexism in a sugary-rush aesthetic. Based on the play of the same name by Catherine Léger, Babysitter adapts a distinct visual language to unevenly dramatize the oppression of women at the hands of men. It’s a tricky, constantly shifting style that favors style over substance. Watch Babysitter on Mubi first and then read ahead so that none of the experience is diluted. Happy reading!

Babysitter opens with a bunch of men shouting and howling at each other in an MMA match. They annoy women around them and ogle at some. Cut to super more closeups of female breasts and butts. It sets the tone of the chaotic frenzy that is to follow for the next 97 minutes of runtime. Soon after, Cédric (Patrick Hivon) lands into unwanted trouble when he forcefully hugs and kisses a female TV journalist who is reporting live from the event. This immediately creates a stir, turning into a Québec-wide uproar and becoming a national debate on sexism. He gets suspended from his job, but his colleague (Hubert Proulx) and his brother Jean-Michel (Steve Laplante) have other ideas.

Together they forge all kinds of ideas to help resurrect the image of Cédric, that he will not only write an apology letter to the journalist alone but to a list of women in the public eye and publish it as a book. The list will include the likes of Beyonce and Kim Kardashian. All this while, Cédric’s wife Nadine (Chokri herself) witnesses the circus with exhaustion, breastfeeding their daughter. 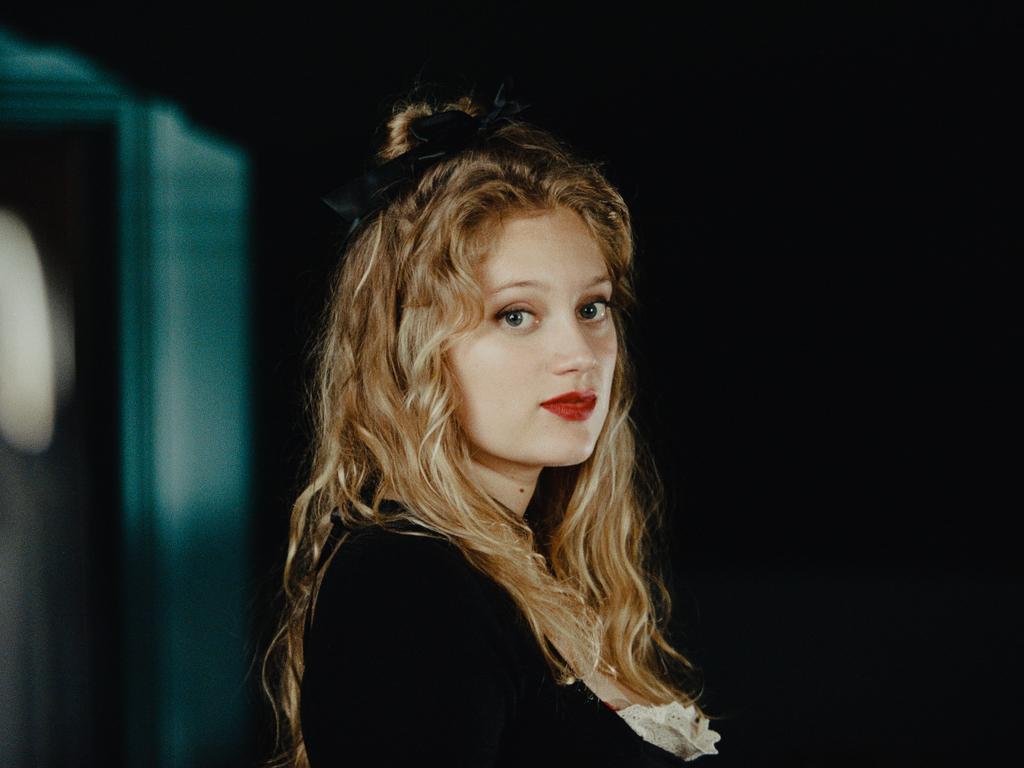 Enter Amy (Nadia Tereszkiewicz), the titular Babysitter inside the madcap house, to take care of the baby that wouldn’t sleep. She turns the table on them all, wearing sensual clothes and talking in a distinctly sensual fashion; she’s Bridgitte Bardot meets Marry Poppins, who manages to create a spell on them all.

An eccentric collision of energies follows as the characters express themselves too much for their surroundings. Soon we will learn that Nadine is escaping her home and leaving the baby in the Babysitter’s care to find some solace in a motel. She suddenly wears a lavender cape costume and keeps herself busy at home. Cédric, who is mostly confused at the turn of events, struggles to finish his work within this domestic clash of energies.

Babysitter goes along with a pastel-hued aesthetic, as we see Cédric’s book “Sexist Story” getting published. “The problem with misogyny is that it isn’t women,” says Jean-Michel on the TV show. “It’s men.” He even reads an excerpt from the book, which gives us a glimpse of how condescending and baseless the apology really is, with a dash of humor. “Dear Amy Smith,” he begins. “I need to protect you from yourself and your desperation to please.”

Babysitter is brave and ambitious in scope but falters considerably in execution. The constant breaking and cross-cutting of images with a rush of action tends to overwhelm, not always in the desired way. Director Monia Chokri’s visual style does not always sit well with the depiction of casual sexism with a wink of an eye. Babysitter also feels painfully desperate for a film that tries to push the right buttons. Most of the actions- be it the character arcs and the plot points, remain half-baked and loosely structured to the point of losing believable factors. Take, for instance, the ripening of a minor incident into such a national issue, the publishing of the book that manages to raise quick eyebrows, and the other allegations that bring in no such consequences.

What works essentially, though, is how Babysitter makes the bewildering facets of everyday misogyny feel exactly the same through a committed ironical gaze at things. Tereszkiewicz is in fine form, making the most of her broadly coquettish character believable with a dash of wit and warmth. The other performances are mostly just extended reactions, without any dimension allowed for growth. Babysitter relies a lot on these reactions alone, cinematographer Josée Deshaies’ lens featuring closeups and synchronized color palettes that pervade most of the runtime.

Yet, Babysitter often gets the gaze right, strategically shifting the verve into something unnerving about the way the shots jump in speed and time. Babysitter is hyper-realized yet grounded, hypnotic yet temporal, anticipating the #metoo movement with gusto. If only the daring leveled up to the correct amount of storytelling, Babysitter would have fared much better than muddled exhaustion at the end of its saturated runtime.

Babysitter (2022) Ending, Explained: What happens at the book launch?

The end of Babysitter (2022) is daring and ambiguous, not offering any direct resolution for either the characters or the viewers. Screenwriter Catherine Léger and director Monika Chori have given us characters that aren’t exactly easy to establish or understand in terms of temperament. Each of these characters is going through some awakening, where they see themselves in a different light. In the end, Jean-Michel is reading out from the book in the TV broadcast when he can see that the child at home is looking back at him and imitating his words.

The significance lies in how the words are transferred from one generation to the next and how our words carry coded messages. So Jean-Michel uses his following words very carefully: “Once my sacrificed love has quelled the coming storm, and you are, Amy, finally free from the shackles of womanhood, maybe there will be an us.” He pauses. “Maybe. Finally.” Outside, Cédric meets the news reporter eye-to-eye for one last time. Back home, Nadine throws out the trash in the bin for the truck to take, but the dildo hits back at her, meaning that no matter how she tries, male dominance will still be present in her life withstanding. She sees the girls skate in the neighborhood freely, and the screen freezes.