Bad Sisters (Season 1), Episode 3 Recap & Ending Explained: Perhaps a little early to speculate but the third episode of Apple TV+’s ‘Bad Sisters’ points at an emerging formula that the series will possibly follow, at least for another episode. The present-day scenario largely deals with Thomas’s investigation and Matt’s romance with Becka while the flashbacks show the extent of JP’s diabolicism towards the sisters and their consequent plans to murder him. This doesn’t take anything away from its sense of humor or its style at all though. In fact, in the 160-odd minutes of the show till now, there has not been a single moment that can be called even remotely dull.

The burning down of the cabin distresses Eva but Bibi’s determination remains unfettered. Becka’s loan has fallen through so she decides to rope in JP’s mother, a well-off old lady, as a possible investor in her massage parlor. Eva suggests that they poison JP the next time they try killing him. For this, Bibi wants to include Ursula in their plan as she’s a nurse and will therefore know better.

Ursula is photographed by JP, coming out of a hotel with her boyfriend, Ben, after a rendezvous. He slut shames her before asking her to end the affair lest he rats her out to Donal, her husband. Realizing that she’s cornered, she decides to inform Eva about her affair. Bibi overhears and pounces at the opportunity to make her join them but Ursula is utterly against their mission so she refuses. A few days later, at a family gathering, when JP tries to tell Donal about this, she tells JP that he’s ended it with Ben, making him gloat at his power over her. At Eva’s place on Easter, JP finds out that Ursula lied to him when he catches her texting Ben.

He secretly changes Ben’s number to his own when he realizes that they’re having a sexual conversation. Following this, JP asks Ursula for her nude photograph. Not realizing that it isn’t Ben, he sends her a photo of her vagina where her face is visible too. When JP reveals his deceit, Ursula is disgusted and petrified. JP acts on his threat and sends the photo to Donal. When Ursula comes to know about this, she frantically drives over to Donal’s workplace and manages to delete the photo along with JP’s sympathetic messages just on time.

In the wake of this, Ursula joins Eva and Bibi. She supplies them with Metildigoxin, a poison that causes fatal cardiac arrhythmia. Eva and Bibi inject it into a slice of the liver which the former replaced with the one in Grace’s refrigerator. The plan doesn’t risk Grace or Blanaid’s life as neither of them eat liver. 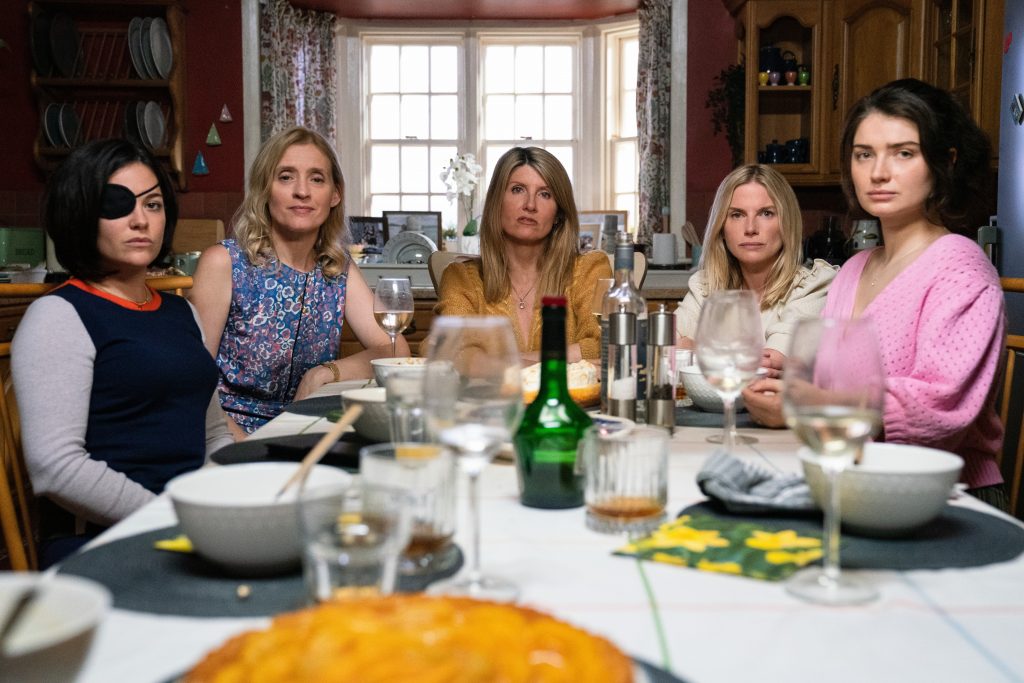 In the present day, Thomas continues his investigation. He and Matt go to Ursula’s house next, with the information about her accident with JP’s car outside the hotel where he had photographed her with Ben. When questioned about why she was at the hotel, Ursula lies about meeting a friend there while feigning ignorance about JP’s presence at the same place. Thomas snoops about her medicine cabinet and photographs its contents of it. When Thomas suggests that she was having an affair with JP, she’s disgusted at the idea and hence lets her dislike for him slip out.

Thomas has also gotten a hold of a detective inspector, someone their father knew and apparently had a cordial relationship with, to sanction the postmortem. Becka has her first date with Matt, who takes her to play boules with some old men at the beach. There she learns that a friend of Matt’s ran off with his fiancee.

When Grace is preparing the liver for JP, a guilt-ridden Ursula calls her for no good reason. This disturbs Grace’s attention who drops the liver on the floor and then wonders about what she should do with it. Eva, Bibi, and Ursula, nervous wrecks the following morning, wait for Grace’s call. When she does and tells them that ‘He’s dead’, they presume that they’ve successfully murdered JP. Soon enough though, they find out that it was Oscar, Blanaid’s dog, that they ended up killing as Grace fed the soiled liver to him. The sisters are absolutely crestfallen at what they’ve done.

At the end of their date, Becka takes Matt to a spot from where the property she was to turn into her massage parlor is visible. She longingly tells him that she was supposed to be helped out by a family member in realizing her dream but that didn’t happen. Eva, Bibi, and Ursula meet again, discussing the risks that Thomas’s investigation is opening up for them. They will stick to their plan of backing each other’s stories, which they believe will work, as long as Becka doesn’t compromise them.