Bad Sisters (Season 1), Episode 8, Recap: Traditionally, what makes a script strong is its ability to tie all its threads together and not waste any character or action in the larger scheme of things. The writing of ‘Bad Sisters’ has been fairly taut from the beginning, but now, with the less significant characters from earlier assuming important roles in what is about to unfold, like Roger or Ben, is making this aspect of it truly shine. Some work still needs to be done, though, on how Matt and Thomas’s story is inserted into each episode so that it doesn’t disturb the emotional investment it otherwise earns so well when dealing with the storyline before JP’s murder.

A few years prior to JP’s death, he goes to ask for money from his father, George, while JP is facing some financial problems. George guilt-trips him about not visiting his mother enough, then sadistically teases him about this one time when Minna dressed him up in JP’s sister’s clothes before refusing to help. As JP is leaving, George accidentally swallows a button. JP rushes over to help his choking father, then decides not to. George, therefore, dies.

Becka tells her sisters about her shocking finding. She surmises that JP killed George and goes over to check on his father’s corpse in the freezer to see if nothing has gone awry on Fridays when he drops by his mother’s. According to Becka, JP hid the body and spread a rumor about his father abandoning his mother to ensure that his mother didn’t inherit George’s wealth in the wake of his death. The sisters initially plan on handing JP over to the law but realize that should he go to jail, and Grace will stand by him and then wait for his release. Becka suggests killing JP by locking him up in the freezer the next time he goes over to Minna’s. The other sisters are unsure, so they go to Minna’s house to check for loopholes. The freezer gets cold enough and is soundproof, but Eva refuses nonetheless, stating that she could hear Bibi’s voice when they locked her inside for a sound check. 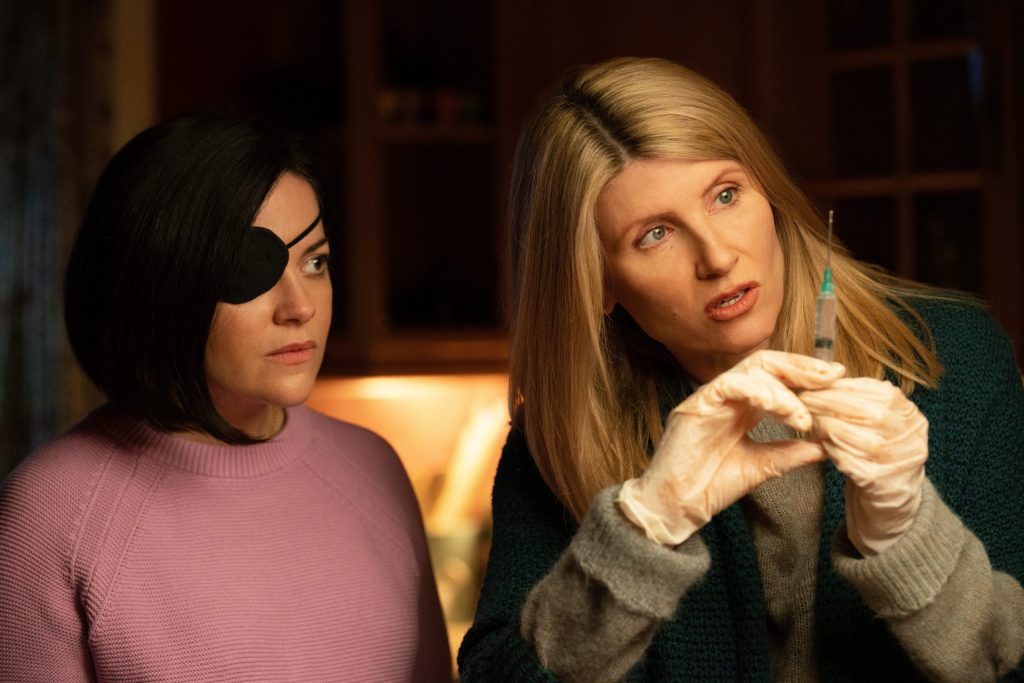 At work, Gerald doesn’t give Eva the promotion owing to everything JP’s been feeding him about her alcoholism and emotional instability. Eva is heartbroken and realizes that JP must’ve told Gerald about her rehab to have gotten the promotion despite how well she did in the interview. JP gets it instead, making him her boss. One day, when JP tells Eva to behave properly with him when they’re in the office, Gabriel gets annoyed and follows him to the washroom to confront him. To rile Gerald up, JP tells him that Eva told her entire family about his homosexuality. JP gets handsy with Gabriel to intimidate him, at which point Gabriel beats him up and leaves. Eva follows him out of the office, where Gabriel states his disappointment at his private life becoming a matter of gossip for Eva and angrily leaves, breaking up their friendship.

Grace meets Roger as he’s washing off the words ‘PEEDO’ written on his wall (JP’s doing, though not something Roger knows). Ursula doesn’t believe what is being said about him and confides in Roger about JP’s ‘suicide’ attempt. Roger goes to talk to JP about this one night, but he turns him away rudely by bringing up the recent accusations against him. As Roger looks on, it seems like he’s onto JP being behind his defamation.

Ursula goes to meet Ben, where he shows her a new house and tells her he wants to buy it. He plans on making Ursula leave Donal and move in with him, along with her children. Ursula tells him that she can’t see him anymore because of the photo that JP has. Ben is livid and wants to kill JP, but Ursula calms him down.

At Bibi’s place, Becka informs her about going ahead with her plan of locking JP inside the freezer at Minna’s place. She is tired of being treated as a child by Eva, which Bibi justifies as being a result of the maternal concern she has for her. Ursula, too is on Becka’s plan.

In the present day, JP’s body is being dug up as Thomas eagerly waits for results and texts Matt, asking him to come over. Matt goes to Becka’s place to reconcile with her, which he succeeds in doing. When they’re about to have sex, he has trouble arousing himself, so they stop, and when he’s in the kitchen, kicking himself, Becka reads Thomas’s message about the exhumation. She rushes to the cemetery to confirm if it’s true after Matt leaves, then informs her sisters about it, who are alarmed by the news. When Eva finds out that Becka is seeing Matt, she is infuriated, which leads to a fight between Eva and Becka. Eva is distraught at a comment Becka makes, following which she asks all her sisters to leave her alone.

Back at Thomas’s place, Theresa tells him that Matt is in love with Becka, something Thomas doesn’t believe. Matt informs Thomas that Becka knows about the exhumation because of his text. Thomas follows the doctor who was in charge of the exhumation to coerce an answer out of him, but he refuses to give him one.

On Friday night, Becka goes to Minna’s place and gives her a piercing, something the latter always wanted but never got, especially out of fear of what JP might say. She then goes down to the basement and waits for him. As JP is going over to Minna’s place, he is stopped by Ben, who beats him and threatens him not to expose Ursula’s photo lest he actually kills him. Someone enters the basement and goes into the freezer, at which point Becka locks that person inside, waits till the next morning for them to die, then takes the key out and leaves it where it usually is. She goes to Eva’s place to inform her that she has killed JP.

In the present day, Thomas is told about the results of the exhumation being inconclusive.

Blonde (2022) Review and Ending Explained - How Does Norma Jeane Die?

Everything Coming To Amazon Prime Video in October 2022