"All You Can Eat Buddha" is left open for interpretation and you can choose what you wish to believe in. Ian Lagarde's confident screenplay and direction make the whole gamble of gluttony mixed with spirit and its implication on human core emotions worth a surreal experience.

As interesting as the title “All You Can Eat Buddha” sounds, the film gets even more intriguing & weirder every passing minute and gradually drifts into an unknown space until it becomes an entity of its own. Like the other world governed by some mystical power. Or perhaps some spiritual power. Or the power of gluttony.

The opening scene in itself is so incredible that it feels like a warning from debutant film-maker Ian Lagarde for the bizarre events that unfold leisurely. The film opens to a camera focusing on silent & still blue waves of an Ocean. Resembling an allegorical prison that is deep, keeping dirty secrets under its dark belly, and melancholic on its surface. It is coupled with an eerie music in the background that progressively increases to a point that it gets uncomfortable.

Mike, the eponymous character played flawlessly by Ludovic Berthillot, wears a calm and powerful demeanor. He looks like a reincarnation of Lord Buddha, except that his expressionless face adds more mystery to his personality. From (not so) welcoming scene by the attentive staff of El Palacio to a weird dance performance and social gathering around the scenic oasis, nothing feels normal even if everything looks usual. Mike is lonely and aloof. Constantly wandering, observing every small event in the hotel like a deity.

Lagarde’s narration takes a wild twist after Mike saves an Octopus, and the whole plot plunges deep into surrealism and tweaks TV’s prophecy about “dreams become reality” into dreams turning into a nightmare. The whole “speaking” octopus encounter shifts the momentum and turns the narration into an exploration of internalized human complexity. It appears as if Octopus obscurely latched his tentacles on Mike to get hold of his consciousness. Mike, who used to not eat properly earlier, turns gluttonous. He devours everything in sight. His skin turns sensitive to the sun. His daily activity is reduced to eating and sleeping and gazing long hours over the ocean. 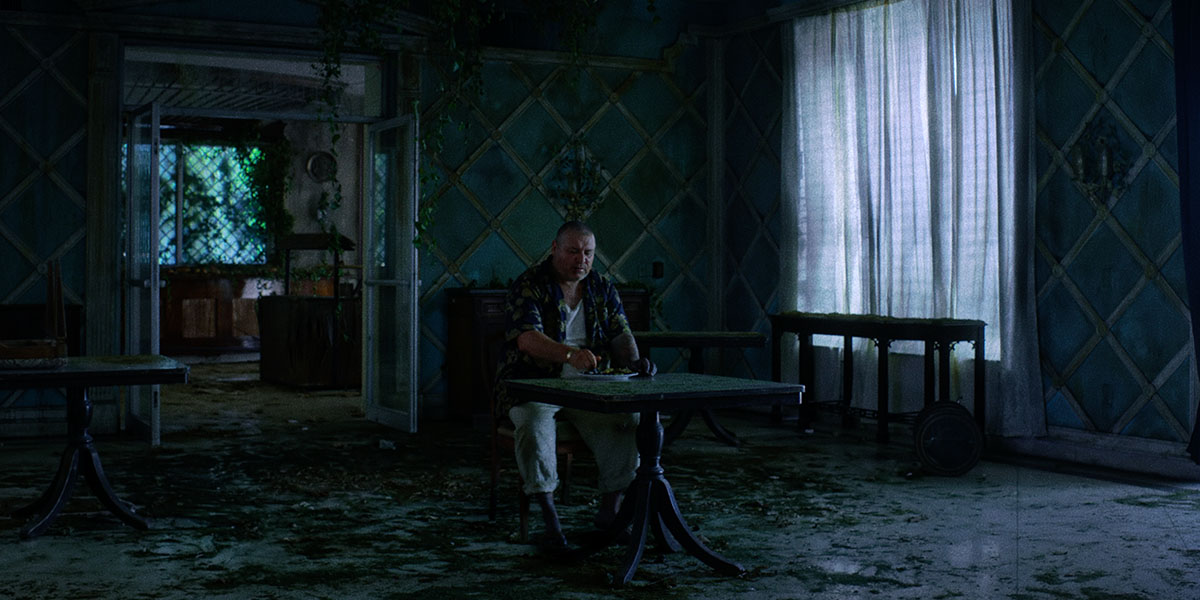 Mike performs a few small miracles that attract the attention of spectators. Like the one where he talked Claire into eating who has lost her appetite for six months. He is looked upon as a  miracle worker, a divine body that could heal everything. But he doesn’t want to attract any attention and wishes to be left alone. His subtle conflict with his own body and spirit eats his own rationality leaving him hunger for anything that comes on his way, even the human intestine.

Gluttony creeps in when our desires spiral out of control and get excessive with food. According to Buddhist Scholars, if gluttony cannot be conquered, any ambitious spiritual pursuit is doomed to fail. And that is what exactly happens with Mike and gradually El Palacio is turned into shambles. “All You Can Eat Buddha” is left open for interpretation and you can choose what you wish to believe in. Ian Lagarde’s confident screenplay and direction make the whole gamble of gluttony mixed with spirit and its implication on human core emotions worth a surreal experience.

‘ALL YOU CAN EAT BUDDHA‘ PREMIERED AT THE 2017 TORONTO INTERNATIONAL FILM FESTIVAL UNDER THE ‘DISCOVERY‘ SECTION.
CLICK HERE FOR OUR COMPLETE TIFF COVERAGE.