Chopsticks is a film which happens when you want to present the viewers with an immersive experience but consistently shy away from indulging in the greater dynamics of storytelling. There are a few cardboard characters in the film, one of whose name sets off a flurry of unconvincing and often forced jokes, who fail to evoke a sense of oneness with their presence on the screen. Just like what happens in the oft-mentioned chop shops, the film too becomes more fragmented and disintegrated as it nears its denouement, and ridiculously nosedives in the end.

Director Sachin Yardi’s vision of the dreary underbellies of Mumbai is clouded with his need to somehow vindicate the flawed central character Nirma Sahasrabuddhe, played with a perpetual insecure look by Mithila Palkar. Apart from the fact that the film becomes utterly predictable in parts from the moment the plot incitement takes place, the character of Nirma is said to change over time with triggers too underwhelming for manifest change. She suffers from a lack of self-confidence. The too-charming-to-be-true conman-cum-chef named Artist, played by a smirking Abhay Deol reminiscent of the Dhoom villains minus the bikes and brawn, reinforces a sense of belief in Nirma by subjecting her to trials. On the other hand, veteran Vijay Raaz essays the role of Fayaz bhai, boss of the badlands. 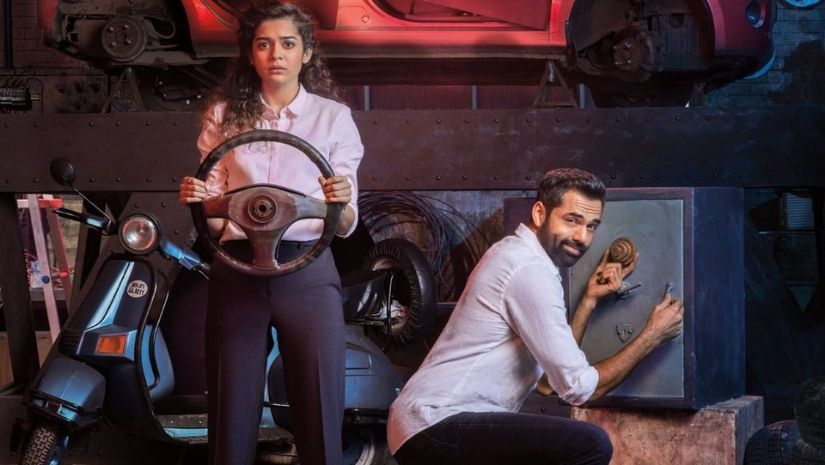 Yardi constructs standalone set pieces which are often hilarious and more often ridiculous. One of the most unconvincing scenes is when Artist makes a group of gaudy musicians playing for a politician revelling by blocking the traffic, play the national anthem, and everything comes to a standstill and the politician’s cavalcade moves away. I wish it was this simple to clear roadblocks in India. From the very onset, Artist is depicted a know-it-all guru who not only breaks locks by listening to their ‘heart’, but also brings about an overhaul in Nirma’s personality. He preaches to him, rushes to her help, risks his life to help her. But, it seems incredulous that a conman goes so many extra miles just to help a random girl who can speak Mandarin. Chopsticks might appeal to anyone who is ready to take everything in the movie with a pinch of salt. Nirma, who was pushed to the margins in her workplace because of her lacklustre personality and for being who she is, is suddenly accepted by her superior for the same reason she was censured. Sure thing, if Mumbai was Disneyland.

The character of Fayaz Bhai is like a drawing room showpiece. He neither instils fear, something common to gangsters, nor does he provide any layer to the story. His only identity is his love for a goat named Bahubali. It is palpable how the envious acting acumen of Vijay Raaz falls into a trap of poor filmmaking. Every good story must make the viewer physically realise a sense of loss, belonging and achievement. Chopsticks does none. Nirma’s overwrought monologue to Fayaz Bhai in the end, where she talks about the sense of dearness and possession, stems from a space only known to the director. The viewers are seldom offered a window to Nirma’s mind.

The third act prepares grounds for a standoff between the Artist, Nirma and Fayaz Bhai. But, immediately when the tension crests, the director conveniently makes the graph plummet. Whatever little credibility a sensible ending could have lent the film, is snatched away in the director’s attempt to somehow present a happy ending.

The film, with its talent pool of leads, could be a lot better than what it actually is. This is especially important because when you are streaming on a global platform like Netflix, it is expected that your content will be a notch higher than average. It can be safely said that Chopsticks is not a good addition to India’s Netflix Original journey.

Honeyland [2019]: 'Sundance' Review – An Exceptional and Unembellished Tale of a Woman’s Connection with Nature