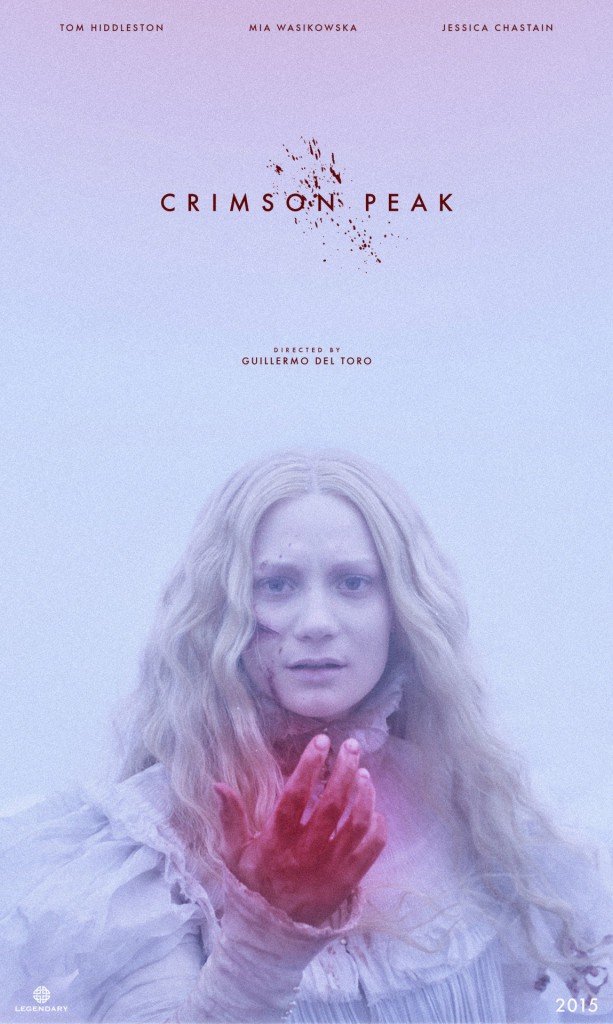 Goths, the East German people, were said to be the ones who played a vital role in the fall of West Roman Empire (around 3 or 4th century AD). In Scandinavia, a tribe named ‘Gutes’ formed a community, whose inhabitants are still living in today’s Sweden, in an island called Gotland. The word Goth, in those times was related with something barbaric or warmongering. Later, in the 12th century, the word ‘Goth’ reemerged in the form of a medieval architecture (succeeded by Renaissance architecture). In literature by the 18th century, the word ‘Gothic’ ruled. Romantic-Horror fictions unfolded in old, dilapidated Goth architectural buildings. Bram Stoker, Edgar Allan Poe and Mary Shelley were prominent writers of the Gothic stories, whose form of romanticism and influences have reverberated throughout the Post-Victorian era to modern day cinema. Let’s also not forget the Gothic rock culture of 1980’s England and the Goth subculture, which is a branch of punk genre. Guillermo del Toro’s magnificent use of the cinematic medium to concoct the Gothic images in “Crimson Peak” (2015) appears to pay a fitting tribute to this word, which has for centuries left its footprints in European culture & history. Alas, in the end, what a disappointment it turned out to be. Not because it had a pedestrian story-line (which I expected); but because at no point, I could feel the most vital primary element of a Gothic story – an escalating atmosphere of dread.

Visionary filmmaker Guillermo del Toro always possesses this romantic vision of ghosts and other macabre things. With “Devil’s Backbone” (2001) and “Pan’s Labyrinth” (2006), he proved that he is a master in creating brooding atmosphere. He sees ghosts and ghastly creatures as something stuck in the past. Class conflicts, greed and sexual frustration play a strong role in his character’s decisions. Innocent people or children always get caught in the middle as a result of the devious plans of ruthless idealists or con-artists. Del Toro also wonderfully masks the subtext, metaphors and allegories within the seemingly simple story. Take “Devil’s Backbone”, where an unexploded bomb remains quietly in the center of an orphanage, which becomes a metaphor for the ghastly future events. Remember, how he wonderfully staged that clash between tyrannical (fascism and religion) and divine elements (unbridled imagination and youthfulness) in “Pan’s Labyrinth” or his debut feature “Cronos” (1993) (which is a little clumsy in its tone), where the obscure invaded into a peaceful, naturalistic atmosphere. “Mimic”, “Blade II”, “Hellboy” and “Pacific Rim” were all made for big studios and so it would be futile to expect subtle meanings, but with “Crimson Peak”, Del Toro seemed to have once again returned to his most adept way of storytelling. Nevertheless, the watered-down (or should I say clayed-down?) narrative couldn’t keep anything subtle or sublime. 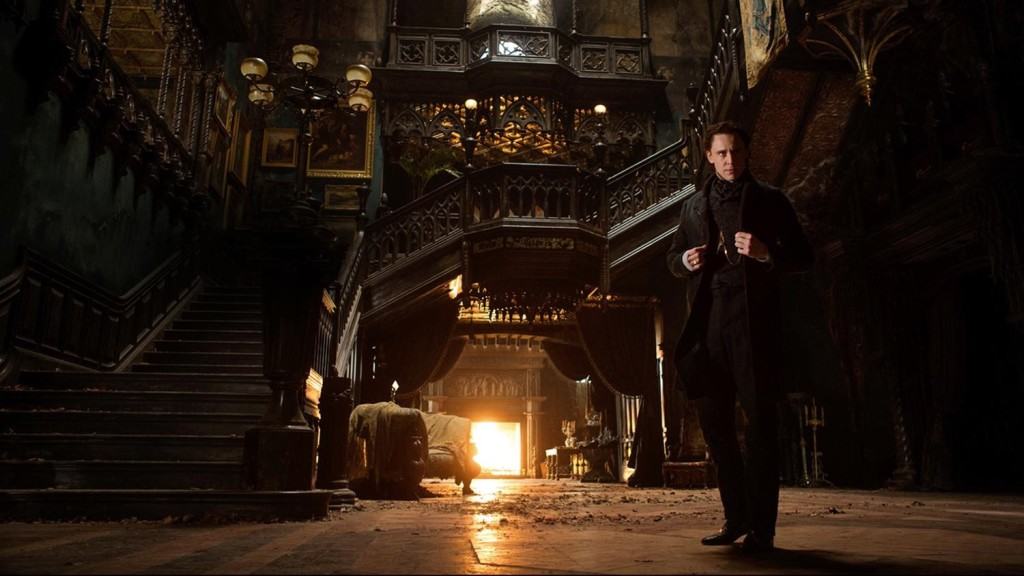 “Crimson Peak” is set at the turn of 20th century in Buffalo, NY, where our typical Gothic heroine (an innocent fiction-scribbler) Edith Cushing (Mia Wasikowska) is swept away by a charming English Baronet Thomas Sharpe (Tom Hiddleston). Tragedy follows and our protagonist is deported to Cumberland, England as Sharpe’s wife. Thomas and Lucille Sharpe’s (devious sister played by Jessica Chastain) huge, crumbling manor (called ‘Allerdale Hall’) suggests that some perverse realities are hidden around and that some gruesome apparitions are waiting to unmask the truth. The story is as simple as I expected and bundled with some nice, subtle references & homages: deranged siblings – Poe’s ‘Fall of House of Usher’; the emphasizing old school iris shots; Before Edith seals her fate by passionately kissing Thomas, he recites lines that has some similarities to Edward Rochester’s dialogue in ‘Jane Eyre’; the cob-web draped settings of Britain’s ‘Hammer’ films; the graceful movements of camera and a saturated style pays fitting tributes to old horror masters like Mario Bava, Roger Corman and Dario Argento. However, in many occasions Del Toro underlines his literary references in an emphatic manner.

There’s a reference to Jane Austen & Mary Shelley at the start, where Edith answers to someone’s patronizing question as “I’d rather become next Mary Shelley because she died a widow” – a reference to the future events. Edith finds Arthur Conan Doyle’s book in the shelf of her amorous childhood sweetheart Dr. Alan McMichael (Charlie Hunnam) and asks “Fancy yourself a detective?” The same doctor becomes a detective in the later part and puts together the pieces to come and rescue Edith. When the protagonist eulogizes on how she dismissed the warnings to chance upon the very thing she is warned about, we see a moth getting attracted to a fire-lamp. There are many such ‘on your face’ references or images. Edith assures her publisher “It’s not a ghost story. It’s a story with a ghost in it”, which seems to be an explanation the director is giving to an expectant viewer (don’t forget the line “Beware of Crimson Peak”). Edith says ‘Ghosts are a metaphor’ and the precise nature of this statement makes the macabre, careening ghost, a mere distraction to the proceedings rather than being a metaphor. In the end, when compared with subtle references and astounding visual palettes, the ‘on-your-face’ citations become an obstacle, forbidding the build-up of a brooding atmosphere of fear. 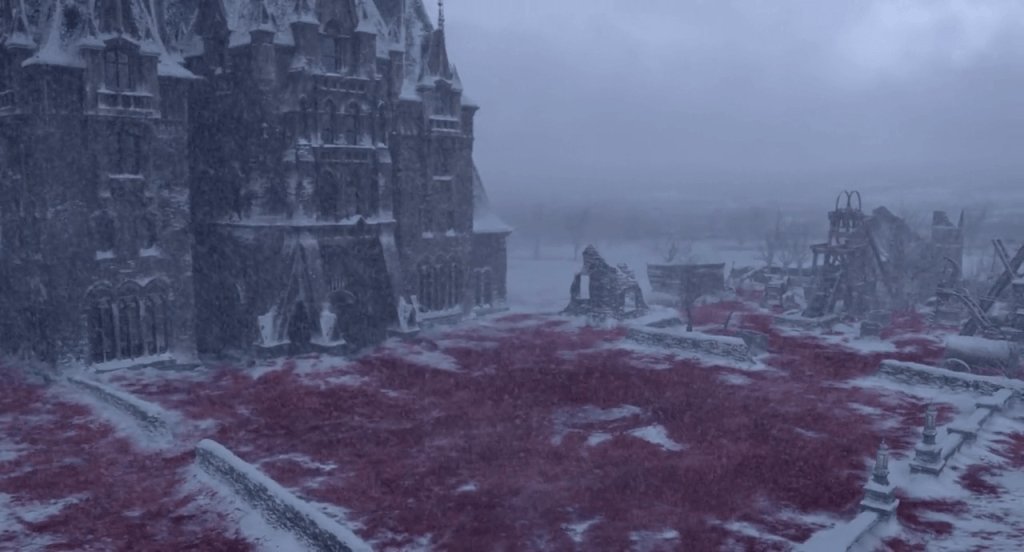 Mia Wasikowska as Edith Cushing certainly looks to be a good choice. She has the innocent, naive looks. But, when the story travels to the decaying Gothic house, an intensifying sense of hysteria is expected from her character, which I think she never conveyed convincingly. Even the conveyance of torments of love seems to be missing. Compared to the scene-stealing presence of Jessica Chastain and Hiddleston (their characters too never emerge beyond types), the performance of Wasikowska falls flat. Her transformation to an indomitable spirit in the end has zero impact on us.

Despite all such flaws and misfired elements, Crimson Peak’s painterly frames are a delight to watch (cinematographer: Dan Laustsen). The delicate visual details (Production designer: Thomas Sanders) of the crumbling manor itself made my eyes widen in awe. There are the usual Del Toro trademark imageries: the moths; killing by bludgeoning one’s face; a teetering apparition. However, the most amazing imagery is that of a vast expanse of snow-filled land which is gradually soaked with mineral-rich red clay. The visual sensibility in each sequence makes us deeply contemplate at what an opulent, Gothic masterpiece this film would have been, if not for that weak, unengaging and box-ticking screenplay.