The trend of remaking south Indian movies has existed since the 70s in Bollywood. Great scripts and meaty roles have always inspired many directors of the Hindi film industry to pursue these projects from down South. In the same league, Akshay Kumar starrer Cuttputlli (what-an-odd way to spell the word which means a puppet) is a remake of 2018’s Tamil film Ratsasan which means Demon.

An audience digs a good crime thriller. It’s an added bonus if the story maintains some kind of suspense throughout. However, the lack of originality and an unclear vision of how to approach these stories has mostly resulted in a complete failure of such movies in 2022. Of course, a few notable films might have made some head turn, but I wouldn’t call those films great work that caters to genre enthusiasts.

Coming back to Cuttputlli, the film could have accomplished so much if only the creators had put their best foot forward in retelling the story of a serial killer seeking vengeance. What we get instead, is a bland representation of a possibly good crime story, that will only cater to the less casual movie-watching audiences.

In the following piece, I talk about what happens in Cuttputlli, looking at its plot and ending in detail. The article contains spoilers, hence read it at your discretion.

Cuttputlli begins with an ironic conversation where two men on a morning walk are talking about the reduced crime rate due to the upcoming election in Parwanoo, Himachal Pradesh. However, they soon find a dead girl’s corpse when their dog picks up the foul smell. The news spreads like wildfire and the people of the town gradually grow scared of the presence of a potential serial killer who is on a spree of killing young school-going girls.

We are soon introduced to Arjan Sethi (Akshay Kumar), who has always had an inclination to study the psychology of serial killers. Being the son of a police officer, he would often have access to different cases his father was involved in. Hence, post his graduation, Arjan started to work on a screenplay involving them, but is rejected by several movie producers who mostly complain about the lack of comedy scenes that can tingle their desired audiences.

During a home visit to celebrate Rakhi, his sister and brother-in-law coerce him to take a job in the police force. Disappointed by the constant rejections, he agrees to accept the position offered on compensatory grounds. After a written examination and thorough training, Arjan Sethi joins as a Junior Superintendent in the same branch of Kasauli where his brother-in-law is posted in. However, nobody takes him seriously and assigns him odd errands of buying stationeries for the police station instead.

On his first day on the job, Arjan comes across a case that incites him to no bar. He notices the pattern of a gift box being left at the crime scene and instantly links the murder of this teenage girl with the one in the opening shot. When he tries to explain the similarity of the two cases to the SHO – Gudia Parmar (known for her short temperament and fierceness), she refuses to entertain his theory because in the first case, they found no gift.

However, Arjan is confident there is a serial killer involved and is determined to find the truth. Hence, he visits the Parwanoo police station to enquire about the gift box. From there on, he finds his answer in the school where the girl from the first case was abducted. He learns that a gift box was left behind by the killer, but since it was left at the school gate, the school guard had kept it in the lost and found section after nobody claimed it.

While the SHO fails to understand the leads, Arjan grabs the attention of the DSP with his detailed analysis of both cases. On the other hand, the post-mortem detail suggests striking similarities in both the dead bodies. Seeing this could get them somewhere, the DSP appoints Arjan with the case and orders him to find out the killer before he prowls for the next victim.

What follows, sort of twists the narrative of Cuttputlli as we are introduced to a strict Math teacher in a school where Arjan’s niece, Payal goes. The film at this point establishes this character as a pedophile who molests girls who are vulnerable and academically weak.

While the entire class is dismissed for the scheduled magic show in the school, Purushottam Tomar (the math teacher) asks Payal to stay back. He mentally tortures her so that she believes she deserves the punishment he is about to give. At the same time, a girl who has previously been a victim of the teacher’s horrendous act notices Arjan and his police forces on the school premises. She exposes everything to him, helping Arjan catch the culprit as he is trying to molest Payal. 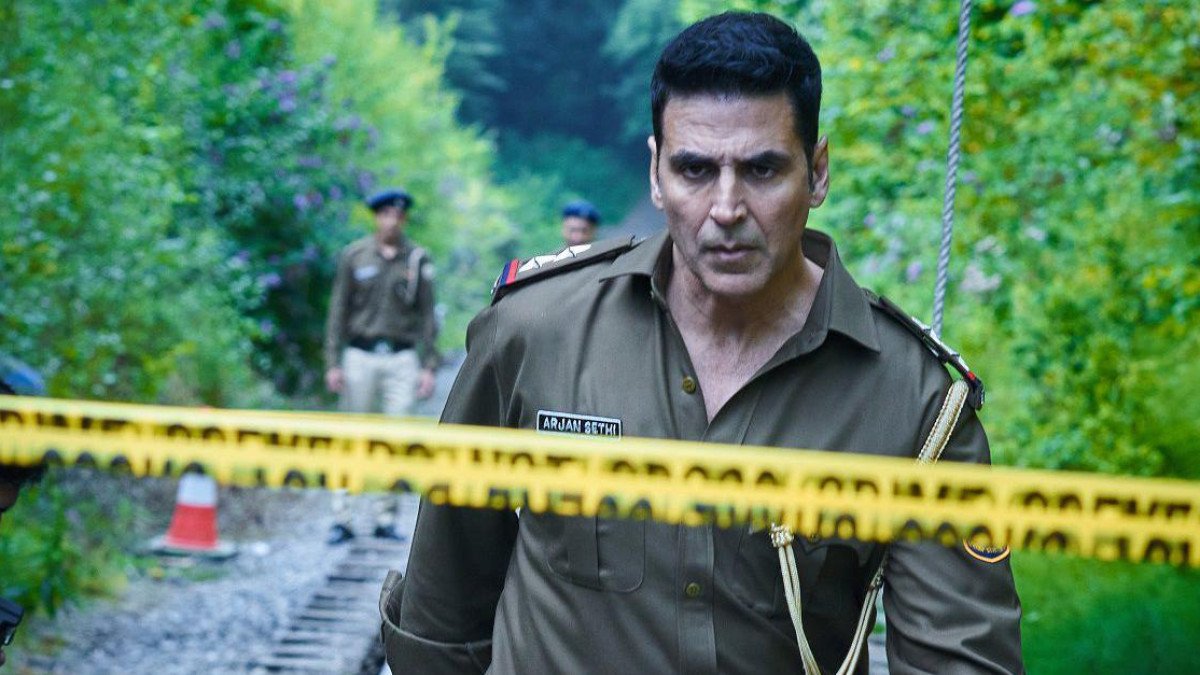 Is Purushottam Tomar the killer?

Arjan loses his temper and constantly kicks Purshottam on his crotch which lands him in the hospital. Arjan and his brother-in-law try to make the culprit admit to his shameful misdeed, but he denies being the serial killer, admitting that, he did actually molest and groom young girls for sexual favors.

Since Payal had just turned 16, her family decided to throw her a big party hoping it would help her escape the trauma of the incidents that previously transpired. Things turn downhill once Arjan receives a panic call from the hospital that the suspect is trying to escape. Arjan reaches the hospital to witness that Pursushottam has held the SHO captive at gunpoint and is trying to escape. Somehow, Arjan is able to intertwine as he shoots Purushottam to save his boss.

On the other hand, Payal goes missing from the house, indicating that the serial killer is still pretty active, and is definitely not Purushottam Tomar. A quick turn of events leads us deeper into the investigation to no end result. The victims’ family is completely devastated by the killer’s motive, and the entire police force is now deployed for the case. While trying to leave for the Police Station, Arjan notices a blood-stained plastic sticking out of his car’s trunk. As much as he wants to believe it has nothing to do with his niece, he opens the trunk only to find her corpse.

Payal’s murder triggers and deeply unsettles Arjan as he now becomes determined to find the killer in spite of being suspended for firing a firearm inside school premises. While spending time with Divya (Rakul Preet Singh, introduced earlier as Payal’s English teacher and possible love interest), he discovers that the hearing aid that her niece wears can record sound. Connecting the dots from there on, he goes to the hospital, where he finds similar hearing aid that one of the victims used to wear.

After listening to the recording of the victim screaming in excruciating pain, Arjan notices a piano piece. He takes it to the radio station hoping someone could help him recognize it. After multiple attempts, one student calls in and informs that she heard this in a magic show held earlier in her school. With that clue in hand and after piecing things together, he goes straight to the police station where he tries to convince the SHO to help him find the killer.

Cuttputlli Movie Ending, Explained: Who is the real killer?

Having brought the cursor down to the possible suspect being the magician who has performed in all the schools of the abduction and kills, the police nail down the school where the magician had their last performance.

Arjan’s team soon figures out that the suspect usually targets the volunteers during the magic shows. So, they narrow down their next target to Aisha Khan. Arjan conducts a safety drill in the same school where Aisha Khan goes, in order to ready the girls in case there is an abduction.

While demonstrating the various defensive strategies, Arjan gets Aisha’s phone number so that he can track Aisha through GPS. While following Aisha on her way back home, the strategized plan fails when they learn that they have been following her twin sister instead.

Arjan and SHO Parmar restrategize everything and follow Aisha’s GPS movement. Meanwhile, the magician has abducted the girl, drugged her, and tied her down, waiting for her to regain consciousness. When the girl realizes she is kidnapped, she carefully recalls all the escape techniques that Arjan had taught her. She asks the magician if she can use the restroom. Once alone, she calls Arjan and informs him about her whereabouts.

Arjan instructs her to use the washroom’s window to get out; however, when she follows his directions, she finds herself in a room identical to the one she was in earlier. Arjan follows her GPS location and enters the magician’s house. Since every room of the house looks the same, it became challenging for them to find each other. When the magician realizes the girl is trying to escape, she follows her. Arjan follows the voice of the screaming girl, discovering that it is coming from an underground room – only to find the magician trying to kill her. When he attacks the suspect, the latter runs away.

After fleeing the police, the serial killer breaks into Divya’s house. At the same time, the forensics and other investigative team study the entire house for more evidence. And that is when the film’s twist reveals the truth about the killer.

The police finds two passports in the house with the name Agnes Fernando and Christopher on them. Arjan quickly revisits his memories, recalling that Agnes Fernando was arrested for killing young girls and has been sentenced for her crimes. So, he presumes that the serial killer they are after is Agnes. While the police check for more evidence, Arjan, on the other hand, decides to go to Divya’s house to check up on her. When he gets to her place, he hears Divya screaming.

When Arjan tries to catch Agnes, she uses magic tricks and takes Divya’s niece – Iti, with her. Arjan follows Agnes but gets injured while saving Iti from the killer. However, while struggling to get away from Arjan’s grasp, Agnes’ wig falls off – thus indicating yet another layer of twist.

The reality of Cuttputlli surfaces when Arjan realizes that he is only the puppet of the serial killer. The killer introduces himself as Christopher (Agnes’ son), telling him how his face had a deformity because of a rare illness, and he was always bullied by his classmates for it. That is until a girl showed him kindness and became his friend. He soon fell for her, but she rejected him for his skin condition.

Enraged by the harassment and denial, his mother invited the girl over to her house. The girl apologized for the bullying in the school, but Christopher killed her and scarred her face in the same way his face looked. Later his mother took the blame and went to prison for him.

Twelve years later, his mother gets killed in an accident on her way home. After that accident, he used his mother’s identity and started murdering young girls just for the pleasure of butchering their innocent, beautiful faces.

After telling his story, Christopher tries to harm Iti, but Arjan manages to lure the killer to him, ultimately managing to kill him.

Where to watch Cuttputlli