Netflix’s first German-language original series, Dark (2017–) was, true to its name, grimly fascinating and an ideal binge-watch. Though set in small-town Germany, the series’ deep philosophical dive into a deterministic, predestined world was lapped up by the global fan-base; all of us intimidated by these uncertain times and carrying the fear of future. Of course, the time-travel quotient, the mind-blowing paradoxes it brings, and the threat of an impending (or inevitable) apocalypse added a lot to the show’s entertainment factor. But the beauty lies in how Dark’s creators – Jantje Friese & Baran bo Odar – balanced between the philosophical factors and human elements. At its heart, this is an epic story of multi-generational families withholding darker secrets and an implacable longing for the lost time. Yet making the season 2 of Dark (Netflix) for a hit show could be bit tricky; dealing with the hype that wasn’t there for the first time. And I was wondering how the creators are going to take it forward. Or, in this case, how the endless cycle is gonna be broadened.

The season 2, thankfully, didn’t disappoint me one bit, and in many ways, it was structured more brilliantly than the first season (also it’s must, to refresh yourself with the events and characters from the first season).

Season 1 of Dark kick-started with the mysterious disappearance of young Mikkel Neilsen (Daan Lennard Liebrenz) at Winden, a small-town surrounding by dense forests and identified by it’s looming nuclear plant. The narrative slowly established the three different timelines it is set – 1953, 1986, and 2019 – and the enigmatic the characters from the past, present, and future using the spooky, labyrinthine caves of Winden to traverse the time-stream in 33-year intervals (the solar-lunar cycle).

The season ended with the introduction of post-apocalyptic Winden, set in the year 2052. Season 2 opens few months after the season 1 events and unfolds under the shadow of an impending, mysterious apocalyptic event (supposed to happen on June 27, 2020).

Dark Season 2 prologue also introduces us to the 1921 timeline where all this worm-hole business and the vaguely defined battle between good and evil seem to have started. However, some of the WTF revelations make you wonder about that (as a character says, “Beginning is the end. And the end is the beginning.”) 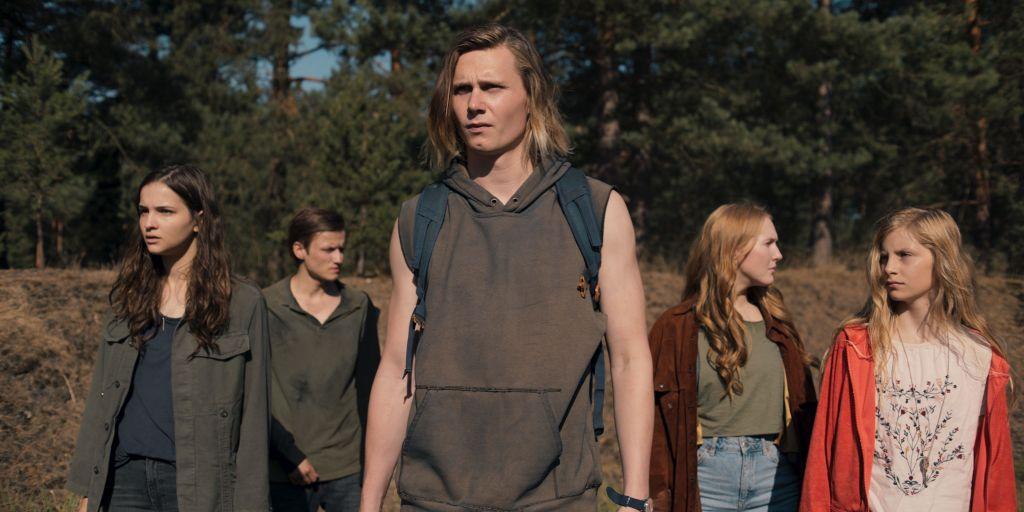 The central story-line follows young Jonas Kahnwald (Louis Hofmann), who is stuck in 2053 Winden (he is trapped there in the previous season finale). The date is June 21. It means he has just six days to find a way to travel back to 2020 and stop the apocalypse. “The past doesn’t just influence the future, the future also influences the past”, goes one of the series’ puzzling remarks, and naturally we see the time-lines 1987, 1954, and 1921 playing a prominent role in Jonas’ upcoming quest.

Meanwhile, the adult Jonas (Andreas Pietschmann), stuck in 2020 with his mother Hannah (Maja Schone), and the older Claudia Tiedemann (Lisa Kreuzer) work in their own way to stop the apocalyptic event.

Both the older version of Jonas and Claudia are also weighed by their loss while yearning for the nostalgic past. Jonas tries too hard to avert the grim fate awaiting his lover, Martha Nielsen (Lisa Vicari), whereas the older Claudia feels guilt over what happened to her father, Egon Tiedemann (Christian Patzold), the retired policeman.

The town’s present-day police inspector Charlotte (Karoline Eichhorn) and her estranged psychiatrist husband Peter Doppler (Stephan Kampwirth) keep pondering over the disappearances of the kids and the police chief, Ulrich (Oliver Masucci), and in the process, they gradually understand the unfathomable depths of the case.

Ulrich’s wife Katharina (Jordis Triebel) becomes obsessed over the cave maps (left by Ulrich) and tries to piece out the mystery. Ulrich-Katharina’s kids, Martha and Magnus plus Charlotte-Peter’s kids, Franziska and Elisabeth also join in on the mission to solve the mystery as they stumble upon a time machine.

The 1987 Egon and 1954 Egon (Sebastian Hulk) are increasingly drawn to the child murders and the man who is charged with the crime in the 1953 case beating/abduction of young Helge Doppler (Tom Philipp), Ulrich Nielsen (the 2019 Ulrich stuck in a prison in the year 1953).

Elsewhere, Noah (Mark Waschke) continues his sinister plan to fulfil the prophecy and we get to look at his master, Adam, an old man with a burnt face, whose real identity tops this season’s list of head-scratching twists.

And similar to the 1st season, we aren’t yet sure who the villains are, since these set of time travelers are just doing things to satiate their desires and deflect the inner pain, which indirectly adds to the clusterf**k situation that continues to impact everything in the past, present, and future.

The single-most interesting factor of Dark is how each scenario keeps awakening the cynic within us, making us yell, ‘Nothing gonna change. It’s all pre-determined’, and yet we continue to root for the characters while hoping to come across that silver lining that might perhaps change everything (in this case, getting out of the time-loop).

When young Jonas goes back to the day before his father, Michael Kahnwald (Sebastian Rudolph) to stop his father committing from suicide, I discerned how it’s going to fail. Despite the number of convoluted bootstrap paradoxes the series boasts, the central paradox is simple: maybe the situation could be resolved if the characters overcome their yearnings, desires and destroy their ego, but those things very much make us human, providing us with the intent to live.

Friese and Odar, however, don’t make us feel the weight of all this philosophizing, as they expertly parcel out the thematic elements through concise statements, mythology, religious imagery, and other visual allusions.

Overall, the season 2 of mind-bending Netflix series Dark once again delivers an intellectually and emotionally simulating viewing experience, which meticulously rises up the stakes and shows no signs of losing steam.