Stranger Things Season 3 has been out for only a week now and it’s already breaking audience records; Netflix has stated that more than 40 million users have already watched the entire season. Consisting of eight episodes of around fifty minutes each, the show’s third season stands out as the most different one so far.

Set during the summer, it introduces new enemies. As well as it introduces new allies whilst also keeping up with the suspense already built during the two previous seasons. Among the biggest changes in Hawkins, Indiana this year, we couldn’t help but pick our favourite new aspects from season three:


If you have not seen the Stranger Things Season 3, please do not scroll further. 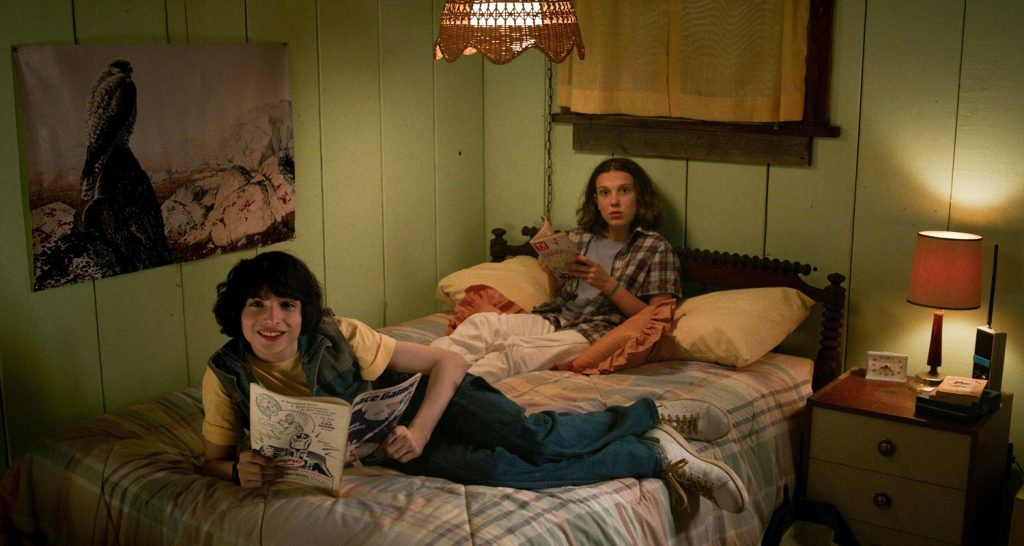 The Duffer brothers have been teasing a romance between the two characters since they were first introduced to each other in season one. But in between fighting Demogorgon and closing portals to the Upside Down, Mike (Finn Wolfhard) and Eleven’s love affair was delayed. During the summer of which is set season three, the relationship finally takes off.

Now as teenagers, the couple has discovered kissing and making out, activities they put a lot of effort and time into, much to their friends and parents’ dismay. But unlike many teenage romances seen on TV nowadays, Mike and El have sincere feelings for each other. And despite looking like an unhealthy co-dependency at first, their relationship relies heavily on trust and maturity, making us support the couple even more.

Hopper and Eleven’s relationship has gone through some ups and downs since they decided to be a family of their own. But as the girl grew from a scared kid to a young teenager who has a boyfriend, things have been confusing for poor, old Hooper. A bit of a gruff, the chief of police clearly has a tough time trying to have a ‘heart to heart’ with the couple.

Mike’s blatant disregard for the cop’s feelings is also not helping the touchy situation, but only making his father instincts more intense; from the protective ‘three inches’ rule to that tear-jerking note at the end, Hopper and Eleven have already become one of our favourite father and daughter duos in TV.

Daughter of Ethan Hawke and Uma Thurman, newcomer Maya Hawke proves herself worthy of her acting genes with the role of Robin. Debuting to wider audiences in the series as Steve’s work partner at an ice cream shop, it doesn’t take many episodes for us to fall under her spell.

Full of charm, humour and empathy, the young actress brings a unique vulnerability and strength to the character. It makes Robin even more likeable and relatable.

Her most powerful moments undoubtedly includes breaking the Russian code and coming out as a lesbian to Steve in 1980s show. Both sequences were heartfelt and real, which in part comes from Hawke’s touching performance. 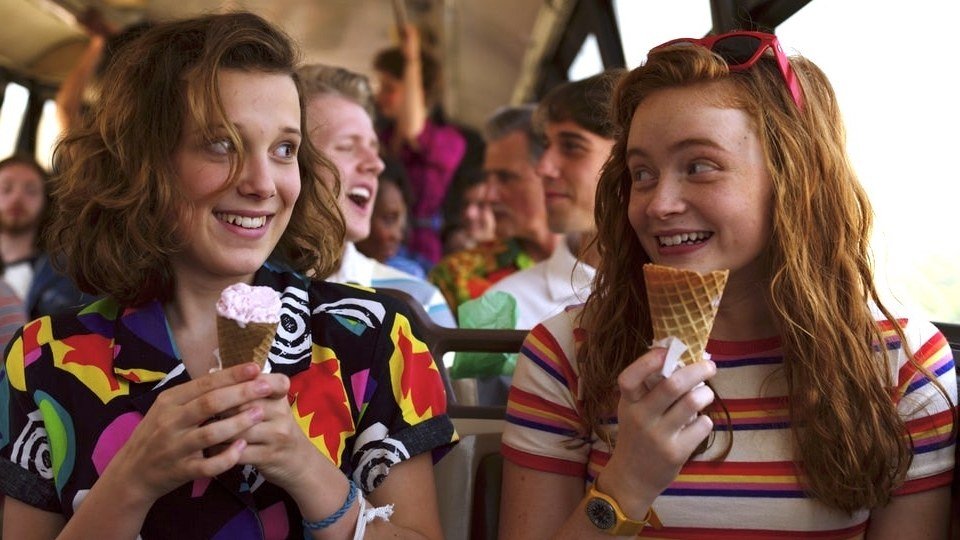 Originally getting off with the wrong foot due to jealousy-ridden reasons, Max and Eleven are now closer than ever. The cold animosity that existed between them is now replaced by a strong friendship in which they bond over boy trouble, Wonder Woman and shopping sprees.

Once Eleven learns that “friends don’t lie but boyfriends do”, Max makes sure the naïve girl’s introduction to the relationship world comes from a totally feminist perspective.

Max teaches El to know her worth and that Mike needs to hold her to a higher standard to which all women should be held. Not only that but the empathy shared by the two girls and the confidence they inspire in which other makes them BFF goals.

Despite having already made appearances at the two previous seasons as a recurring character, Lucas’ younger sister has a much more prominent role in the third season.

Apart from having more screen-time and being included in one of the main storylines, Erica also blessed our screens with powerful lines of dialogue, witty comebacks and lots of determination (“You can’t spell America without Erica” will forever be remembered in our hearts). From taking no bullshit from anyone, being a math whiz, crawling into an air vent and being paid in ice cream, Erica is the American hero we all aspire to be.

Upon having some relationship trouble for the first time in her life, Eleven does what every woman would do: she goes shopping. Her new best friend Max takes the recluse girl on a shopping spree in order to help her find her own style and sense of fashion; not Hopper’s, Max emphasises, and not Mike’s, but Eleven.

For that matter, the two friends resort to The Gap, and it turns out that El has quite a good taste. Getting new clothes helps the young girl on her difficult path to become a real person and not a lab rat anymore; a person with her own personality, opinions and tastes. Finding her style is definitely an important step on that long road. Millie Bobby Brown wears the character as her own and conveys the alienation due to inept social skills remarkably. 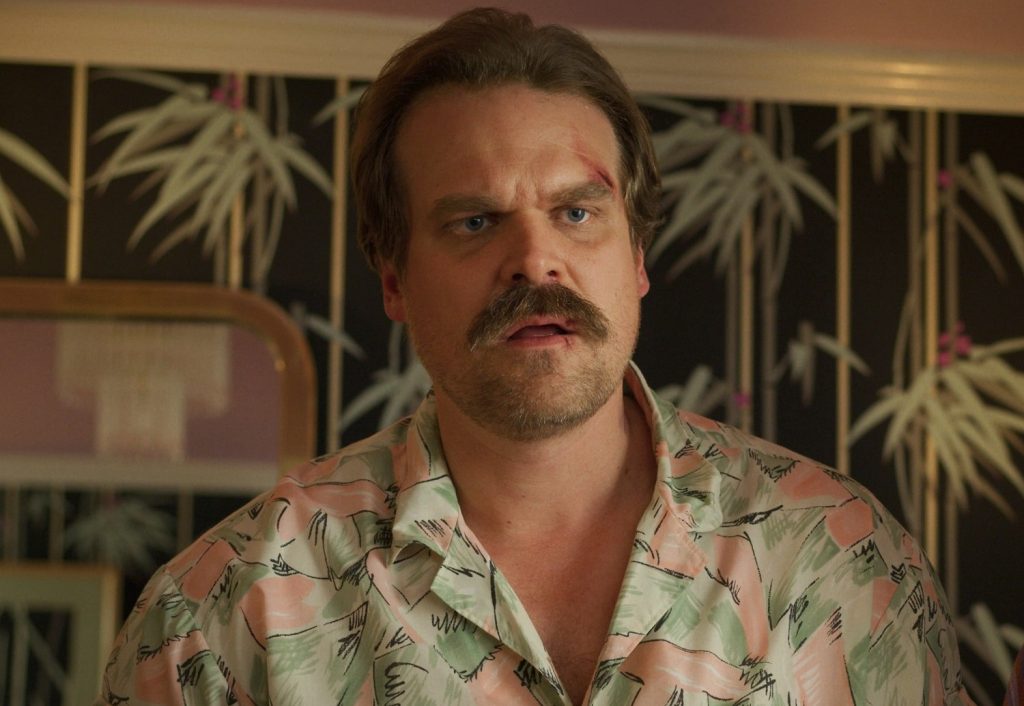 Stranger Things Season 3 brought a lot of surprises, and one of them was definitely the new style some characters adopted. Hopper, whether motivated by his daughter developing her own sense of fashion, by his blossoming romance with Joyce or simply by the summer vibes of the 80s, was among those characters. The grumpy cop joined the Hawaiian shirt club with a colourful green and pink piece.

The iconic top first appeared in the second episode when Hopper finally works up the courage to ask Joyce on a romantic dinner. He picks the shirt as his date outfit. When the date doesn’t happen and shit hits the fan after that. The cop ends up wearing the shirt until the end of the season. The print shirt became so popular among fans of the show that’s it’s actually available for purchase at Hot Topic.

Without saying a single word one of us could understand, Alexei won us over.

As Steve transitioned from bad boy to the ultimate mum friend, Billy took over the job as the villain of the show. Introduced as a regular character in season two, Max’s older brother slowly won his spot on the series. Going from a one-dimensional evil caricature, Billy became a fully formed character, with traumas, weaknesses and flaws.

In season three, he’s the main antagonist, and through lots of suffering and sorrow, Billy redeems himself in the end with a beautiful, tear-jerking gesture. The man who was originally so selfish and misunderstood gave his life to protect his sister and the very own kids he hated from the Mind Flayer. Born as a villain, Billy died a hero.

In the first episode of the new season, Dustin comes back from summer science camp. Apart from highlighting the fact that the boy is quite nerdy, the main takeaway from that is that he supposedly has got a girlfriend he met during the summer, Suzie.

Dustin even builds a make-shift radio to keep in touch with the girl who lives in a different state. After many unsuccessful attempts to talk to her (“Suzie, do you copy?), his friends start to suspiciously doubt her existence. But Suzie’s appearance in the last episode of the season saves not only Dustin’s world but our very own, which also leads to an incredibly silly but sweet duet between the two young lovers.

“There’s something I’ve been wanting to talk to you both about. I know this is a difficult conversation, but I care about you both very much. And I know that you care about each other very much, and that’s why it’s very important that we set these boundaries moving forward so we can build an environment where we all feel comfortable, trusted, and open to sharing our feelings. Feelings. Feelings. Jesus. The truth is, for so long I’d forgotten what those even were. I’ve been stuck in one place. In a cave, you might say. A deep, dark cave. And then I left some Eggos out in the woods and you came into my life. For the first time in a long time, I started to feel things again. I started to feel happy.

But lately, I guess I’ve been feeling distant from you. Like you’re pulling away from me or something. I miss playing board games every night, making triple decker Eggo extravaganzas at sunrise, watching Westerns together before we doze off. But I know you’re getting older, growing, changing. I guess, if I’m being really honest, I don’t want things to change. So I think maybe that’s why I came in here, to try and make stop that change. To turn back the clock. To make things go back to how they were. But I know that’s naïve. It’s just not how life works. It’s moving, always moving, whether you like it or not. And yeah, sometimes it’s painful. Sometimes it’s sad. And sometimes, it’s surprising. Happy So you know what?

Keep on growing, kid. Don’t let me stop you. Make mistakes, learn from ‘em. When life hurts you – because it will – remember the hurt. The hurt is good. It means you’re out of that cave. But, please, if you don’t mind, for the sake of your poor, old dad, keep the door open three inches.”

Maggie [2019]: 'NYAFF' Review- A Bizarre and Frustrating Ride about Trust and Belief