Prison escape dramas possess something more than entertainment value. We can discern the undying human spirit, a significant part of the human condition. The faith and determination to not concede defeat literally manifests in the very action to break out. Through an individual’s single-minded quest for freedom, we understand the meaning of diligence, hope, persistence, precision, and patience. And it’s always more than an escape story: it’s either a conscious reaction to injustice or the only way out of hellish surroundings that choose to psychologically smother a person rather than reform him/her.  Francis Annan’s taut apartheid-era thriller, Escape from Pretoria (2020) is one such prison escape drama, where the brute force attack of an inhuman regime is answered through a tenacious commitment to freedom.

Though Escape from Pretoria is too facile to occupy the top-tier of jailbreak thrillers (for e.g., the astoundingly precise Le Trou, Escape from Alcatraz, etc), it’s a compelling portrayal of the painstaking methodology of escape. Based on South African political prisoner Tim Jenkin’s real-life account of prison-break (chronicled in a book first published in 1987), it’s a film of nervy camera movements and panic sweats. The most distinct aspect of this particular escape narrative, compared to all other real or reel prison-breaks, is that these men involved simply unlocked prison doors to freedom (14 doors to be precise by making keys out of wood). 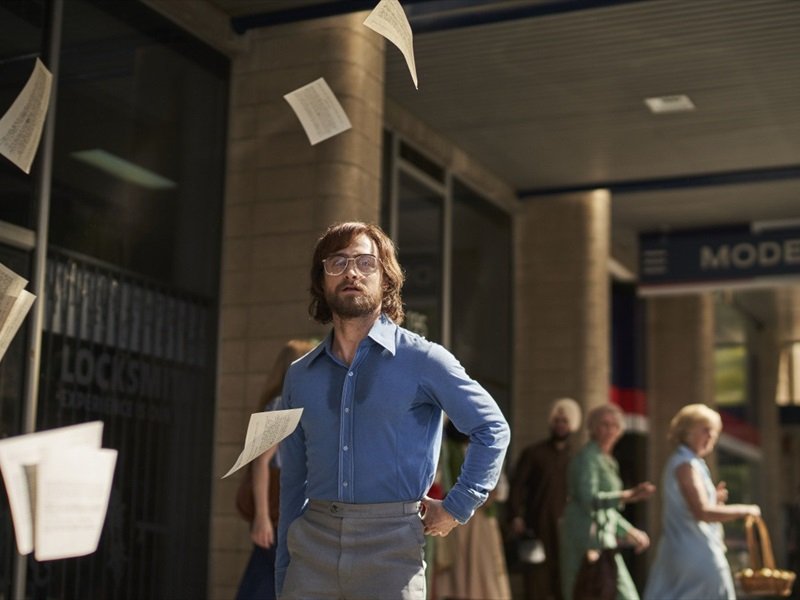 Daniel Radcliffe, sporting a thick beard and a shaggy mop of hair, plays Tim Jenkin who delivers one of his best performances post-Harry Potter. Escape from Pretoria opens with Tim Jenkin and his pal Stephen Lee (Daniel Webber) setting off bombs at a crowded shopping street. These bombs, however, aren’t intended to kill humans in order to make a point, but simply bursts out leaflets containing anti-apartheid literature. The two young white men, working on behalf of the African National Congress (ANC), are quickly rounded up and sent to trial. Jenkin and Lee receive twelve and eight-year jail sentence respectively. Director Annan and co-writer L.H. Adams don’t take much time to establish the two men’s lives on the outside. Jenkin is said to have worked in a university and his middle-class parents are devastated over the prison sentence. His black girlfriend (Ratidzo Mambo) covertly gives him money for later use.

Related to Escape from Pretoria: A Twelve-Year Night [2018] – A Heartbreaking Tale of Human Perseverance

Immediately upon entering the Pretoria prison (in 1978), known as ‘the white Robben Island’, Jenkin makes it his mission to break out of the allegedly impregnable prison facility. Francis Annan doesn’t focus much on Jenkin and Lee’s beliefs which pushed them to be activists for ANC. But they are touted to be symbols of resistance right from the opening frames. Webber’s character suffers more from the utter lack of character development.

Denis Goldberg (Ian Hart delivering a robust performance), a key and older member of the anti-apartheid movement, represents a counter viewpoint who believes in enduring the institutional brutality for the sake of future generations (a ‘prisoner of conscience’). The debate of which is the right way to resist apartheid isn’t profoundly examined as Annan’s pared-down style strictly commits itself to overcome the locked barriers.

The much-needed emotional dimension to the proceedings, however, doesn’t come from Jenkin or Goldberg, but from another high-strung, volatile inmate named Leonard Fontaine (Mark Leonard Winter; isn’t Fontaine is the name of the central character in Bresson’s masterpiece ‘A Man Escaped’?). Leonard is determined to reunite with his little son (whom he sees for only thirty minutes after a year) and approves the duo’s escape plan. The guards, as expected, are thinly characterized and remain as the simple personification of nasty, racist apartheid South African government. While Escape from Pretoria deals with the issues of segregation and injustice only in a didactic manner, craft becomes the center of attention when Annan maintains tension by going through series of problems, integral to the escape narrative, that’s spectacularly solved one at a time.

Jenkin uses his access to the workshop in an ingenious way by producing different sorts of wooden keys after getting the key dimensions from the locks itself . Maybe, the narrative nimbly summarizes each of the greater efforts from Jenkin to surmount a single obstacle into one scene. Yet the man who made the escape itself says that apart from the condensed depiction of the actions, all the details are so accurate; particularly that heart-stopping denouement when for an instant it seems the freedom is a distant dream in spite of opening 14 prison steel doors. The cinematographic technique may not be as inventive as the escape itself even though the tension and suspense does not let up for the majority of the running time.

Overall, Escape from Pretoria (106 minutes) though lacks depth happens to be an intriguing escapist brio driven by solid performances and slow-burn dramatic tension.