Belief in age-old traditions and absurdities is something that is quite dangerous and regressive. Furthermore, it is through this same method that this can be made to turn one against the other if they refuse or rather fail to see the light. Ashwin Gangaraju’s film, Aakashavaani (SonyLiv), presents a unique story that seems like a folktale but can be a relatable story in many different ways. For the docile, for the marginalized, and even for the ones who accept something just because it is. Of course, he doesn’t shy away from educating the audience with a glimpse of what happens to those who go against the status quo.

Set in Paderu in Visakhapatnam, Andhra Pradesh, Aakashavaani takes its name from the All India Radio, albeit the radio service is spelled in a different manner. This, along with the film’s release poster, will clearly lead you to believe that radio will be at the heart of Ashwin Gangaraju’s film. However, this will also be filled with an abundance of superstitious beliefs, blind faith and it borders on how members of the population can be like sheep if they don’t know something.

“The film doesn’t encourage or support superstitious beliefs.” This disclaimer right at the start of the film coupled with Sony LIV’s very (un)helpful need to play the trailer right before shows us a quite obvious thing. No film will want to support such beliefs, right? The film’s opening shot takes us on a journey from space right to the film’s location. i.e. a jungle settlement set in South India.

Right from the moment we see the villagers through Suresh Rugutu’s camera, it is clear that they are living in the absence of modern technological devices, basic amenities, or even knowledge of the general know-how of the workings of the world. They worship the trees, the ground, and a rock, believing that one day they will hear their deity. Later, they replace the rock…you get where I am going with this right based on the film’s title?

This belief plants the seeds for them to be influenced and permits an opening for them to rise against oppression. Aakashavaani (SonyLiv) sheds light on how a symbol is a prime need for an idea, and how all it takes is the destruction of an idea to calm the masses. That’s quite contrary to the Ideas are bulletproof from V for Vendetta. 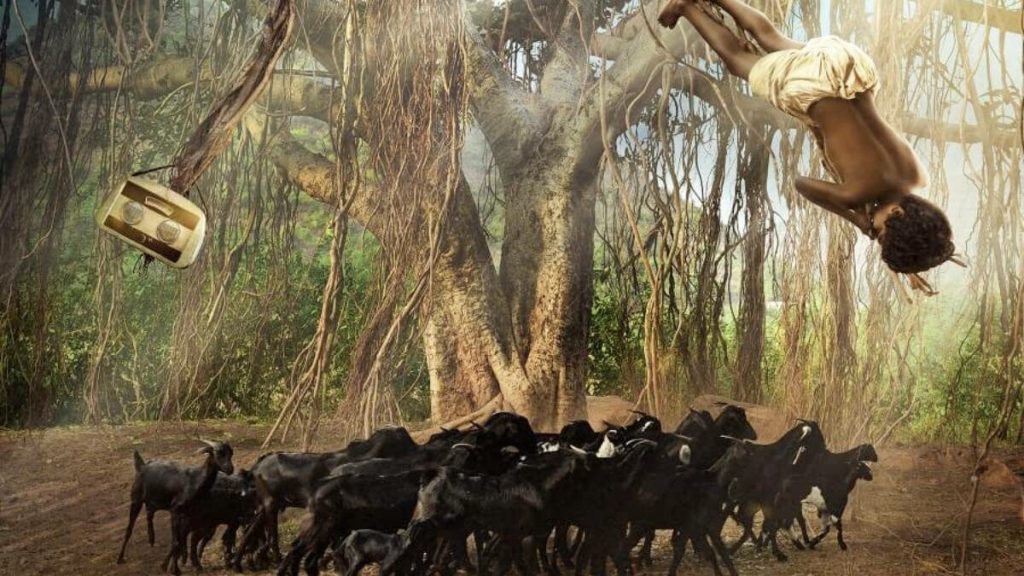 Like all deities, the one of this tribe also has a human form, or so they believe. This is the character called Dora. When looking back at the film, he seems to be the feudal lord of the place and uses the villagers as his serfs to live a lavish lifestyle. I use the terms, feudal lords and serfs, as one crime in the village is stepping outside the boundaries.

Dora is the primary antagonist, although the story direction doesn’t present too much of a conflict between him and the villagers. Vinay Verma excels in this role, as he is the brooding presence that can keep everyone in check. He squashes all oppressors from his path and at times even appears to be merciful, only to get his work done later. Even though he is merciful, the suppressed (ignorant) villagers play into his hands perfectly. This is primarily because of his head henchman, Samba, played by (Teja Kakumanu) who comes across as a thug who no one wants to cross.

Throughout Aakashavaani, Gangaraju lets the audience see how submissive and downtrodden the people are. Despite this, they say quite thoughtful things, such as, if man-built objects are worshipped, then why can’t they worship a man-made object that they have chosen to. The definition is correct here as they took the advice of a voice they desired to hear, and it helped them. Quite simple-minded folk indeed.

A good thing about Aakashavaani is that no character switches sides or has a conflict about which side they represent. Thus, they really get to be truly menacing, mean, or just simple and awed, thereby growing into their roles and helping the film progress.

Aakashavaani is something you may have never seen before. Its ending seems to follow the South Indian template ending only to shock you with a bolt from the blue. It’s quite absurd, yet fits in with the disclaimer, and the belief of the villagers. At the climax, one can also remember the famous saying – Actions speak louder than words.

Aakashavaani is now streaming on SonyLiv