Films with multiple stories always run the risk of becoming uneven if one of the stories starts to falter. In anthology format, there is still a scope of separate vision and separate execution. But a film, like Alanti Sitralu (Zee5), where multiple stories converge with each other, is judged on its entirety. A misstep in one segment could put a spanner in the works. That is why one could commend director C. Supreeth Krishna for choosing such a challenging project to base his debut feature on. Alas, that bravery is perhaps the only thing deserving of commendation here.

For Alanti Sitralu (Zee5) does not have one single story or segment undermining the whole film; it is the whole film that consists of half-baked plots and their ordinary execution on screen. The film has three primary stories, each with its own subplots. Some of these subplots act as converging points of the three stories. The idea was to present a seamless ride of drama with each character leaving enough marks on the mind of the audience. However, the rushed screenplay does not provide much scope for the audience to actually understand each character, let alone feel for them.

There is a boxer struggling with the stress of success and failures, a prostitute whom love eludes, a gangster trying to make it work for his daughter, and a 20 something guy with a guitar on his back. All of these characters are not so much introduced to us, as they were thrown in our faces. Supreeth Krishna relies on dialogues to convey necessary establishing information, and not on visual cues. Budgetary constraints might be one of the deciding factors in such a choice.

The problem with that is the dialogues are not really crisp and engaging. Most of the supposedly emotion-evoking dialogues would seem right out of templates. As a result, they come across more as stock social-media-influenced lines than as convincing and conversational. The lack of good conversation also dents the chemistry between the interweaving stories and characters.

Raag, the 20 something guitarist character seemingly becomes enamored with Pallavi, the prostitute, in a Metro Rail ride. The love or friendship between them starts quite abruptly and absurdly, to be honest, involving a bit of stalking. Even if we ignore the absurdity for a moment and give this Pretty Woman-Esque storyline a chance, it falls flat as the chemistry between Raag and Pallavi hardly gets established. The moments they share seem forced and unnatural, instead of being romantic and beautiful as intended. 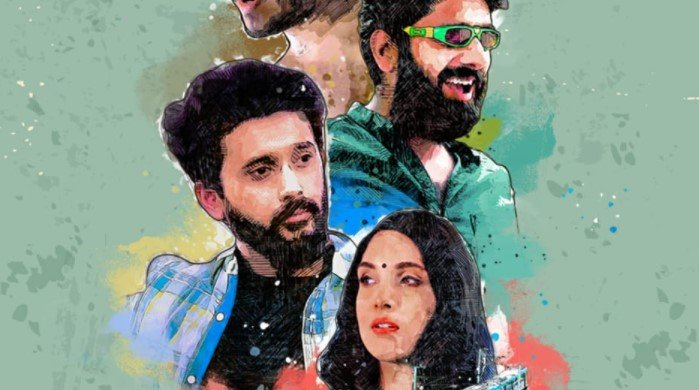 Pallavi is the converging point of stories centered on Raag and Dilip, the gangster with a daughter to care for. Her relationship with Dilip is better established than that of Raag. However, Dilip is perhaps the most incoherently written character in the entire collage of stories. His perpetually weirdly wrong decisions border on ludicrousness. As a result, we hardly ever care for him throughout the movie.

Yash is the boxer character who has a subplot of his own, where his relationship with his girlfriend is explored. His story also gradually converges with Raag’s and Dilip’s. This story also suffers; this time from a drab of a conflict between Yash’s aspirations and love life. The silver lining in the writing of this film is the pretty well-thought converging of the three stories. The junctions where the three stories intertwine are well chosen.

But the biggest pitfall for the film was the performances of its cast. Barring Tanvi Akaanksha, who played Yash’s girlfriend Yamini, none of the lead or semi-lead actors really could churn out a noteworthy performance. Ajay Kathurvar seems to really struggle with his portrayal of the volatile Yash. Coupled with already mentioned generic dialogues, the unconvincing delivery of those lines really makes the whole experience quite flat.

The same could also be said about the number of action sequences the film had. Barring Dilip’s introductory fight scenes, none of the fight sequences have the ferocity or the genuineness. Even Dilip’s introductory fight scene, a well-constructed one-take shot, had some moments where the hand-to-hand combat reeks of fakery. I mean, we all know the fights are fake in nature in a film, but if it becomes obvious while watching the film, it poses a problem. Yash’s boxing sequences massively suffer from this as well.

The decent cinematography and songs could not really salvage Alanti Sitralu (Zee5). Overall, Supreeth Krishna aimed high with the topic he chose, however, his safe execution does not really scratch the surface. Perhaps he should have chosen a ‘safer’ and simpler story and tried to bring some flair in direction and screenplay.