Home»Reviews»Euphoria (Season 1) Review: A trippy critique of our relentless and impulsive present
Reviews

HBO’s 8 episode series ‘Euphoria,’ which aired Season 1 not long after its final (not so well received) season of Game of Thrones, appears on its outset as a disturbing high school narrative interested in shock value and bold statements; except it isn’t. What Euphoria does through its brilliant cinematography, its typical first world high school stereotypes and several trigger warnings is to pull us into a world of our own making. The first voiceover we hear in the opening sequence of the series is that of Rue Bennett’s (Zendaya), a girl who was born just three days after 9/11 in a country which suffered one of its greatest setbacks since the great wars, surrounded by televisions that constantly televised the horrific consequences of the attacks. Within the first two minutes of the narrative we learn of Rue’s Obsessive Compulsive Disorder, her anxiety disorder and her ‘possible’ Bipolar Disorder which her mother explains to her as the way her brain has been ‘hard-wired’ and normalizes it as a phenomenon that many creative people suffer from like Vincent Van Gogh and Sylvia Plath and within the age of 12 we hear Rue summing up her existence and declaring at the dinner table “I am fucking exhausted.”

In the events that follow we learn that our 17- year old protagonist has been to rehab for overdosing from drug abuse. We soon find out that she has been released but is not entirely done with her drugs. In fact, she has based her existence around it.  She even justifies her habit interestingly through their hopeless future in relation to climate change. Soon we are introduced to our gallery of high school stereotypes through a classic parents-out-of-town end of summer party and we are immediately thrust not only into the glamour that surrounds Gen Z but also the horrors of it.

“I think the important thing to acknowledge is the show is about teenagers and not necessary for teenagers, which I think people can misinterpret,”
– Zendaya (Rue Bennett)

How Euphoria Season 1 Deals with Mental Health and Parenting:

Let’s start from the start! Euphoria presents us with a montage of mental health issues and the beginning of every episode. Much like the explicit diagnosis of Rue’s fragile mental condition – which immediately makes us aware of her unstable position to provide a reliable narrative, with every introduction we not only learn of each characters mental instability but also how these “issues” are intrinsically linked with their identity. These can mostly be traced back to absent/poor/possessive/lenient/over imposing parenting.

By the end of the first episode, we get a clear picture of the horror and complexity that shrouds this suburban universe with the camera moving in to focus on Nate Jacobs’ uber-masculine jock character. He is the high school stud whose toxic masculinity had been up for show not minutes ago. His family portrait reveals his father, Cal Jacobs, who happened to be the partner of Jules’, the new cool kid in town, sexual exploration. The very next episode picks up Rue’s narrative on Nate’s life which provides an unnerving collage of all the crucial points that has led to the formation of Nate’s present identity/toxicity. His father, Cal, whose idea of parenting involves elaborate lectures on strength to his 11-year-old son is also a man who indulges in sexual liaisons on the side under the name ‘DominantDaddy.’ Picking people from dating apps he fulfills his innate narcissistic urges and goes as far as filming his experience to keep as souvenirs from his adventures in color-coded cases. A cipher that has been already, unbeknownst to him,  decrypted by his equally obsessive son.

As handsome as Nate Jacobs is, the first time we physically see him, he is involved in giving McKay obscene advice on his sex life with Cassie and catcalling Jules throwing her off her bike. We soon see his troubled relationship with Maddy, his ultra-feminine girlfriend who checks off all that he imagines ideal in a girl (no body hair, slender shoulders, and long-neckline blah blah) and we hear from Rue’s narrative about his phobia of a casual display of the not-so-attractive phallus which can easily be paralleled to the Freudian fear of castration. As the season rolls, we notice every sign of toxic masculinity in him starting from his obsessive urge to protect his girlfriend to assaulting her the very next minute to manipulating and even physically wounding a person to take the fall for his assault.

Moving on to the ever so enigmatic Jules who playfully engages in sexual relations with older men and moves about in bold glittery eye makeup and pink hair is all but a girl who is in a quest for conquering her femininity and reconciling with her sexuality. She, as a child, had been admitted to a correctional facility by her mother for being too depressed. Her easy resort to violence in trying to stop an overtly heated argument with Nate justifying it as a move of self-defense is embedded in her previous attempts of self-harm which we later see in the flashback.

The other characters too, like Maddy, Cassie, and McKay, all present a variety in cases of societal pressures and problematic parenting. The relationship between Maddy’s terminally ill (absent) father and her hardworking mother gives her the idea that a toxic relationship full of abuse, possessiveness, and manipulation makes more sense than her father’s non-presence in her parents’ relationship. Cassie’s dysfunctional family with her alcoholic mother battling ‘issues’ and her drug addict father leads her to look for companionship everywhere. Even if it only means sex and filming sex tapes and McKay’s over imposing father pushes him further off the edge. Even Rue’s condition is partly a residue of her issues at home- her inability to cope with the loss of her father and her mother’s struggle in finding the right balance in single parenthood.

While most teen dramas are centered around the motif of coming to terms with one’s sexuality, Euphoria marvels with its treatment, making Maddy rightly refer to sexuality as a spectrum. It intelligently uses its explicit content to not to stereotype but to subvert the stereotypes surrounding body image and sexuality. Starting from Jules’ transgender identity which is not mentioned until quite into the season to Kat’s embracing her body-type as a symbol of power and not the regular “fat-friend” image are indicators of more inclusivity.

What Euphoria does, however, is merely play with these inclusive ideas to provide a more horrifying picture. Even though there is no stereotype surrounding their identity or image, there is a reckless lack of awareness in their respective experimentation. On the one hand, we have Jules’ wild blind dates through dating apps which leads her to the incident with Cal. On the other, we have Kat’s obsessive desire to lose her virginity which subsequently leads to the leak of her sex tape. This finally culminates to her idea to involve herself in anonymous pornography on the internet to earn money.

Even after the incident with Cal, Jules willingly participates in flirting with ‘Tyler’ with whom she almost falls in love and does not even hesitate in meeting him at a desolate spot because she believes her gendered identity does not make it simple for her to meet at a cafe albeit never having seen his face and having only shared nudes. This experiment entangles her further with the Jacobs’ when Tyler turns out to be Nate who threatens her with charges of child pornography if she ever desires to expose his father. 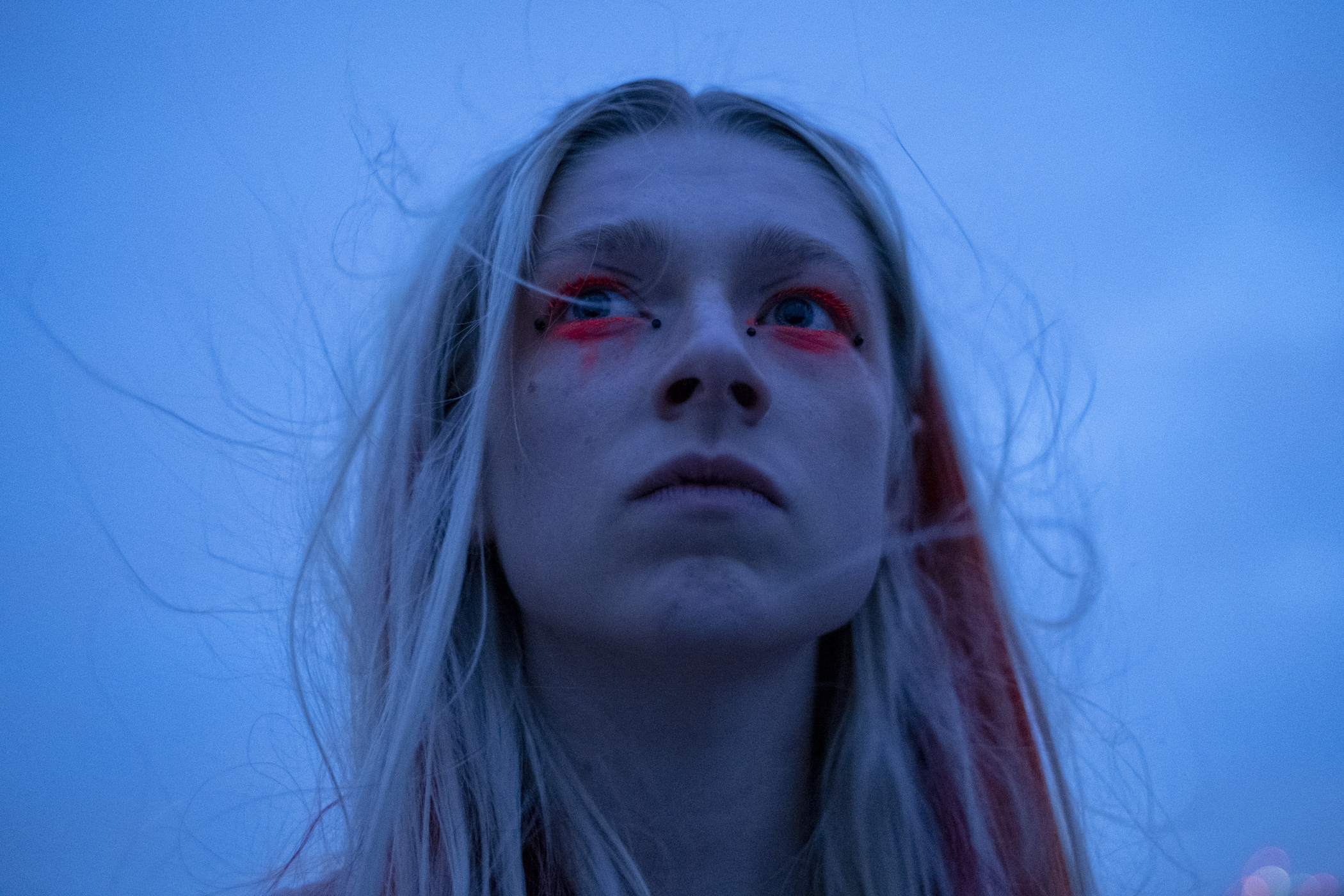 Her experimentation, however, does not end there. Even though she detaches herself from Jacobs’, her relationship with Rue does not ensure the fulfillment she is looking for. She is even surprised at Rue’s almost sex-negative status who is merely a child looking to be truly loved and kissed in symmetry, while Jules is on an adventure to obliterate femininity. She openly rejects monogamy declaring her love for both Rue and Anna and impulsively even boards the train to the city leaving Rue behind who refuses to go.

Euphoria even addresses repressed sexualities through Nate’s plausible closet identity. One that he is unable to come to terms with simply for the gender stereotypes surrounding masculinity and homosexuality. But it is sufficiently hinted at, through the ease of his conversations with Jules in the guise of Tyler. This is in contraction to his father’s indoctrination on being a ‘man’ and McKay’s dominant sexuality which is sparked after the incident of his abuse by his seniors.

What lies beneath the psychedelic hues and intoxicating soundtrack of Euphoria is a rotting world that has been left behind by us. This is a 21st-century world of the to be Millenials – nuclear bombs and social media, a world of peer pressure and mental illnesses, a world of unemployment and climate change. What Euphoria provides us in the form of teen experiences is not for their viewing but for parental understanding, for reflection, for introspection. What we leave behind in this world today shall have no life anyway. Like the beginning of Rue’s life after 9/11, Euphoria Season 1 closes with Rue going back to drugs, i.e the only comfort she knows. She makes her choice, her choice is to bear the weight of this world in a trance and we know it is irresponsible, but are we, the last of the sickening, tiresome, vengeful folks from the 20th century, any less irresponsible?

Euphoria will return for Season 2. The airing dates are yet to be declared.
Euphoria Season 1 Episode List