Everything Is Cinema (2021) has a deceptively simple plot. Chris is a young filmmaker who set out to film Calcutta with a camera in hand and his wife Anita, who is an actress, by her side. The urge to film the city of joy came because he was fascinated with Calcutta, Louis Malle’s 1969 documentary episode which immaculately filmed the city with a transparent insight. This documentary, he implies, would be experimental because while it’s not a foreigner’s eye view of the city, it certainly is not an intimate one, given his far from North Indian roots and his inability to speak in Bengali or even Hindi.

And then, almost obviously, the Coronavirus pandemic clasps the world and chains it with its infection. The entire city locks down in March, which forces him to stay at home with his wife. So instead of looking at the outside world, he is compelled to look at the world inside, filming his actress wife in solitude and secrecy and funnily enough, whining about how bad and generic of a person she is.

Don Palathara is an interesting filmmaker. He captures, and more importantly, observes the world like few indie talents in Indian cinema do. Darkness envelops his films’ world, yet the world itself hustles and bustles with contained energy and vibrancy. His pre-pandemic black-and-white film 1956, Central Travancore was elegiac in its depiction of history. However, it had the soul of a mythological fable about two brothers and their endeavours. The one-take post-pandemic world filmmaking of Joyful Mystery was even more satisfying and powerful. In the film, a dysfunctional quarrel transformed into a poetic romantic comedy in almost no time.

SIMILAR TO EVERYTHING IS CINEMA: JOYFUL MYSTERY [2021]: ‘IFFK’ REVIEW – A MOVING ROMANTIC COMEDY ABOUT THE CULTURE OF QUARRELS

In spirit, Everything is Cinema would certainly look more alike to the latter. It’s a very vague comedy about a couple’s scarily natural tensions which are lacking any chemistry. There’s not even a speck of sympathy in Chris when he pretentiously goes about joking about Anita’s beliefs and her hypocrisy in a frantic voiceover. What further doesn’t seem to help is the fact that he haughtily shifts between monochrome and colour mediums for filming. But as the film advances and streams down to a sentimental climax, you become used to the superficial quality of it all. 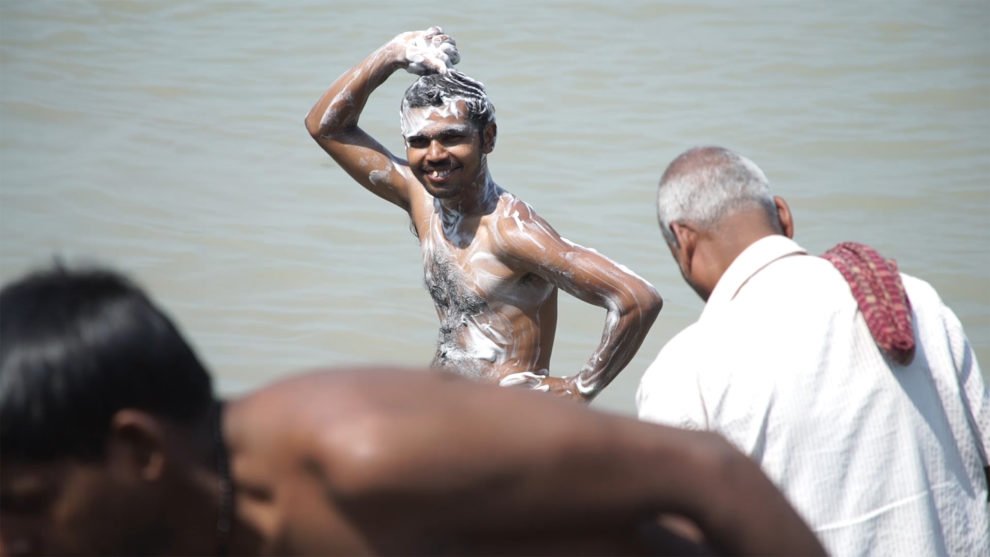 The film, funnily enough, works because you see what the director is trying to do here. This, if you read a bit into the context. The first thing to admire here is Calcutta’s rhythmical and meditative depiction as a city. Not the vast metropolitan economy, but a city. There are familiar photographs of the Howrah Bridge and Victoria Memorial. But ultimately, given that Chris’s home is in the busier outskirts of Alipore, the limited and almost disorganized scope of his camera observes Calcutta and not the more contemporary Kolkata. He prefers to depict it as an ambiguous small-town with pictures of an acute absence of riches and privilege.

However, Calcutta of Everything is Cinema is pure and saturated with the typical colours of daily life. Their presence filled my heart with joy perhaps because it’s the city of my residence.

However, the Coronavirus requires the director to stay at home. And when he focuses the creative energy on verbally abusing the woman he resides with, albeit quietly, makes us believe that a City of Joy for some people can turn into an allegory for disappointment and regular desolation for others. As much as I relished the funny ways in which Chris described Anita, I was also feeling for Anita herself, who is an elegant actress stuck with an inconsiderate and ignorant asshole who contains such bitterness and contempt for her.

And then, the context comes into play. Everything is Cinema after all! Chris is not a real person. The director, who himself never appears before the camera, lends his voice to the character. (This, however, is not a first, this overbearing voice had its cameo in Joyful Mystery as well). Obviously then, Anita isn’t the real wife too. She is excellently played by the film’s co-writer Sherin Catherine (Who memorably played a theatre actress in Palathara’s 1956, CT). The deceiving nature of the film works as a takedown of the early short-stemmed French romantic pieces. The directorial style, though not precisely so, is spurred by the skill of Louis Malle’s work, most importantly his Phantom episode Calcutta (1969).

Everything is Cinema also shoulders the burden of erratic writing. Some of the flourishes are indulgent and one might mistake a few heavily superficial moments for the nuanced ones. The course of strain in the nuptial relationship of Chris and Anita could have been done without straight-up pessimism. Also, I found myself craving for more likeable moments between the two (an actual sex scene perhaps! But hey, that would be too exploitative and it would have taken so much from the actual setup).

But ultimately, it doesn’t require itself to push forward and explain its title. It’s a well-executed and charming docufiction which is almost as obscure and beguiling as the director’s taste of films. I needed only one film to confirm myself as a fan of Don Palathara. And with Everything is Cinema, a film that one needs to see only after seeing a couple of the director’s previous works, I think I have become one.

EVERYTHING IS CINEMA WILL PLAY ON MUBI AS A PART OF THE DON PALATHARA SPOTLIGHT ON AUGUST 20.

Everything is Cinema Links – IMDb, MUBI