Experimenter [2015]: An Unconventional and Refreshing Biopic

Life can only be understood backwards, but it must be lived forwards
Soren Kierkegaard

Isn’t the word biopic brings to our mind certain elements? An actor imparting an Oscar worthy (or is it called ‘award-bait’?) performance? a characteristic prologue, flashbacks, and epilogue that makes us go ‘wow’? Splendidly filmed & edited sentimental montages? Only few filmmakers transcend all these conventional elements of a biopic, like what Spielberg did in “Lincoln” or Spike Lee in “Malcolm X”. While, few other film-makers totally deviate from the ‘biopic’ rules and remain uninterested in setting off the audience’s emotional fireworks. They are more interested in their subject’s ideas or thought process rather than probe deep into their psychology or else vividly explain the subject’s emotional baggage. Such quasi-biopics motivate us to know more about a certain personality, unlike the conventional biopic, which advertises its version as an account of verity. Michael Almereyda’s “Experimenter” (2015) takes one such unconventional approach to showcase the works of controversial social psychologist Stanley Milgram.

In fact, 2015 was a year for unconventional biopics. James Ponsoldt’s “The End of the Tour” (about novelist David Foster Wallace), Danny Boyle’s “Steve Jobs” and Don Cheadle’s “Miles Ahead” (about jazz legend Miles Davis) were all the bunch of films that chucked the standard Hollywood biopic format. Although the film “Experimenter” refers to Dr. Milgram, director Almereyda is also an experimenter. He tries to blend in the intellectual seriousness of a docu-drama with the playfulness of the theatrical drama. So, the deliberately subdued aesthetic approach along with fourth-wall breaking monologues may irk & confuse many viewers. But, once when you are invested Experimenter offers a lot of thought-provoking questions, whose impacts are only felt in hindsight. 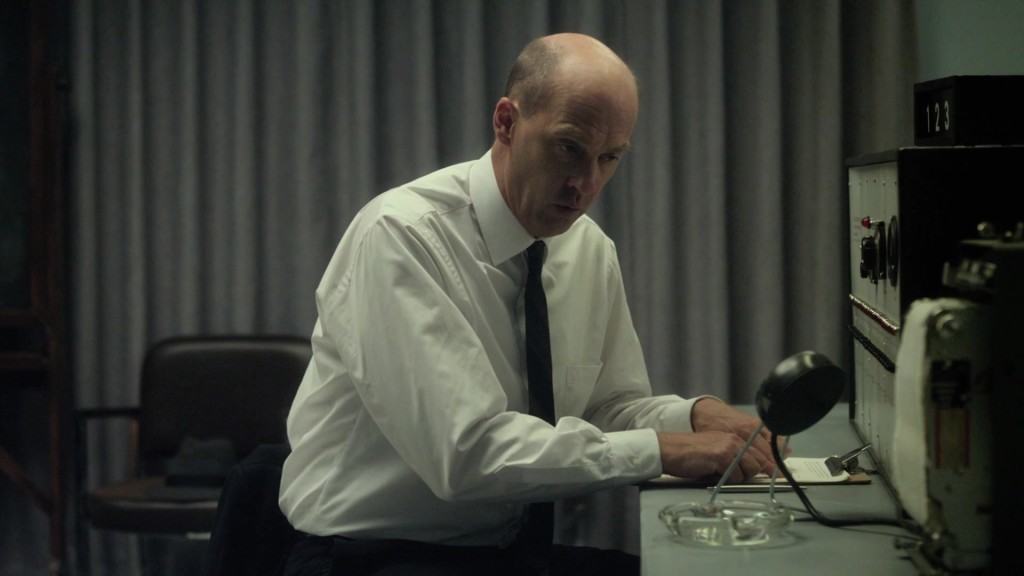 The movie opens with Milgram’s famous ‘Obedience’ aka ‘shock’ experiments, conducted at Yale University, in 1961. Dr. Milgram calmly sits and gazes over the one-way mirror as a doctor in gray lab coat assigns the role of ‘teacher’ and ‘learner’ to two experiment participants (come out of their own free will). The ‘teacher’ is instructed to ask a series of questions to the learner, in the next room. For every wrong answer the ‘teacher’ has to administer an increasing voltage of intense shocks. However, the ‘learner’ is an actor, who simply plays sounds of pain and crying from a tape, in the other room. The ‘teacher’, who is the subject of observation, gradually becomes unhinged as they are politely asked by the conductor of experiments to keep on giving shocks (the maximum labeled as 450 volts). The ‘teacher’ sighs, tremble and even hesitate a little, when hearing the (fake) agonies of other participant, but in the end persuaded to give shocks, just because an alleged authority figure tells them to do so.

The experiment shocked psychologists since defiance from the ‘teacher’ participants became an anomaly rather than a convention. Most of the participants are easily swayed to ‘just following orders’ mode (Milgram calls it as ‘agentic mode’). After establishing this opening experiment, Peter Sarsgaard’s emotionally elusive Dr. Milgram talks to viewers (the first of many fourth-wall breaking monologues) providing insights about human response to authority. The narrative also touches on Milgram’s other famous experiments on ‘group conformity’, ‘six degrees of separation’, etc. And, the proceedings always pose questions on Milgram’s ethics and the relevance of his findings. Is he a sadist? A heroic figure? Or else an ordinary guy with simple objectives, hope and fear? There is no answer for those questions, since comprising Milgram within such common attributes would be ignoring the complexity of his personality. 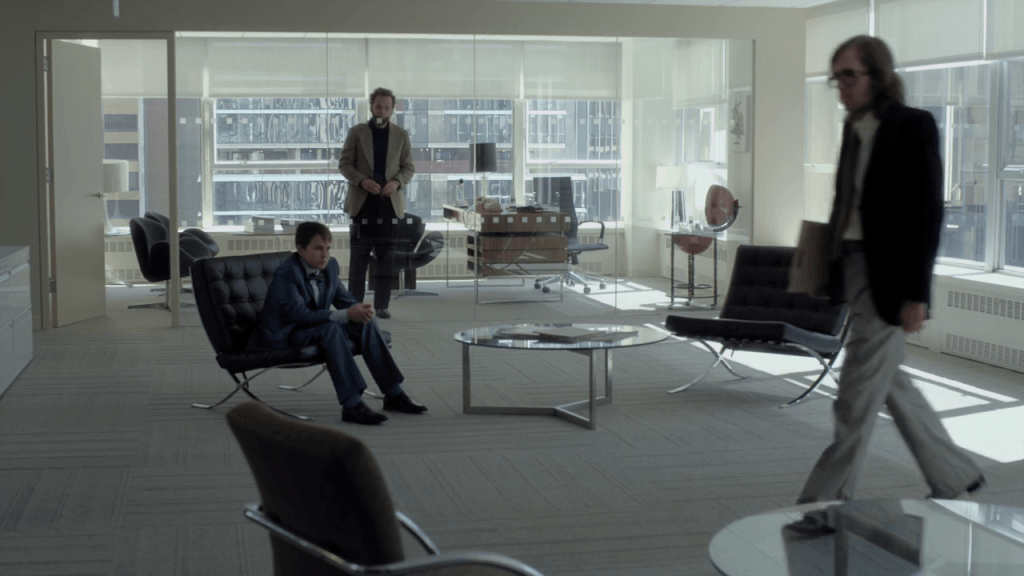 Peter Sarsgaard’s emotionally dry performance as Milgram is one of the best things about the film. He perfectly depicts a person who has locked emotions within his mind. Experimenter is drenched in on-the-nose as well as subtle symbolism and metaphor. Earlier in the movie, when Milgram explains about his familial background, stating that he was a son of two immigrants who escaped the Holocaust, an elephant literally walks behind him, which playfully brings home the point that the doctor’s background is the reason for his fascination with ‘obedience’ experiments. Director Almereyda uses two-dimensional backdrops and sets in many scenes to Milgram’s alienation as well as to highlight how the doctor’s life itself moves like an academic experiment. At times, Almereyda deliberately uses non-theatrical settings to depict how other non-academic people have shut themselves with their own obsessions and objectives. (For example, consider the ‘glass building’ scene, where random people in each adjacent glass room don’t acknowledge the other person).

Almereyda also addresses the central irony of his subject, where Milgram himself embodies few of the characteristics he founds or despises on experiment participants (think of the scene where he orders his kids to sit in the diner, or the scene when Milgram converses with a man dressed like ‘Lincoln’). Milgram, in those sequences, are subtly portrayed as a man blinded by his pursuit (or obsession). At the same, the director also relishes in clearing up how Milgram was misunderstood by his experiments. There was fire in the scene, when Milgram talks with esteemed psychologists, revealing how he was ignored simply because the experiment’s results are unnerving. In the final monologue, the writer/director points out on how Milgram’s obedience experiment keeps on re-entering into field of psychology, and at this point, the aforementioned Kierkegaard quote (“Life can only be understood backwards, but it must be lived forwards”) becomes more relevant: in understanding the revelations of Milgram’s experiments of the past and to use this revelations to build a clear-sighted future (where Abu Gharib’s & My Lai’s are shunned). And, as the sun shines in the film’s final frames, we can’t stop feeling (despite all the dark observations) that there is still hope left for humanity.

“Experimenter” (98 minutes) is an engrossing docu-drama that brings out few unsavory, but vital truths about human nature. It offers a nuanced warning to not become the person, whom we fear or despise. As Stanley Milgram says “Our awareness is the first step in our liberation”.

Experimenter [2015]: An Unconventional and Refreshing Biopic