While making the viewers spellbound with his previous films, Damien Chazelle has always been keen on the music from his films. Be it Whiplash or La La Land or even his debut feature- Guy and Madeline on a Park Bench, his films have dominantly been about music. Even his previous venture- First Man was graced with the music by his frequent collaborator- Justin Hurwitz. So,  The Eddy Teaser Trailer is enough to make any of his admirers to shout out on the rooftops.

‘The Eddy’ is an eight-episode miniseries that brings Chazelle back in his comfort of Musical Drama. The Netflix series is set in modern-day Paris. The narrative revolves around the lives of those who are related to the world of music in one or the other. It stars Moonlight-fame Andre Holland apart from Cold War-fame Joanna Kulig. Apart from both of them, the series also stars Amandla Stenberg, Tahar Rahim (known for A Prophet), Leïla Bekhti in prominent roles. 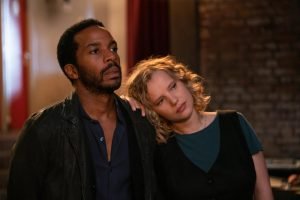 Chazelle took the direction in his hands with Jack Thorne – a 5-time BAFTA-winning writer. The music is composed by Glen Ballard (a 6-time Grammy Award winner) and Randy Kerber. From the looks of it, the series clearly feels like the next step for Damien’s rich filmography. Within a minute of continuous take, The Eddy Teaser Trailer shows his expertise in establishing the milieu with all the atmospheric elements that he can bring. The maddeningly hypnotic music just gives a peak towards the end. But it is surely enough to get excited about this new project.

‘The Eddy’ will release on Netflix on May 8.

Pokemon: Mewtwo Strikes Back - Evolution [2020] Netflix Review: Pales in comparison to the original

How "Thappad" Champions An Inclusive Screenplay of Empowerment, Exploration, and Realizations