Single-location movies have a practical purpose, to execute a story without worrying much about budgetary constraints. And as the proclivities of humanity have shown, the more the limitation, the more the abundance of creativity. However, the lack of acknowledgment of the fundamental flaw in the premise sometimes stops a movie from becoming great. Notwithstanding, sometimes, a movie’s sole purpose is to entertain, either by eliciting a palpable sense of horror or a nail-biting sense of tension. Scott Mann’s latest film, “Fall (2022),” falls more on the latter side of the category.

It is easy to lampoon “Fall” as “47 Meters Up”, as it is being bankrolled by the producers of “47 Meters Down”, itself a cult classic and a fantastic companion as a double feature. Both of these films follow two close female friends who must work together to get out of an unsolvable jam when the extreme sporting event they are a part of inevitably goes wrong. While “47 meters down” finds these women submerged in a cage in shark-infested waters, “Fall” finds them stuck 2000 feet up on top of a radio tower. But we are getting too ahead of ourselves.

The movie opens with best friends Becky (Grace Caroline Currey) and Hunter (Virginia Gardner), with Becky’s husband, Sam, rock climbing. While manipulating a particularly tricky opening, Dan is startled by a bat flying out of the crevice he was holding on to, disturbing him and losing his foothold. As Dan hangs in the air, his body connected to his harness, he tries to swing back but falls to his death. Fifty-three weeks later (one year for those counting), Becky’s life is a mess.

Swallowed in grief, resigned to alcohol, and distanced herself from her father (Jeffrey Dean Morgan) because her father did not trust Dan to be good enough for her, she tried to commit suicide until Hunter visited her. Hunter tries to console her and suggests that Becky accompany her in climbing a 2000-foot TV tower situated in the desert. It would serve a dual purpose of both spreading Dan’s ashes once they climb to the top and providing a cathartic experience for Becky to gain closure on her loss and fear.

Hunter, the adrenaline junkie, has now become an Instagram influencer. The climbing of the tower is the latest in a long line of crazy stunts she executes to attract fame and satiate the adrenaline junkie within her. As they drive towards the tower, they stop at a restaurant for dinner, where Hunter teaches her to charge her phone by connecting her charger to the leads of the lamp and using that as a power outlet. The girls drive towards the tower the next day but cannot pass the gate. Thus, they start walking toward the tower, where they come across a half-dead coyote being picked on by a pack of vultures.

As they shoo the vultures away, Hunter shoots a picture of the dead coyote. The girls soon reach the foot of the tower, where they start climbing the internal ladder. Becky almost backs out due to nerves, but Hunter convinces her to keep going. There are shots signifying how rickety the entire structure of the tower is and how the screws connecting the ladders and holding them upright are precariously close to unscrewing themselves due to the pressure being exerted on the steps. 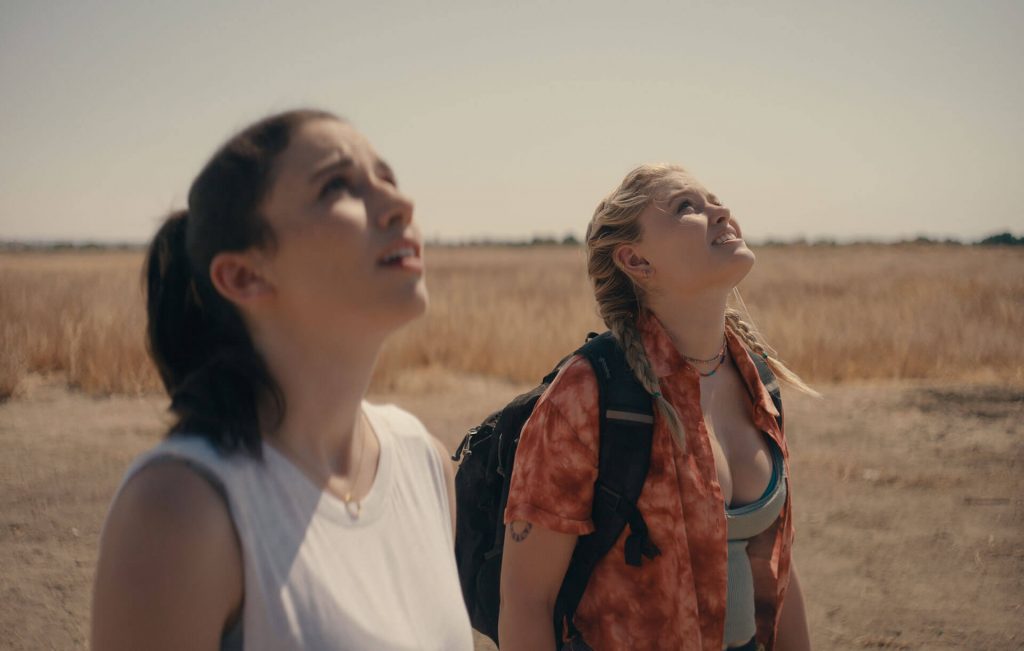 The girls reach the end of the internal ladder, which leads to a platform. From there, they must climb another 200 feet until they reach the top of the tower. As Becky and Hunter climb up the ladder, unbeknownst to them, one of the bolts comes loose. The girls finally make it to the top of the tower, where they manage to spread Dan’s ashes. An emotional moment that hit both Becky and Hunter hard. They also take pictures of them hanging in precarious positions with the help of Hunter’s 4K camera drone.

Finally, they decide to start climbing back down, but as Becky starts to climb, the unscrewed part of the ladder comes loose, causing the entire ladder to topple and fall to the ground. It also causes Becky to drop the bag containing their drone and water bottle on top of one of the satellite dishes attached below. Hunter manages to pull Becky up using the harness. It presumably causes a large gash on her knee, which Hunter helps her to stop bleeding by making a tourniquet. They also found a flare gun and binoculars in the compartment at the base of the tower.

Stuck at the top of the tower, Becky and Hunter cannot find a signal, thus rendering their smartphones effectively useless. After waiting for five hours and realizing that no one had heard the ladder crash and no one was coming to help them, the two tried to search for help via their binoculars and saw a trailer parked up near the gate. They planned to lower the phone a couple of feet so that the phone could regain signal, which would send an already prewritten message via Hunter’s Instagram.

They finally decide to drop the phone by putting it in one of Hunter’s shoes and reinforcing the shoe by padding it with Hunter’s sports bra-the logic being that the phone would regain the signal while falling and send the signal. However, the phone breaks, and even a dog belonging to one of the trailer park men sniff the shoe and finds the phone but doesn’t look up at the tower. The girls finally wait until dark before launching the flare from the flare gun and attracting their attention. Unfortunately, instead of driving the trailer to help them drive up to the gate, the men stole the car they had parked there.

Becky and Hunter start getting hungry and dehydrated. As charged emotions flare up, Becky watches a video of her and Dan’s wedding and notices Hunter’s gloomy face in the video. With the tattoo emblazoned on Hunter’s ankle (“1 4 3”), this compound forces Becky to confront Hunter by revealing to her that Dan had trouble proclaiming he loved her, choosing to say those three numbers instead. Hunter admits to having had an affair with Dan for four months, initiated by Dan after a drunken encounter. It forced Hunter to distance herself from Becky after Dan’s death because she had broken off the affair with Dan as she valued her friendship with Becky far more.

The following day, having ruefully acknowledged that the phone is broken and no one is coming, Hunter decides to climb down to the satellite dish and try to retrieve the bag containing the water and the drone. Using the harness, she lowers herself to the top of the satellite dish and manages to jump to the other dish and retrieve the bag. Hunter uses the selfie stick to reach the harness and manages to reach up. As she starts climbing up, Becky pulling her from the top, she appears to slip and fall to the dish. Becky, terrified, manages to peek down and sees her still alive, albeit her hands are profusely injured. But Becky manages to pull her up.

Becky then tries to deliver a piece of paper using the drone to the motel where they had stayed the night before, but the battery starts running out, which forces them to retrieve the drone. Remembering Hunter’s trick of charging the phone via the lamp leads, Becky climbs up to the port where the tower’s night light is attached. Her wounded leg is already starting to smell, but she manages to climb up the pole with considerable effort, unscrew the light, and connect the drone’s charger with the leads and her marriage ring as a conduit. As the drone charges slowly, Becky holds on for dear life throughout the night, barely dodging the vultures smelling blood from her wounded leg.

Finally, after the drone is charged, the girls attach the piece of paper to the drone and fly it over the gate towards the motel. But, as fate would have it, and as a callback to a previous scene in the first act, a truck crashes into the drone and destroys it, shattering her hopes of ever sending a message. Becky soon starts to lose herself from delirium and dehydration, almost falling from the platform. She finally asks Hunter for her other shoe, so she can drop her phone and ask for help. But Hunter coolly replies that she doesn’t have the shoes because she isn’t here in the first place. 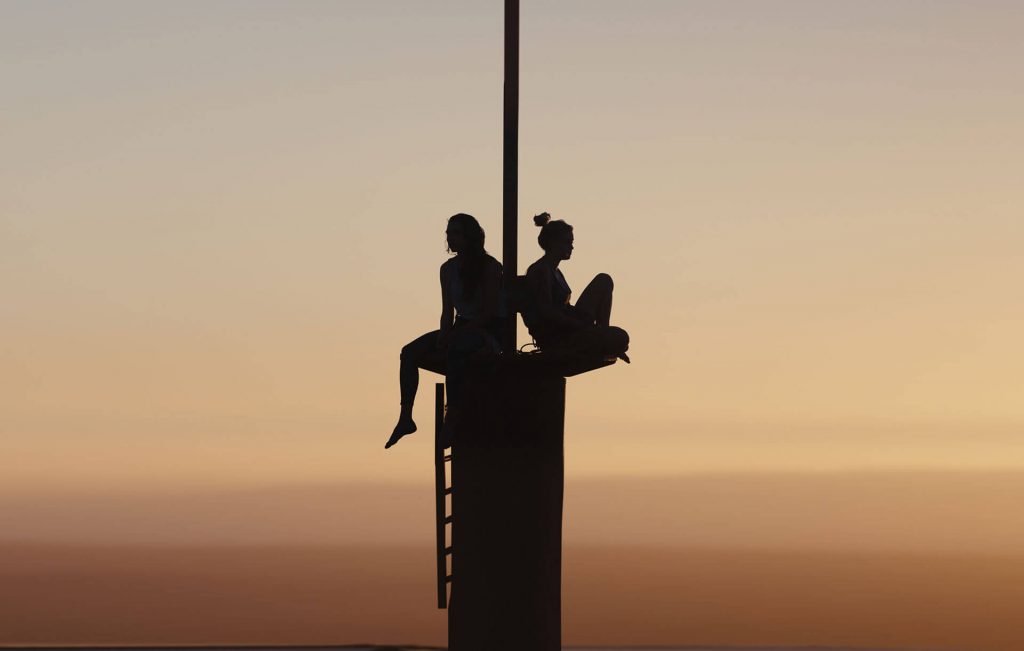 It is then revealed that she died when Hunter slipped and fell into the dish. Becky had only managed to pull up the bag. The “Hunter” who had been helping Becky throughout the rest of the events up to this point had been a figment of her imagination. It does make sense, as the “Hunter” who had been at Becky’s side after climbing back up to the platform had been more cautious, trying to provide Becky with moral support by talking about wrestling—a hobby which only Becky enjoys—or how Hunter convinced Becky to climb up the tower to connect the drone’s charger, to make Becky manage to survive.

One of the vultures flies down the following day and rests on the platform. Inching closer to Becky’s leg, it starts to nibble at the flesh. Waiting for that moment, Becky manages to capture that vulture by the throat and bash it, killing it. After eating it to regain strength, Becky finally manages to connect herself to the harness and pull herself down to the dish, where Hunter’s dead body lies half mangled by the impact of the Fall. Her stomach is already exposed after being torn apart by the vultures. The vulture nibbling Hunter’s flesh looks up at Becky’s bloodstained face and flies away, realizing there is another hunter. Becky, weeping with grief and whispering that she loves her, types a message to her father, inserts the phone inside Hunter’s shoe, stuffs the shoe in Hunter’s exposed stomach, and then pushes off the satellite.

In the next scene, we see Becky’s father, James, driving toward the tower and reaching toward the base to see police cars and paramedics already present. His heart sinks when she sees a dead body being carted off by the paramedics, but then he finally sees Becky, and the movie ends with their tearful reunion.

From the standpoint of the premise itself, Fall is a flawed movie because it inherently exposes how underwritten and cliched the characters are. To undergo closure, the two protagonists decide to climb a 2000-foot tower, which is already rickety and falling apart. But what makes Fall so effortlessly engaging is Scott Mann’s direction, especially during the moments where he records the characters climbing and keenly focuses on the bent steps, the loose screws of the ladder, or the moments of physical prowess exhibited by the two protagonists. It manages to make Fall reveal itself as a movie not having enough depth from an emotional perspective (the pedestrian dialogue doesn’t particularly help matters). Still, as a movie capable of eliciting tension and forcing you to have clammy hands due to Mann’s choosing to deploy wide shots and drone shots to evoke the feeling of standing atop a structure of great height, Fall does its job.

This movie proves Scott Mann’s expertise as a technically proficient and sound director, and Fall is one of those rare and engaging mid-budget movies. The visceral excitement and tension smooth over the dodgy CGI at specific segments. The performances, especially by Grace Caroline Currey as Becky, make you believe in her character arc, even if the writing doesn’t.

Where to watch Fall