Fantastic Beasts: The Secrets of Dumbledore (2022) Movie Ending Explained & Themes Analysed: Fantastic Beasts: The Secrets of Dumbledore picks up right after The Crimes of Grindelwald, plunging right into Albus Dumbledore’s (Jude Law) attempts to create the First Army, and Gellert Grindelwald (Mads Mikkelsen) rallying his followers to wage a war against everyone who opposes his fascist vision. The film in question shifts its focus completely from following the adventures of magizoologist Newt Scamander (Eddie Redmayne), to the greater evils that peril both the wizarding world and the non-wizarding one, with Dumbledore at the helm, crafting strategies to best defeat the dark wizard, Grindelwald. However, the political is also personal, as Dumbledore and Grindelwald have shared history; described by author J.K.Rowling as being “closer than brothers” in Harry Potter and the Deathly Hallows. This bond, alongside a magical blood pact, prevents either man to make a move against the other, forcing them to resort to other paths that lead them to their respective destinations.

Warning: Contains spoilers for Fantastic Beasts: The Secrets of Dumbledore

THE SECRETS OF DUMBLEDORE SYNOPSIS & SUMMARY:

A BLOOD PACT, UNDYING LOVE, AND THE QUESTION OF DOING WHAT’S RIGHT

The Secrets of Dumbledore begins with Dumbledore and Grindelwald sitting across from one another in a cafe, talking about their now-divergent worldviews and the blood pact that prevents them from dueling the other. Questions about Dumbledore’s sexuality had always been a topic of major speculation in the Harry Potter fandom, with Rowling introducing and retconning this aspect as per her convenience without truly committing to it (the books do not highlight this in any shape or form). However, Secrets of Dumbledore acknowledges the romantic relationship shared between the two men: they were lovers, united by a vision to carry out “the greater good,” which actually meant the disenfranchisement of those without power, and the ostracization of those who did not fit the “pure blood” status. Dumbledore, of course, has come a long way since these problematic beliefs, evolving into a symbol of acceptance and hope, trying each day to do what’s right instead of choosing what’s easy.

Yes, there is an acknowledgment of the love shared between Dumbledore and Grindelwald, with pieces of dialogue affirming that they loved each other to the point of creating a blood pact that would prevent them from harming one another. However, this acknowledgment is immensely surface level and does not delve deeper into the dynamics between the two men, or how they actually feel about having shared a deeply intense, moving bond. Instead, the acknowledgment of queerness comes across as strictly performative, taking away from the innate agency of the characters instead of strengthening their core identities. Keeping Rowling’s long history of hateful transphobia in mind, this aspect of the film comes across as a means to shove these issues under a rug, without genuinely bothering to tell the story of a lovelorn, gay man who must move against the man he loves: a man who is on his way to being a fascist oppressor. The nuances are lost somewhere in the sea of damage control and cinematic performatives. 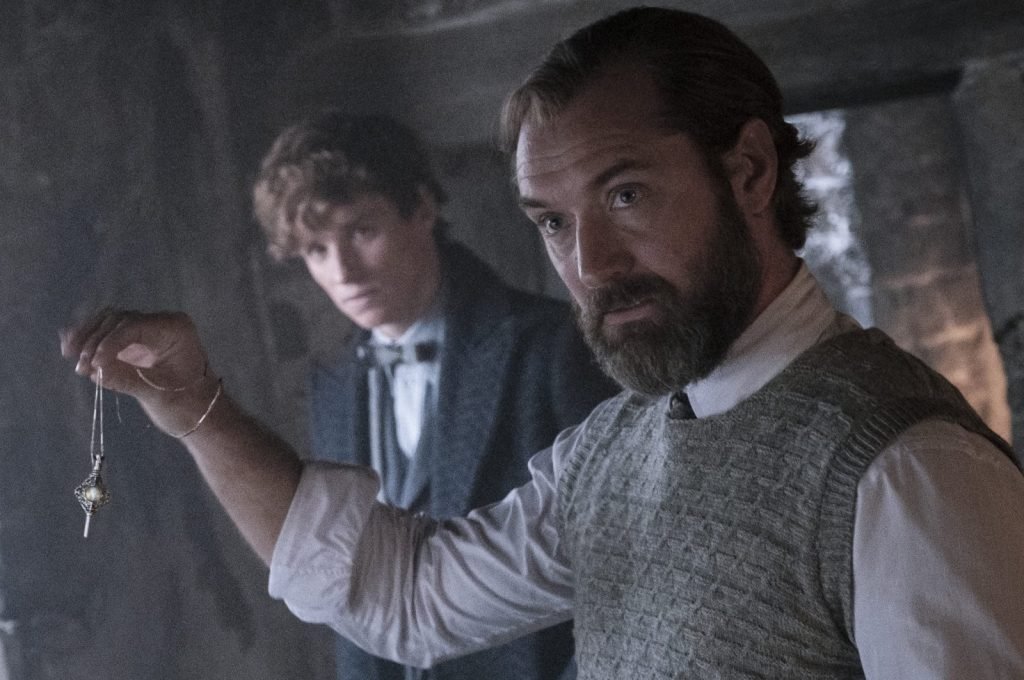 The Qilin plays a seminal role within the ambit of Fantastic Beasts: The Secrets of Dumbledore, as they function both as a plot propeller and a catalyst that ushers in the movie’s climax. We see Newt venturing into the forests surrounding the Kweilin waterfall in China in 1932, to oversee the birth of a Qilin, but he is interrupted by Credence Barebone (Ezra Miller) and two of Grindelwald’s men, who collect the newborn Qilin, unaware that there was another born that night. The reason why the Qilins are so coveted is that they are incredibly rare, possessing precognitive abilities and the gift of recognizing souls that are pure of heart. Grindelwald sacrificed this sacred creature, whose blood allowed him to see into the future, allowing him the gift of foresight by extension, which he utilized in his rise to power and The Walk of the Qilin ceremony which would ultimately make him the Head of the International Confederation of Wizards. However, his plans were foiled.

As Grindelwald was unaware of the Qilin twin, and the first Qilin was exposed as a bit of magical sorcery by none other than Credence, the entirety of the Wizarding World witnessed the true extent of Grindelwald’s nefarious plans. The other Qilin chooses Dumbledore as worthy, bowing to him, but the wizard humbly refuses, stating that there must be someone else who is equally deserving. The creature goes on to choose Viciencia Santos, another candidate in the running, and when Grindelwald starts attacking an already-dying Credence, Dumbledore and Aberforth intervene, and the blood pact shatters, allowing the two former lovers to duel for the first time. Accepting defeat for the time being, Grindelwald disapparates, although he will definitely return in the upcoming installments, as he was defeated in an unmatched duel by Dumbledore according to Wizarding World canon, an event that altered the flow of wizarding history and put an end to the wizarding war.

THE BEGINNING OF THE END

Secrets of Dumbledore ended with a wedding, with Jacob Kowalski and Queenie getting married inside his bakery, wherein Newt, Bunty, Lally, Theseus, and Tina are in attendance. Dumbledore is also present, although he does not attend, walking off alone into the distance as the credits roll. While things turned out for the better, there are things left to do: Grindelwald is still on the run, perhaps maddened by his defeat and willing to go to grosser lengths to actualize his fascist vision, and Dumbledore must strategize to stop him from fulfilling the same. Tina and Newt are reunited, and the former’s absence from the key events of the film strike as odd, given how instrumental she is as a character, both in the capacity of being in Newt’s life and as Head of the Auror Office at MACUSA. On the other hand, there’s the question of Queenie, whose momentary allegiance to Grindelwald lacked true motivation, but now she is accepted back into the fold as if nothing ever happened (the extent to which she aided Grindelwald by the virtue of being a Legilimens is greatly understated here). Aberforth, who was revealed to Credence’s father, found a way to reconcile with his child by the end, armed with the knowledge that he is going to die soon due to his Obscurial powers. The retcon from being Dumbledore’s brother to being a Dumbledore because Aberforth is his father works fairly better in this case, but this is perhaps the consequence of damage control, as this particular plot point falls flat in comparison to the hype around the reveal at the end of Crimes of Grindelwald. Apart from this, it is difficult to imagine Aberforth, a man who endured ostracization and suffering all his life, living in the shadow of his celebrated brother and losing his sister Ariana, abandoning a child knowingly, although how and when Credence was born and ended up in the orphanage has been glossed over completely. There’s mention of Aberforth falling in love, but the details are lazy, taking away agency from the Credence reveal. However, Credence finally gets to experience love and acceptance from family, which was his core motivation, to begin with, when he was first manipulated by Grindelwald in the first film.

THE INKLINGS OF A WAR, THE DEATHLY HALLOWS, & WHAT THE FUTURE HOLDS

War has simply been stalled at the moment, as Grindelwald is set to return and forge a legacy of hate, which culminated in the Second World War, leading to the suffering of millions. Declaring open war upon the world, Grindelwald ousted Minister of Magic Hector Fawley, seizing power and committing atrocities of great scale. Grindelwald’s view of those he deems as an “abomination” is clear in The Secrets of Dumbledore, given the way in which he describes the No-Maj/Muggles as cattle and the cruelty inherent within using the Cruciatus Curse on Jacob. To think that Dumbledore shared this worldview during his adolescence is blood-curdling, especially when contrasted against what most teenagers, including Harry and his allies, had undergone during the same age after Voldemort’s return during Harry Potter and the Deathly Hallows. However, Dumbledore realized the error of his ways, and would eventually go on to defeat Grindelwald’s evil, making sure he is imprisoned in a cell in Numengard till the end of his existence.

What of the Deathly Hallows? The two men, when younger, were obsessed with the magical artifacts, which, when combined together, would make the owner the master of death. Although not mentioned in the film, Grindelwald has already stolen the Elder Wand from Gregorovitch and is using it to his advantage at the moment. The upcoming duel with Dumbledore will obviously pass on ownership to Dumbledore himself, and the events of the Deathly Hallows will unfold as they are meant to. Questions arise as to whether Dumbledore ever found out the truth about who killed Ariana, whether the Resurrection Stone was ever used or sought by either men, and whether Dumbledore himself was aware of the Cloak of Invisibility that was eventually passed down the line of Ignotus Peverell. The rest of the Fantastic Beasts installments might or might not attempt to answer these questions, and it remains to be seen how Dumbledore will go about navigating the heavy burden of opposing someone he deeply loved.

Fantastic Beasts: The Secrets of Dumbledore is currently playing in theaters.

THE SECRETS OF DUMBLEDORE TRAILER

The Best Casino Movies You Can Watch With Your Friends