Severance (Season 1) Explained: Recap, Themes, and Ending Analysed – Severance is an Apple TV+ series that finished its first season this weekend. It is a science fiction psychological thriller created by Dan Erickson. The episodes are directed by Ben Stiller and Aoife McArdle and it has a great cast with actors like Adam Scott, Patricia Arquette, Britt Lower, Zach Cherry, John Turturo, and Christopher Walken. It shows an organization called Lumon Industries that practices the procedure of ‘severance’, which separates the work memories of their employees from the non-work memories. Set up like a dystopian horror, the narrative keeps exploring different themes through the confines of its workplace.

The web series manages to create a lasting emotional impact not just with its brilliant script but also due to other factors such as its cinematography, production design, and music score. Theodore Shapiro’s music creates an unnerving effect in the eerie hallways of the Lumon and elevates the show’s emotional depth. The excellent camerawork by Jessica Lee Gagné & Matt Mitchell and their team is one of the highlights of the show. It helps with effectual narration and builds a feeling of horror in the brightly-lit hallways of the industry that show no signs of ending.


We see a woman lying on top of a table inside a brightly lit, grey-tinted conference room. The establishing shot makes the absurdity of her situation strikingly apparent. Then we hear a voice instructing her, on the order of conduct. After this situation, we are taken right to the snow-filled exteriors with a man screaming inside his car. He gets out and enters the perimeters of his office. A lift takes him to his work floor where we get to know him as Mark (Adam Scott), who works in the macro data refinement division from the Luman industries, along with Dylan (Zach Cherry) and Irving (John Turturo). Their work is to remove the ‘risky numbers’ from the sets of numbers that appear on their assigned computer screens.

Due to the sudden removal of one of their colleague named Petey (Yul Vazquez), a new employee is about to be hired. Since Petey was in charge of this division, the responsibility of onboarding falls on Mark’s shoulders. The aforementioned woman on the table is the new employee and it was Mark’s voice instructing her. While establishing these basic details, the show builds an eerie atmosphere with smiling faces. Then outside, we see distressed Mark driving back home. During a family dinner, he has that night, the topic of severance is discussed with Mark being the one who chose to go through the procedure of severance.

While the existing employees from MDR appear to be conformists to this procedure, the recruit – Helly is rebellious. She does not want her life to be dictated in this way and wishes to resign and get out. Irving and Dylan show resistance to this proposal, while Mark is secretly interested in it. During this time on the outside, he comes across Petey but does not recognize him because of being severed. But Petey recognizes and approaches him after which, Mark’s outie (exterior persona) gets to know more about his innie’s life. Through a revelation of his innie’s mental state, Mark gets increasingly interested in the prospect of a reintegration procedure. Meanwhile, we meet his Boss from Lumon, Harmony (Patricia Arquette) living next door to him as a nurse. 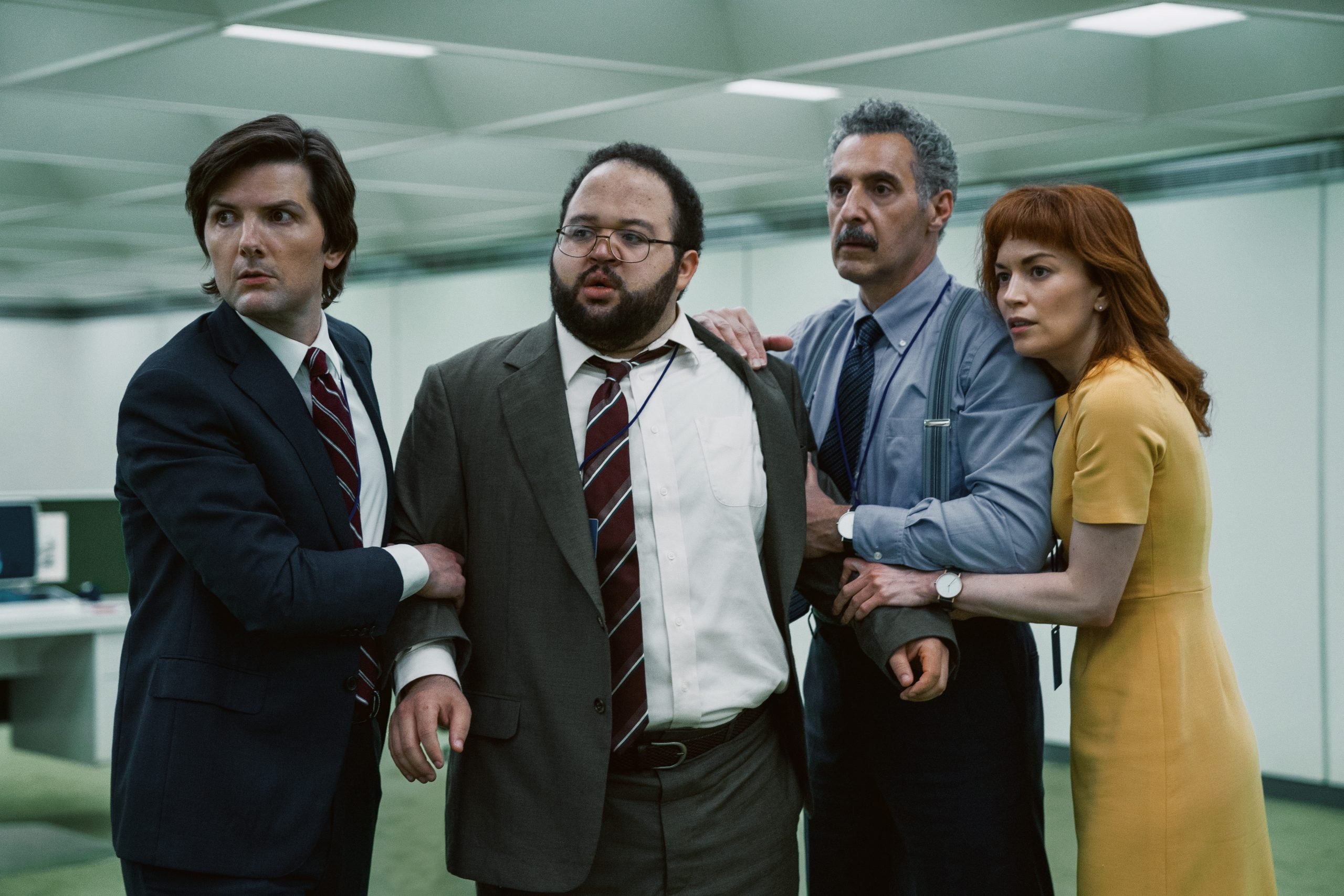 We also meet Mark’s sister Devon (Jen Tullock) and her husband, Ricken Hale (Michael Chernus). Ricken is a self-help book author who leaves the early copy of his recent book on Mark’s doorstep. Harmony gets hold of it and brings it inside Lumon. Mark’s innie secretively starts reading it and gets impassioned by the book’s anti-establishment themes. During this time, due to her attempts to escape, Helly is taken by her group members to the perpetuity wing of the office, which talks about the legacy of Lumon and its founder – Kier Eagan. Their task was to persuade her back from resigning, as assigned by their supervisor – Seth Milchik. Still, Helly makes another effort to leave the place and again, can’t succeed. Later, after coming back home, Mark looks for Petey who he had hidden in this basement. Since he can’t find him there, he drives around to find him near a convenience store. He sees Petey in a fazed mental state, collapse, and die. Mark’s outie attends Petey’s funeral where Harmony arrives as his neighbor.

In the office, Burt (Christopher Walken) from the Optics and Design department visits MDR, and this situation brings forth the growing bond between Irving and Burt. Meanwhile, Mark tells Helly about recreating Lumon’s map that he had found hidden by Petey. Helly agrees to help him out with it. While mapping out the hallways, they find a room where they see a man feeding baby goats. It makes them even more curious about the evil intents of Lumon. Later, Mark tries to join the MDR and O&D teams together to learn about the inner workings of Lumon, but Milchick finds out about this gathering and stops their discussion, and Mark is sent to the backroom. To find out whether Dylan had taken outside a piece of information from Lumon, Milchick briefly awakens him in the outer world. In that brief period, Dylan finds out that he has a son. This news drives his urge to escape. Meanwhile, Irving gets disheartened by the news of Burt’s retirement – more so by what it means for Burt’s existence. So along with Dylan, he joins Mark & Helly in the pursuit to escape. They find a way to know the reality of their outies and to make it possible, Dylan stays back to let the other 3 see how their lives are outside the office.

Also, Read – The Last Days of Ptolemy Grey (Season 1) Review: A sentimental tale interlinking the past to the present

The basic concept, as mentioned before, is about separating the work memories of the employees from their non-work memories. While making a snarky comment on the work-life balance (in the sense of how modern organizations use it as a tool to maintain an image of a hospitable environment), it also keeps sharing its inhibitions of the workplace formalities. With the never-ending eerie hallways, it builds its workplace as a brooding ground for horror. From its requirement to keep its evil intents hidden to its focus on undivided attention to work, the cruelties of the procedure are justified by those in power. The upper echelons make it all sound sweet and convincing while maintaining crystal clear smiles on their faces. The vices of capitalism are deconstructed in its dystopian setting that feels scary close to the real-life corporate culture.

The founder of Lumon, Kier Eagan is looked up to with utmost respect to the point where the boss worships him at her home. The rules and regulations are sacrosanct and are not to be questioned or criticized – but are required to be blindly followed. If this doesn’t smell like image-worship, I don’t know what would! The formation of a cult and putting a person in the place of God to make work look more like a devoted commitment towards this founder – all of it feels distressingly similar to how several organizations work. In such places, followers are rewarded and rebels are several punished. The way the figure of Kier is framed in their workplace and their minds sounds strikingly similar to the Big Brother from George Orwell’s 1984.

The themes of power and control are discussed in terms of wealth creation and valuations. Looking at human beings as mere assets without the freedom to have their choice of feelings is how the discipline at Lumon thrives. The controlling parties are addicted to the control and the lack of self-awareness regarding the impact of their actions creates a scary reality in this fictional world.

Dylan stays back at Lumon and controls the lever that lets Mark, Helly, and Irving see the reality as their outies. Mark wakes up hugging his boss in his sister’s house and gets perplexed. He learns about his wife’s death from Ricken. Meanwhile, he finds a picture of his wife in this house which makes him realize that it is Ms. Kesey from Lumon. While disclosing the cruelties from Lumon to his sister, he informs her that his boss Harmony is present in her house. She learns that the person she knew as Selvig is a Lumon employee and rushes out with Mark to find her.

Irving wakes up in his apartment with a dark painting, where he learns about his military background and a directory of Lumon’s employees. Helly wakes up at a gala of Lumon industry admirers where she learns about her identity as Helena Eagen – the daughter of James Eagen. She learns her outie willingly having undergone the severance procedure to get more support for their project.

Harmony gets a hint of something strange happening, from Mark’s lack of recollection. She instantly rushes out of the house and calls Milchick to inform him about a possible breach. She drives to the place where the gala was happening in order to stop Helly’s innie disclose any secrets about how their lives are inside the workplace. However, that doesn’t stop Helly and she opens up about the cruelties to a big crowd while at Luman. Meanwhile, Dylan loses control of the lever. The episode ends on a cliffhanger note where we see the outie almost switching back to their lives intended by severance.

The 9th episode makes it one of the finest finales as a tightly knit, edge-of-the-seat thriller. The ending opens up more possibilities than answers. Making the season end on an abrupt note makes it all the more excited to know how the narrative will unfold. The realizations by the innies of Mark, Helly, and Irving and their increased awareness of the outer world will yield interesting outputs in the coming season. The end hints towards it by hitting an emotional crescendo.