Written and directed by AJ Edwards, ‘First Love (2022)’ is a romantic drama, now streaming on Hulu. Starring Diane Kruger (Inglourious Basterds), Hero Fiennes Tiffin (‘After’ Film series), Sydney Park, Jeffrey Donovan (Law & Order), and Sharon Leal among others, it presents a story of a family and of a young couple at the time of a financial crisis. We get to witness a boy’s growth into adulthood, with a romantic partner to anchor him through it. While following the footsteps of the classics like Richard Linklater’s Boyhood to Hirokazu Koreeda’s Like Father, Like Son, it attempts to be a poignant look at a young man’s journey.

Kay (Diane Kruger) & Greg Albright (Jeffrey Donovan) live a satisfying life along with their two sons. At the time of the recession from 2008, Greg was one of the employees, who was laid off due to the major financial crisis. Since he is almost in his 40s, it is difficult for him to find a new job, make a living, and navigate a new way of life. Meanwhile, his teenage son – Jim (Hero Fiennes Tiffin) falls in love with Ann (Sydney Park) from his school. From trying to strike up a minimal conversation, their tender relationship starts blossoming soon after with a sense of connection. 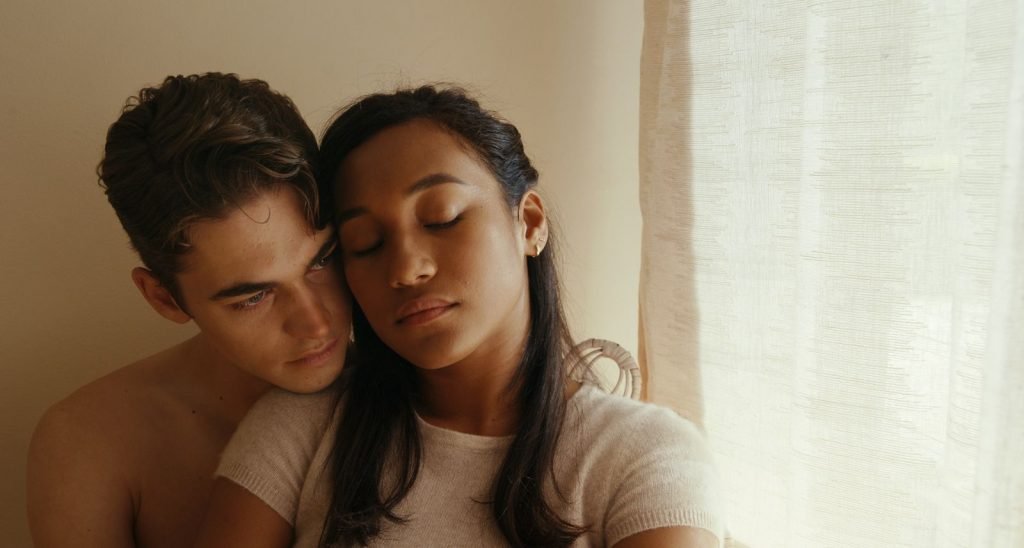 Kay struggles with her responsibility to take care of her Aunt Irene, whereas Greg struggles to find a job that can suit his level of expertise. His brother, whose job does not get affected by the recession, makes him worthless in his position. However, he is still optimistic that something will work out for him, sooner or later. On the other hand, Jim goes through his stages of growing up while trying to be emotionally closer to Ann. Even when her girlfriends make fun of Jim’s quiet, aloof side, she is so smitten by him that she does not pay heed to those superficial details.

For Kay, her Aunt Irene is a source of the connection she strives to hold on to. At home, she is not too pleased that Jim’s ambitions in the banking sector have crumbled down that he is left with lying to peers about his job profile. While they struggle to find a sense of intimacy amidst their emotional distance, Jim and Ann work upon the new stage of their teenage lives.

Until then, they could live as they pleased and cherished each other’s company any time they wanted to. However, ambitions become primary in that particular stage of life and Ann’s mother also advises her to not let her focus on them drift for the sake of a boy. Her advice also reflects her years of understanding and some possible regrets of her own. Afterward, her daughter broaches the subject of her departure to New York for further education from their suburban neighborhood. Jim considers it to be a matter of no worry and notes that they can continue being together despite that. Perhaps that makes her feel stuck and her silence reflects the same.

Meanwhile, after having no success for months in finding a job, Kay is told that Greg needs to get one in order to sustain their current lifestyle. He suggests downsizing and that sounds like a massive crisis to her since both have enjoyed the joys of privilege for her and her family until then. To make their family’s financial profile look better, he needs to find at least a minimum-wage job, which he does not want since it does not match his level of caliber. While Jim is aware of the financial struggles at home, he tries to find a sense of belonging with Ann, who is looking for a way out. Even when they have a few moments of intimacy, her reaction to them reflects feeling stuck in her current life. Their relationship ends on an awkward note of silence and their paths diverge.

While Kay and Greg move to a new, smaller place as a part of downsizing, Kay struggles with coping with this new way of living, where survival takes precedence over pleasure. On the other hand, Jim moves out for his education and seeks a new identity. About two years of his new experiences, he returns to his hometown and meets Ann again, who has matured just like he has. Their conversation reflects their understanding of life as young adults, who forgive each other for the past they shared and seek intimacy again, like a new-found love.

As a genre, coming-of-age has had a particular set pattern. A person moving from a stage of immaturity to maturity, from naivety to self-awareness, where the moments in their lives often lead to some sort of epiphany. They look at themselves and see how far they have come and what they have left behind. Richard Linklater’s Boyhood finds tenders spots in its saga of realizations, where its naturalism impacts the deepest. Barry Jenkins’ moving Moonlight finds its character’s eternal struggle to fit in in a world that just does not want to accept him. Such films become classics because of their layers beyond the basic plotline.

A. J. Edwards’ ‘First Love’ suffers from an utter lack of such layers. Even when it shows a white teen and his family trying to cope during a financial crisis, nothing seems urgent. The stakes in their lives do not matter since they have a fairly privileged life. Throughout its duration, the film focuses on the family’s struggle with meeting the living standards they were used to, in the past. They are restrained by their own idea of status, and it is difficult to sympathize with such a family.

What appears as struggles to them appear to be first-world problems. And I do not mean that the financial crisis was not devastating and that it did not shake the foundations of the global economy and uprooted several lives. But struggling because of feeling ashamed that you are not earning as before and not living up to the standards from the past, feels like a sob story, especially when there are several more pressing issues in the world. It could have still been interesting to see Jim’s way of processing these events being navigated, besides his discovery of love.

However, First Love does not rise above the trope constraints to narrate his journey and relies on the tenderness of its narration. You sense a stylistic inspiration of the likes of Terrence Mallick, especially through the camera movements and voiceovers, in a way that feels unoriginal. What stands out in the film is a grounded performance by Diane Kruger, who keeps you invested in her struggle, to the point you care about these individuals at times. Even the young actor – Sydney Park is highly impressive in her nuanced portrayal of a young adult. Unfortunately, none of that is enough to make up for the script’s limitations and contrivances. 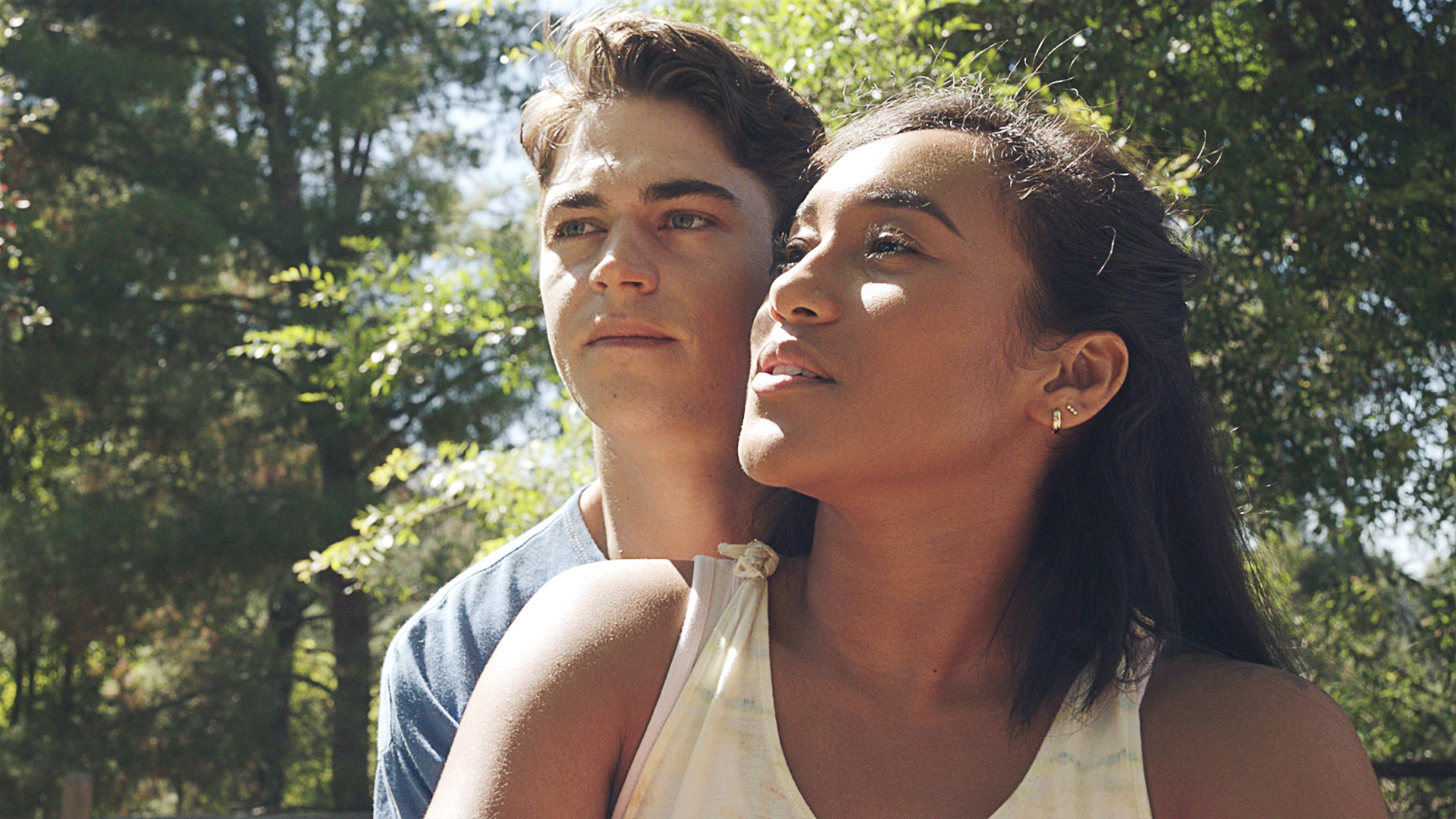 While Ann and Jim get back into a relationship together, Kay and Greg still struggle to make peace with their new downsized lives. After years of not finding a suitable job, Greg stays stuck to his couch and prefers watching television to contributing to the family’s finances in any shape or form. After their heated argument about this subject, he drives back to their old place along with her, and they have an intimate meal together. During that time, he broaches a subject of moving to a different country to get the kind of life they were used to living.

On the other hand, the young couple of Jim and Ann decide to get married to commemorate their bond together. At his wedding, Kay gets emotional about how fast he grew up and how little time they could spend together as a parent and a child. He promises her that he will stay just as close to her and not make her feel abandoned.

In the end, Greg gives a wedding speech about the significance of moments such as this wedding, which become memories that we hold dear for the rest of our lives. On this sentimental note that showcases all its central characters finding connection with another being, A. J. Edwards’ First Love chooses to end its coming-of-age tale.

Related: The Loneliest Boy In The World (2022) Movie Ending, Explained