Flux Gourment Movie Ending Explained & Themes Analyzed: ‘Flux Gourmet’ is a black comedy directed by Peter Strickland starring Gwendoline Christie, Fatma Mohamed, Asa Butterfield, Ariana Labed, and Makis Papadimitriou. It deals with the trials and tribulations of a group of sonic caterers at an institute dedicated to their refinement and exposure to the world. Dealing with art, performance, obsession, and pretense, it is a hilarious film, made in accordance with Strickland’s lavish, madcap style, that is sure to become a cult classic in the future.

At the Sonic Catering Institute, performance art collectives are given a month-long residency where their performances are funded and promoted. The collectives, called ‘bands’, specialize in ‘sonic catering’, the art of basing a performance onstage around culinary and alimentary sounds. They aim to stretch the limits of sound while keeping it related to everything gastronomic.

The resident bands have all their activities during the course of their stay, recorded by a writer, or ‘dossierge’. The bands engage in miming shopping for the products they’re to use for cooking and record the various sounds of a cooking process. During meals with the authorities of the institute, the band members are asked to give an after-dinner speech, a crucial part of their residency, where they explain their ideology or inspiration and the like. Performances are organized for limited audiences after which, the audience members show their appreciation for the artists by engaging in extremely aggressive sexual contact with them. The final performance is a culmination of everything the band has perfected through their stay at the institute, making it essential for their future success.

The current residency involves a band who are without a name, led by Elle, a tyrannical performer whose interpretation of food changed entirely when she witnessed her teacher die from an anaphylactic shock induced by the peanuts in the cake at her birthday party. That such a source of pleasure could have such dire consequences for someone else kicked off her interest in sonic catering, something she then engaged herself with in honor of Miss Lindenson, the teacher.

Billy and Lamina are the other two members. The former is extremely obsequious to Elle while the latter is confrontational and unafraid to voice her opinions. The one rule of their band is that they are completely vegetarian and never perform with anything apart from ‘fruits, vegetables, nuts, and seeds’. The director of the institute, Jan Stevens, is being terrorized by another band, The Mangrove Snacks, because of their rejection to be residents. The dossierge, Stones, is haunted by chronic flatulence while living in fear of its biological implications in his life. His voice-overs in Greek include extremely verbose contemplations on his condition as well as informing us about the rules at the Sonic Catering Institute.

Elle, fiercely protective of her art and just as uncompromising, gets constantly into fights with Jan Stevens, the latter’s name being comically uttered by her in full every time the former appears like she’s a supervillain. Lamina’s sexual relationship with Elle in the past provides her with a degree of autonomy that Billy doesn’t have. Moreover, she can see through Elle’s hollow provocations. 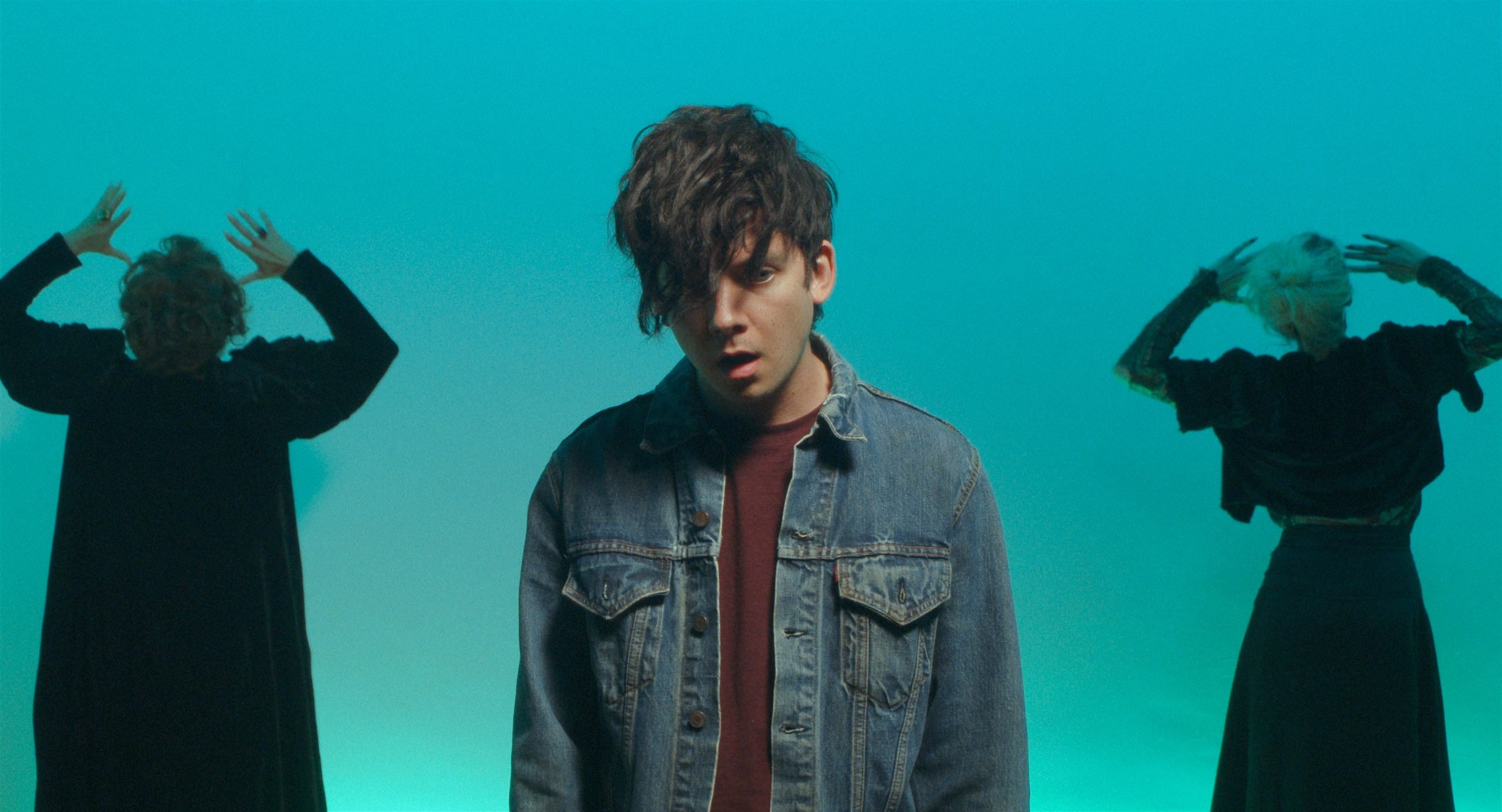 Billy is the youngest of the three. His life was largely molded by his hatred for his mother who was constantly busy with her job and an experience as a child involving a curvaceous woman who cooked and served eggs during a summer trip as a schoolkid. He gets involved in a sexual relationship with Jan Stevens. What transpires over the course of Elle, Lamina, and Billy’s stay, not a pleasant one by any stretch, at the institute, is what the film consists of.

Artists, Technicians, and Satire of Filmmaking

Elle is a performer who craves vocal validation from her audience. She sees herself as a staunch and uncompromising visionary. During a meeting with Jan Stevens, the petty side of such grand ambitions is revealed when she admits that she won’t take Jan’s suggestions even if she knew they were for the better. In the band, she views herself as its nucleus. But she has no technical know-how.

She can’t operate any of the equipment and isn’t involved in anything that remotely requires the usage of technology. In fact, a confrontation with Jan brings out that she isn’t even aware of all the equipment used in their proceedings, as shown by her unfamiliarity with the ‘flanger’. Yet she’s arrogant enough to view Billy and Lamina as dispensable because she views her vision as paramount without conceding any importance to what it takes to materialize that vision. The loggerheads at which vision and technique have always been in collaborative art forms is what Elle’s relationship with her fellow band members embodies.

In multiple ways, ‘Flux Gourmet’ is a satire of collaborative art forms but it especially is so of the film. There’s Elle, the director who abstractly inflates the importance of artistry and her vision, shutting down any dissent and interested only in her own ideas, thereby defeating the purpose of a collective. Billy and Lamina come to embody the technicians, tirelessly involved in the pursuit of bringing the director’s ideas to life with next to no recognition for their work and their indispensable contribution to the final work.

Jan is effectively the producer, interested in results and making whatever Elle, Lamina, and Billy are creating, more accessible for the audience. As the one supervising (and possibly funding them herself), she believes that her opinions can help, even if they compromise the ultimate vision, in making it better, thereby constantly struggling for a creative position. Stones becomes the audience, viewing the work without any input of his own and essentially invisible to the artists, something that’s emphasized by mostly placing him in the background of wide shots. Ultimately, deceiving the audience makes up the final product, just like in the film, as is seen with Elle smearing chocolate mousse on herself while pretending like it’s feces.

Everything in ‘Flux Gourmet’ is transmuted into something separate from its form. The act of sonic catering involves turning food into sound, depriving it entirely of its corporeal presence and purpose, which also means avoiding the dangers its consumption presents. Instead, the sound of everything involved in cooking replaces the final consumption, turning it into an aural and not gastronomic experience for the audience.

Throughout the film, this central subversion spreads out and presents itself in various ways. The act of shopping for food is replaced by miming the actions that make up the practice. This is quite a comprehensive practice as it doesn’t simply involve pretending to pick items out from shelves but includes such incidents as confrontations at billing counters and the duress of retail malady. For the characters too, it is not the experience itself but the form in which it presents itself to them that makes up who they are.

Billy’s attraction towards the woman at the egg station is a sexual feeling that remained entirely psychological while his relationship with Elle, despite having a peculiarly sexual dimension to it, involved childish physical contact. His relationship with Jan is similar in that kissing is turned into measuring the sizes of their mouths while sexual contact involves him sniffing her genitals through her fingers. Lamina’s perception of Elle as everything she isn’t, fearless and autonomous, is what makes her join her. She points out to Stones how Elle was slapped by her father when she laughed at her teacher having the anaphylactic shock. Therefore, it wasn’t the disturbing nature of that sight and its consequence as a child but her guilt at not understanding its significance, as well as her father’s violent attitude in that moment, that shaped her worldview.

If ‘Flux Gourmet’ deals with art, which is inherently expression, the film’s more twisted approach to manipulating expression is where elements in it are distorted. Therefore every expression presents itself through something completely removed from what it really is, hinting at the central characters’ occupations as ‘feckless faux provocateurs’. 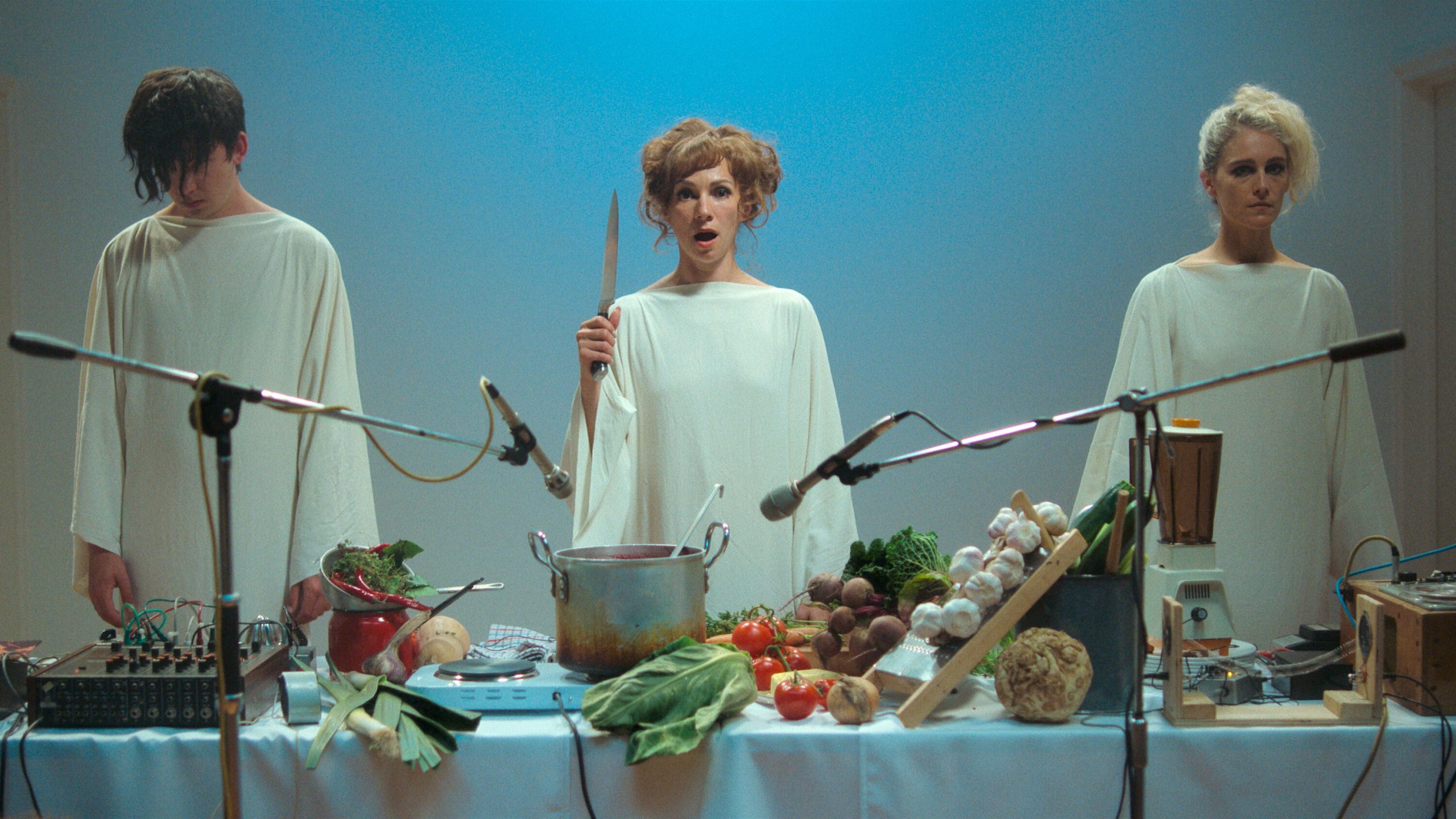 Stones finds out that he doesn’t have a life-threatening condition but celiac disease, which makes him averse to gluten. For their final performance, Director Jan hands over the flanger for the band to use after staging an attack to confiscate it as evidence. At the final dinner with the authorities, Lamina is to give an after-dinner speech in which she declares her intention of leaving the band after the final performance.

Billy decides to do the same and when a scuffle breaks out between Elle and Jan, the former accusing the latter of causing this rift, a bullet from The Mangrove Snacks, possibly meant for Jan, accidentally hits and kills Elle. She dies while being on the verge of giving out the name she had in mind for the band, but failing to do so. At the final performance, Billy and Lamina make a soup out of Elle and feed it to Stones. He smiles on having it and as the audience applauds the performance, Elle is revealed to be among them, alive and hiding in the background.

Lamina’s decision to depart lets her bring out the sense of autonomy and fearlessness that had made her gravitate towards Elle in the first place. It also imbues Billy to do the same after having followed Elle subserviently. Stones doesn’t want to be the center of a performance as he is not willing to display something private to the world.

This is perhaps why he isn’t successful as a writer and why he was uncomfortable at having his literal colonoscopy take place onstage. Instead, he wants to be a part of something, much like any audience member who through relatability with a work of art, views themselves as part of it. Elle remains self-centered to the very end as even in her dying moments, struggling with a bullet wound, all she can utter is the ‘Elle and the…’ part of the band’s name, showing how she hadn’t budged from her decision to have her name in the band’s name.

By becoming the central item of the dish that is cooked in the final performance, she literally becomes what the performance revolves around, as she always wished to be. As Elle quietly watches on, having again deceived the audience, Stones’ final smile signifies our own relationship with film as we quietly acquiesce to the chicanery without questioning it when we’re tricked into viewing ourselves as part of the experience.

Who is cooked at the end?

There are no clear answers provided by the film as to how Elle survives a bullet wound. But given the fact that The Mangrove Snacks were generally involved in non-lethal though disgusting pranks, the bullet that hit Elle wasn’t a real one but only one that caused injury, which adds another reason to the scarf around her head, which is to hide the wound alongside staying hidden.

As to who is cooked, given that Elle had earlier made chocolate mousse appear to be excrement, she might have just done the same with other meats to make it appear like it’s from a human being. Given her obsession with her art, it also isn’t entirely impossible that she may have actually killed someone for the final performance.