Indian representation has truly come a long way. Thanks to Yash Raj Films, Dharma Productions and of course, Shah Rukh Khan, the most popular properties set in the USA would show Indians doing “karwa chauth”, dancing on streets, mountains, and parks to Hindi songs, and then concluding it all with a whole lot of melodrama. Gurinder Chadha and Mira Nair helped the community make some massive strides with films like Bend it Like Beckham (2002), Bride and Prejudice (2004), The Namesake (2006), Mississippi Masala (1991), and Monsoon Wedding (2001). Priyanka Chopra (Quantico), Irrfan Khan (Life of Pi), Shabana Azmi (Halo), and many other artists have ensured the country or its culture is authentically portrayed. And it’s safe to say that Four Samosas is an absolutely brilliant entry to this roster (and one of the best movies of the year).

Written and directed by Ravi Kapoor, Four Samosas takes place in Artesia (which is also known as Little India, California). It opens in a grocery store which is being robbed by a group of four, Vinny (Venk Potula), Paru (Sonal Shah), Anjali (Sharmita Bhattacharya) and Zak (Nirvan Patnaik), in hilarious disguises. Then, the narratives rewind the clock to explain how they ended up conducting the heist.

We are formally introduced to Vinny/Vinesh/”Big Boy” Vin, who is an aspiring rapper and works at a saree shop. He is still heartbroken over the fact that Rina (Summer Bishil) dumped him three years ago. Zak wants to be a Bollywood artist and works at the Chaat House. Anjali is the owner/editor/writer of the Great Little India Times. And after learning that Rina is getting engaged to Sanjay (Karan Soni), Vinny decides to rob Rina’s father (Tony Mirrcandani). That’s where Paru comes in because of her “technical knowledge”. 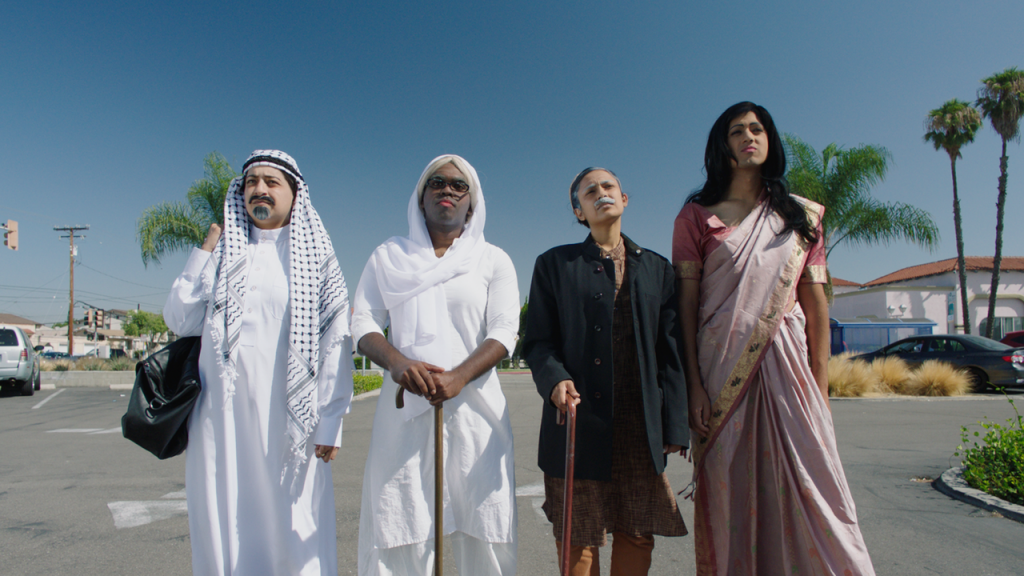 Everything about Four Samosas is excellent. But the most noticeable thing about Kapoor’s movie is the visual storytelling which is very obviously reminiscent of Wes Anderson’s style of filmmaking. The center-framing, the Academy ratio with rounded edges, everything being in focus, the largely locked-off camera that pans, tilts or dollies (no hand-held work), the pastel-colored palette, the colorful title cards, the crisp editing, it’s all there. Kudos to cinematographer Aakash Raj, editor Anisha Acharya, and production designer Caia Diepenbrock for that.

Every single costume is unique and tells something about their character. Vinny exclusively wears oversized basketball vests which shows his proximity to American culture. Paru is on the opposite side of the spectrum as she isn’t an American citizen yet and hence wears kurtis. And then there are The Revolutionaries, whose red ensembles seem like a homage to Chas Tenenbaum’s (Ben Stiller) look from, you guessed it, The Royal Tenenbaums (2001). Kudos to costume designer Venk Modur for that. Additionally, Sagar Desai’s (whose work includes Bheja Fry, Ankhon Dekhi, A Death in the Gunj, Moothon, Ramprasad Ki Tehrvi, Kadakh and Guilty Minds) background score and musical cues adds so much whimsicality to the film’s tone.

Now, although Kapoor adopts a visual style made famous by Anderson, he tells a story that is wholly original, incredibly funny, and very wholesome; thereby making Four Samosas one of the best heist films of all time. Kapoor never loses sight of what’s at stake for every single character. While everyone will relate to Vinny, Zak, and Anjali’s motivations, you need to have a general (but preferably intricate) idea of the Indian sub-culture festering around IITs (Indian Institute of Technology) to understand the chip on Paru’s shoulder. Paru’s monologue about the topic is so well-written (like every other line of dialogue in the movie). But being a victim of the engineering craze in India makes it so much more relatable and so much more funnier.

On top of that, the detours Kapoor takes, the best one being Ashoka’s crown and Kamala (Meera Simhan), to eventually come back to the titular group and give them satisfactory conclusions, complete with slow-motion walks is perfection. Unlike a lot of Indian films or films about the Indian diaspora, Four Samosas doesn’t exclusively gush about the Indianness of it all and critiques some of its negative aspects. Firstly, the whole point about re-appropriation of wealth. Privilege is a thing that Indian films fail to address (but the Indian diaspora never fails to mention). Very few make it to the States because of merit and a lot of us get there because of generational wealth. Wealth that comes from caste and class privilege.

Secondly, Vinny’s dad’s (Ravi Kapoor) whole shtick of abandoning his family to seek a higher purpose in the Hindu religion has some eerie parallels with certain Indian politicians who have shirked responsibility by saying/doing the same. Thirdly and finally, The Revolutionaries’ agenda to occupy a piece of land in Artesia and declare it the “Independent South Asian State of Aisetra”. To which Vinny says, “This is America”. Again, you need to have a good understanding of the dirty politics going around land acquisitions in India to draw parallels with this bit. That said, since Kapoor doesn’t explicitly state these parallels, I’ll give him the benefit of the doubt and chalk the aforementioned three points up to my presumptuous brain.

Coming to the acting, every single performance is phenomenal. The entire cast of Four Samosas deserves all the love in the world for the understanding of their character, their comic timing, their background acting and have I already mentioned how funny they are? The chemistry between Venk Potula, Sharmita Bhattacharya and Nirvan Patnaik is absolutely crackling. Sonal Shah brings an oddball energy and seeing her integrate herself into the group is amazing. What can be said about Karan Soni that hasn’t been said before? The dude has such a natural sense of humor that he can make a certified douche like Sanjay feel likable. Summer Bishil, Meera Simhan, Tony Mirrcandani, Maya Kapoor, Poonam Basu, Ravi Kapoor, those in The Revolutionaries and those in the Histrionics society have limited screen time. But trust them to have you in splits.

As mentioned before, Four Samosas is arguably one of the best movies of the year, one of the best heist movies of all time, and one of the best comedies of all time. Ravi Kapoor’s attention-to-detail and commitment is so commendable. Anjali’s poorly thought out but enthusiastic plans could’ve been limited to exposition. But Kapoor hilariously reenacts them; thereby making them one of the funniest bits in the film. He applies the rule-of-three to Vinny’s habit of knocking down things when he’s angry to show character growth. And he delivers a mid-credits scene and a post-credit scene that are so good that they can give Marvel a run for their money. At the risk of sounding reductive, this is Bottle Rocket (1996), the Paddington duology, American Animals (2018), and a whole lot of India all rolled into one solid movie. If you like any of them, please watch Four Samosas. If you don’t, watch Four Samosas anyway.

My Name is Andrea [2022]: 'Tribeca' Review- An Eye-Opening Take on How Swiftly Castles of Glass can Shatter