Home»Reviews»Films This Week»Gangubai Kathiawadi [2022] Review: An Evocatively Feminist Film Having Some Narrative Pitfalls
Films This Week/Reviews

It was Shyam Benegal’s 1983 film “Mandi” that since its release started the debate regarding the legalization of sex workers in the country. The film was not just ahead of its time, but also for the first time provided a dignified and humanized look on the sex workers. It’s 2022, and it was about time the issue penetrated the mainstream Bollywood narrative. “Gangubai Kathiawadi,” tells the story of a prolific figure of the same name in 60s Bombay, who was also a matriarch of a sex empire. The setting is the lush red-light area of Kamathipura; the visuals beautifully contraindicate the mental state of Gangubai, as the film is told purely from her perspective.

Based on S Hussain Zaidi’s ‘Mafia Queens of Mumbai’, the movie is directed and co-written by Sanjay Leela Bhansali- one of the last exponents carrying the grand old Bollywood style flair for colour and visual opulence. The supporting cast is solid here, as it often is under an SLB production. Seema Pahwa plays a cruel, yet earnest brothel-in-charge, a refreshing break from the ‘joint-family roles’ the theatre actress has been playing for a while now. Shantanu Maheshwari is a shy young man with feelings for Gangu, effectively evoking new feelings inside of her she thought she never could. The standout, however, remains Vijay Raaz as the trans madame Razia; the actor once again proves why he’s one of the most underrated versatile actors we’ve had. 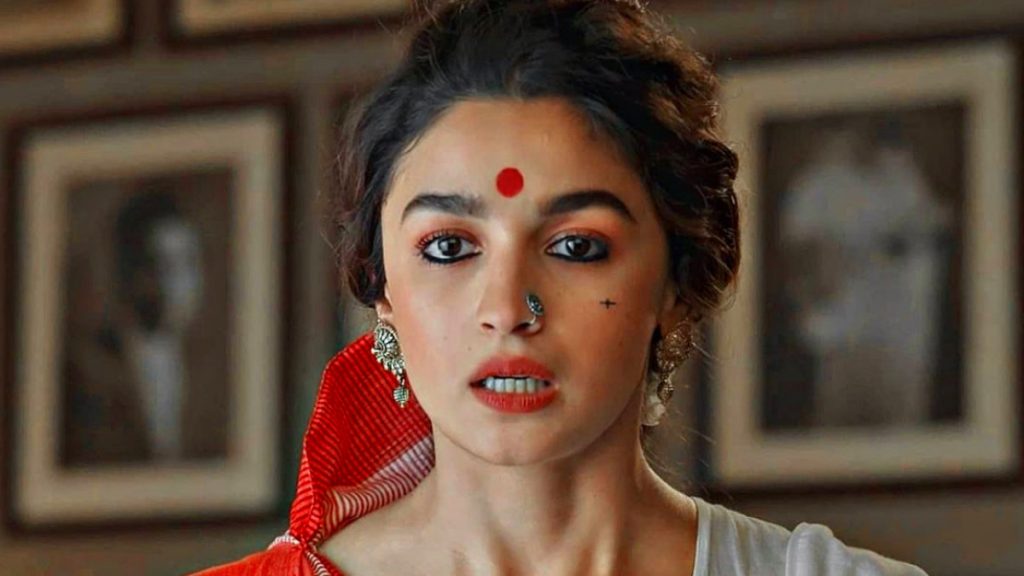 Your takeaway from the new Alia Bhatt starrer grand-operatic film – Gangubai Kathiawadi – isn’t going to be limited to the incredibly captivating performance the actress gives here, but on how long and to what extent have you been on board with the brand SLB has created over the past decades. “Gangubai Kathiawadi” opens with one of the most evocative opening scenes I’ve seen in a Bollywood film in a while; you keep wondering how to feel about what you’re seeing as it takes its time to truly establish its full context, even when the tone has already been set. Through the inciting incident, we follow a young girl’s journey as she migrates to Bombay with someone she loves as he promises to make her a big heroine in Bombay. Gangu, who keeps pictures of Dev Anand in her room, never meets that fate. Instead, she is sold into prostitution, where she finds herself being sucked into its world till she fully accepts reality for what it is.

The film works in making us root for her because the approach by the makers never seems to look down upon her character. Key figures come into Gangu’s life, leading her into exploring new paths. The vintage car is given by the powerful mobster Karim Lala (Ajay Devgn) not only becomes an extravagant tool but a vehicle for Gangu to enter into the world of mafia. Later, a journalist (Jim Sarbh) having a bleeding heart helps her navigate into the world of politics.

Checkout: 15 Indian Movies That Centre Around a Dysfunctional Family

Bhansali’s screenplay along with writer Utkarshini Vashishtha set up the tone of the film really well. I did expect boisterous exchanges combined with hot-blooded melodrama going in. But the film, sticking only to Gangu’s point of view, helps us empathize with her better, while at the same time also severely restricts our knowledge of the broader world she finds herself in and how the mechanics of that shape her dynamic personality. However, the ineffable visual splendour remains intact, especially the way in which it elevates the scenes in the film that remain key junctures in portraying her character arc. The long take in the first act that starts with a musical garba number, ends while zooming onto Gangu’s face as she confronts her lover being overwhelmed, unaware that she would later be betrayed.

Contrary to this, there’s another brilliantly staged and choreographed sequence towards the film’s second half where she’s dancing her feet off with her friends at the brothel whom she’s now embraced as her family, without any guy in sight. In another scene, we see Gangu playing cards with the only man that’s ever caught her attention, Ramnik, while she stands in the balcony above the streets of the red-light area, with melancholy looming around in the streets.

It felt almost as if Bhansali was making ‘Gangubai Kathiawadi’ as a love letter to his father’s older production days. I was delighted. But more so than that, I was refreshed at seeing one of the major proponents of mainstream melodramatic Bollywood come up with a film having an intact magnetic flair to its feminist themes. It explained what made him one of Bollywood’s most devoted pictorialists.