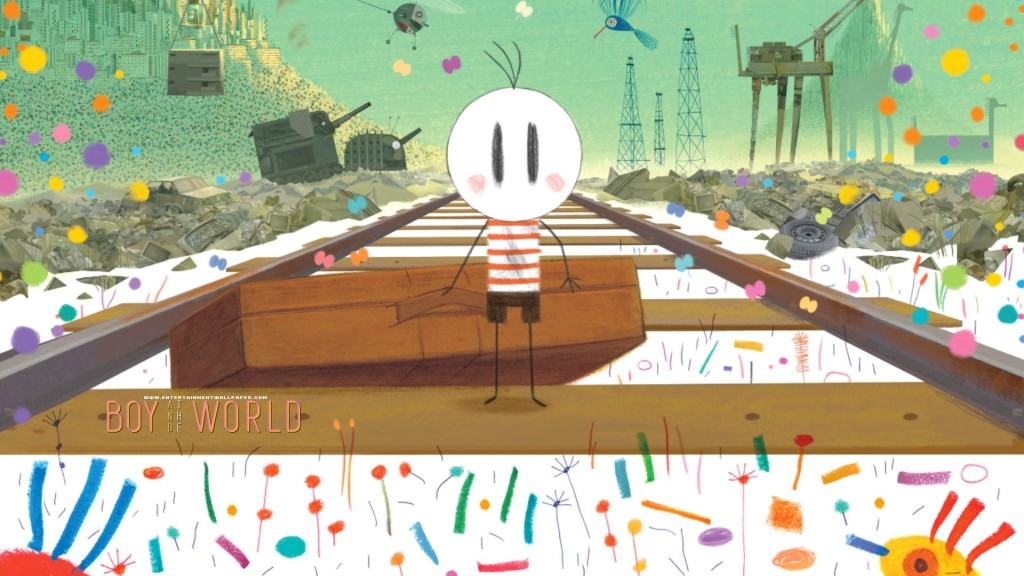 It is interesting to see how animated films have matured with the time, and brought gradual necessary changes to appeal adults as well. Now animation genre is no more kids’ genre. Animation genre is expanding their horizon fusing visually delightful scenes to appeal kids with the subtle complex narration that appeals to adult, keeping the humour quotient intact that is understood by kids to keep them engage throughout. Most of the films nominated for Best Animated Feature prove the point, like Inside out, complex & bleak toned Anomalisa which is meant for adults, When Marnie was there and last but not the least Boy and the World, except for Shaun the sheep which was out and out children’s film.While Inside out went inside the mind of a kid and showed complex functioning of brain breaking down each emotion, and their adventure that defines the psyche of that kid, Boy & the World does exactly opposite of it; Boy & the World takes a look at the ever changing  world & the dynamic mechanism of socio-political functioning that influence the boy emotionally and physically. It uses boy as lens to see the horror of the daily life. 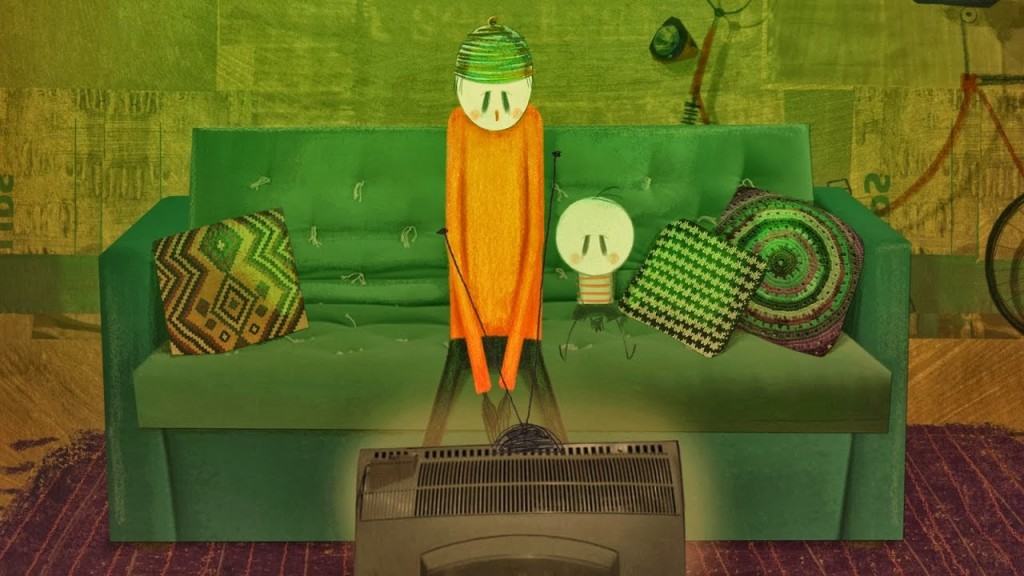 Boy and the World is tragic & starkly bleak allegory of how miserable the world has become , showcasing perpetual vicious cycle of changing world’s implications on human condition and human relationship that is governed by human needs against their own will. Pea-nut sized kid protagonist- having circular face and pencil stripes eyes, stack of sticks like body, no mouth and countable hair tufts- living with his parents in a small hut of rural wonderland. In the lap of beautiful nature which has become distant dream for city dwellers, “kid in Greenland” is lost in captivating and serene beauty of surrounding who climbs up to the cloud, and flies like superman to see the infinity decorated with lush greenery, fruits, plants, mountains and rivers. His life is perturbed when his father leaves for the city in hopes of finding a job. Dipped in sadness and inconsolable, the boy impulsively decides to go find his dad.

As the boy starts his journey, the tone of the film shifts gradually where colours get too darker, possibility of looking at infinity in the sky is obstructed by skyscrapers, grass is replaced by cemented roads, free spirited humans are held captive as workers and social discrimination is clearly stated. First he winds up at cotton agricultural farm, where he is bewildered on observing the mechanism of workers working endlessly, and then he finally lands up in the city. He follows zombie like muted workers who are bounded to one pre-defined routine to cluster of slums. Political vibes are realistically captured by fascistic military-police guarding the city or blink & miss scene where slum dwellers stand up against the growing discrimination. The film touches new height of realistic tone with the montages of clip from real world showing how industrialization is destroying motherly earth. 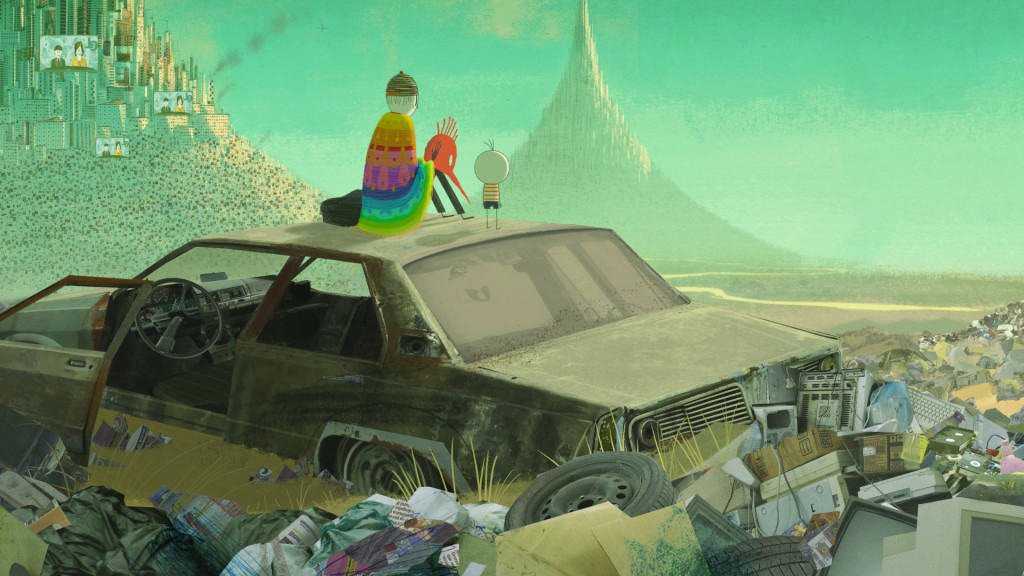 Zombie like worker class living in slums is perfectly juxtaposed with the elite class living in airborne futuristic city that perfectly echoes the economic inequality in the society.  There is one of the most heart wrenching symbolic scene that perfectly sums up the world we live in, where free rainbow-coloured phoenix is shot by black bird looking (Nazi symbol) bullet firing machine and ultimately kills the phoenix. Boy and the World doesn’t give simple answers by the end, nor it tries to fool the audiences for sake diluting the bleakness it has shown throughout. Instead director Alê Abreu leaves it to the audience to introspect their own life and loss of innocence.

Interestingly, while animation technology is advancing at speed of light, Boy and the World’s animation comes as a pleasant surprise that has been entirely done using free style sketching, and colouring them with crayons and water colours that looks like children painting book coming  alive on the screen.  The dazzling visuals looks so  amaze-balls that it seems to ease the darker tone of the narration to good extent. While there’s no real dialogue, characters speak gibberish language, as Abreu tries not to feed the events but figure out on own using the ground breaking visuals and musical score. Now that is challenging but rewarding in a way. Boy and the World clocking in 80 mins of running time is not only the best animated film of the year, but also one of the best films of this year. 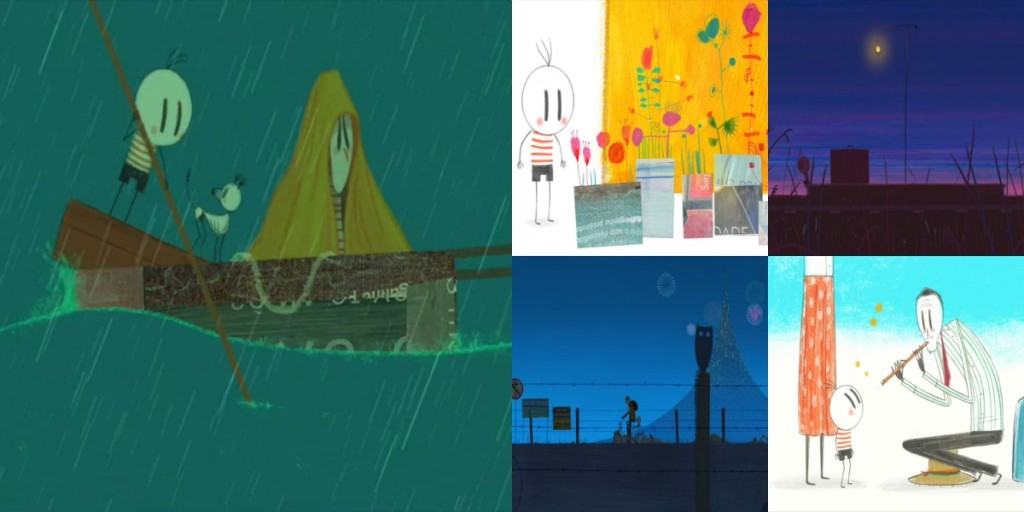 How I Met Your Mother : Interview of Alyson Hannigan (Lily Aldrin)