Despite all the crassness, I had a bigger problem with the shoe-horned pathos that it seems each of these films had to have, usually two thirds of the way through. Films ranging from American Pie to Loser to 40 Days, 40 Nights to The Benchwarmers to Kevin Smith’s own Clerks movies have been guilty of suddenly circumnavigating the bawdy humour to immediately remind the audience to quickly invest some emotion into the characters, done at the expense of the comedy.

So this is one of the reasons the terribly flawed Jay and Silent Bob Strike Back at least has some redeeming and enjoyable qualities, because it eschews this nauseating convention and simply always tries to be humorous (keyword: tries). This one little thankful aversion sets aside this movie from its contemporaries, though it still succumbs to a lot of the other issues of this comedy films.

It seems that a lot of the raunchy and male-orientated tones these kinds of bawdy comedy films had also affected this pre-9/11 curiosity, released less than a month before the towers were hit. When it comes to the male gaze and phallocentrism in cinema, I’m no raging feminist, but I do have an issue with the male-centred film drooling over women when it’s taking up valuable joke-making time. When our main men Jay and Silent Bob cross paths with a sexy group of four women, travelling along America for a jewel heist, the screen-time of these sexy women is mostly limited to them dancing scantily or posing in erotic cat-burglar latex – this all has me wondering, it’s turning me on and all … but where are the jokes??!

The most useless scene of this “comedy” shows these four women acrobatically avoiding the trip-wires to gain access to the jewels, a sequence whose punchline is that last women to successfully cross pass the trip-wire ends up farting on them and sets off the alarm. However, there is exactly 1 minute and 40 seconds of humourless nothing as we watch them (and their stunt-doubles) back-flip along the wires without touching them at all – haha? 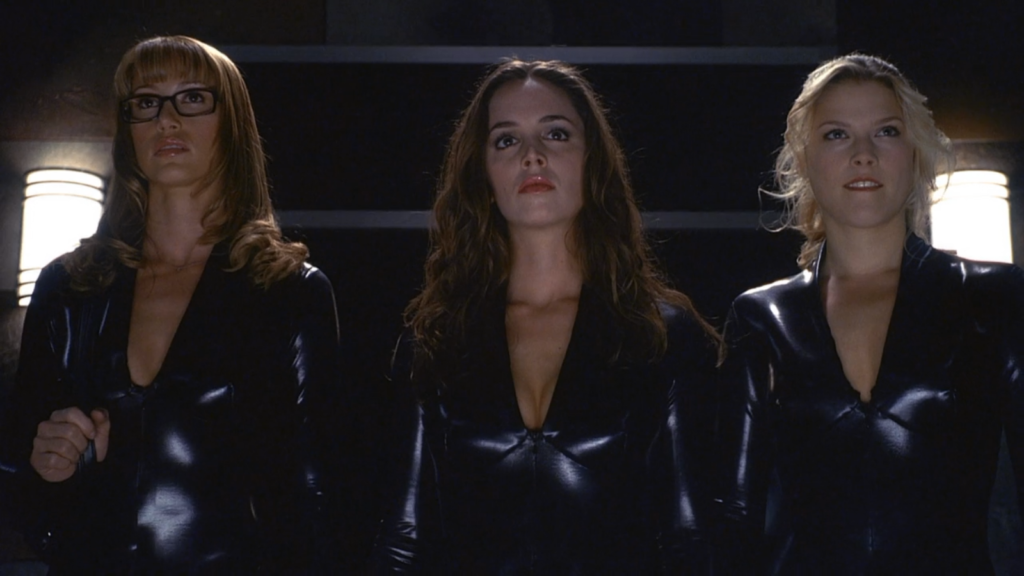 The most wasted character of this set of useless characters plays the love interest to Jay. The immensely attractive and sweet-hearted Justice (Shannon Elizabeth) immediately falls in love with the potty-mouthed Jay, and why not? – he speaks his dirty mind, he’s disgusting, yet confident and playful with his jocular dialogue, and he possesses a shabby attractiveness. Still, it’s a hell of a stretch to get this beauty to get the hots for this stoner sweetheart, which she does so immediately when Jay gawks at her in a Mooby’s burger joint.

Another big issue with a lot of the bawdy comedies of the just-before-and-just-after-9/11 era is that quite a few of them seem to use up all their jokes in the first 20 or so minutes and then had to forego humour to get the story moving (which was usually unengaging anyway). And here is yet another issue that JaSBSB avoids, though it does have the opposite problem. Although the success of the humour is inconsistent throughout, the first twenty or so minutes are actually where the weaker material is, with the rest of the run-time getting somewhat stronger with the humour as it goes on.

The reason for this tiresomely unfunny first part of the film is because of how self-referential it is. Writer-director Kevin Smith (also playing Silent Bob) began constructing his View Askewniverse, starting with his break-out feature Clerks (1994) and tying every movie he made since to each other, featuring recurring characters, overlapping events, and plenty of in-jokes. If you haven’t seen those films before, get prepared for a bunch of throw-backs to them in this film’s first act, featuring some cringey cameos by View Askewniverse alumni Jason Lee, Ben Affleck, and the clerks from Clerks. It comes across as not only plot exposition, but features plenty of eye-rolling jokes and throw-backs to Smith’s other films, as if they’re the only films to ever exist. It is in this section here, and a sequence at the end where Smith parades even more View Askewniverse characters, that the winking-at-the-camera meta-ness of this film nudges at the audience so much, it hurts their ribs. 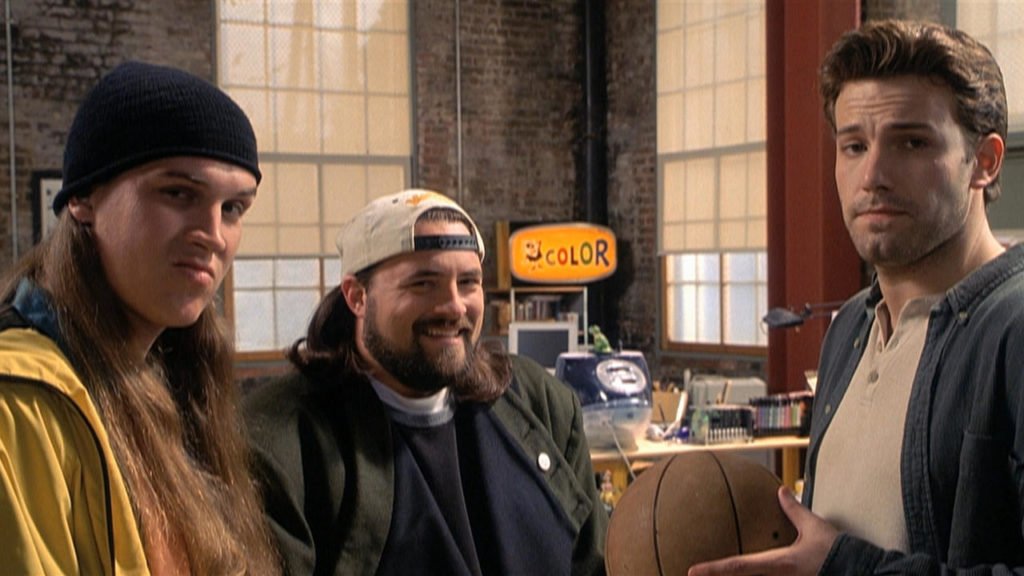 One rather short, yet particularly expensive-looking in-joke feels like quite the tangent. Jay has a paranoid fantasy of what the scientists are doing to a monkey they just rescued, which shows a Planet of the Apes-meets-View Askewniverse sequence featuring a few of Smith’s recurring characters in ape-ocalyptic situations, with Dante from Clerks needlessly referencing his “I’m not even supposed to be here today” quote for the second needless time in this film. On the plus side, maybe this whole nauseatingly referential sequence is worth it for what precedes it, which is Jay saying “maybe it’s a conspiracy, like in The X-Files?” then he looks into the angled camera as it zooms in on his face as he hilariously declares “Roswell style!”.

Smith has a better time referencing other movies than his own. A funny behind-the-scenes scene taking place at Miramax Studios shows Jay and Silent Bob crashing in on Matt Damon and Ben Affleck (now playing himself, with frosted hair) working on a sordid cash-in Good Will Hunting 2: Hunting Season, which seems to lampoon the lame redoing of classic catch-phrases in the same way Smith was earnestly doing so earlier to his own films. But it’s a funny moment that isn’t so navel-gazing, and shows Smith flexing his parody muscles.

It’s too bad he isn’t quite as adept with acting as he is with writing – and yet, he is the character that doesn’t even use his own dialogue (at least until the end). The successful humour of his films comes from the dialogue and character mannerisms, rather than slapstick gags and visual humour. Smith in particular cannot pull off a silent character and rely solely on his physical presence, and it seems he’s just playing this kind of character because he initially decided he’d give himself a non-speaking role in his debut, Clerks, and now it’s unfortunately stuck.

Jason Mewes as Jay, on the other hand, works some wonders with his dialogue. Every word that comes from his cigarette-and-weed-smoke-tinged throat sounds authentic and confident, really pushing the comedy in the right direction. It’s surprising to see on-screen Mewes with his shit together, since he apparently didn’t when on set, abusing both heroin and alcohol at a time, and was told when production finished by Smith that he had to go to a clinic. He’s been sober since 2010.

A comedy film like this that makes me ponder over my very multifaceted and very mixed opinion on most other films in the genre. Overall, this is a wonky and often tiresome and often unfunny (as in it tries to be funny and falls flat on its face, slapstick style) film that I will probably never watch again from start to finish. But there are plenty of good jokes scattered throughout it, that I can watch and watch over and over again (especially Seann William Scott’s hilarious first line, which gets a stupid laugh out of me).

This seems to be the fate of plenty of comedy films, like The Naked Gun series, The Party (’69), Caddyshack, and Fat Pizza, which have some real quality jokes scattered in an inconsistent hotchpotch of differently styled jokes that vary in success. JaSBSB seems to be yet another somewhat frustrating experience where every fourth joke lands, and every thirteenth joke illicits a hearty laugh – and there’s still at least a joke every half a minute (unless there’s scantily-clad women involved). Kevin Smith has had better successes and direr failures than this, though at least now he seems to be shedding the View Askewniverse and all its in-joke references – now that he has announced Jay and Silent Bob Get Rebooted, hopefully it’s as least funnier than his last two films.

Elvis (2022) Review: A Great Biopic that’s both, a Hagiography and a Folktale