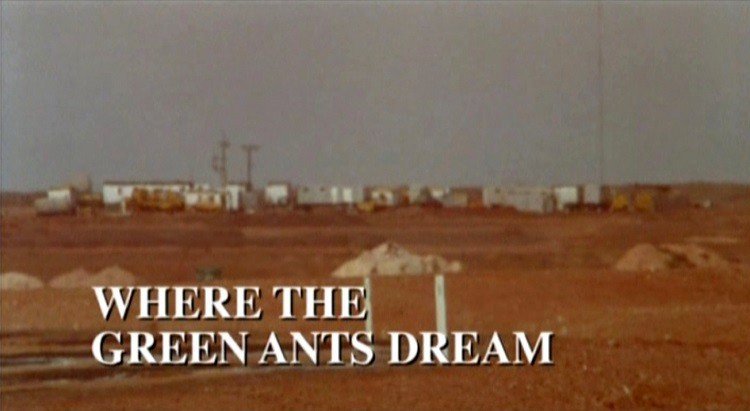 It was quite an honor to have the great German director Werner Herzog make his first English-language feature-length film in Australia with Where the Green Ants Dream. Over his prolific and varied career, Herzog has travelled to all corners of the globe to unearth the untold stories from the most foreign of lands. By the ‘80s, he was widely considered an arthouse wonder, with films like Aguirre: Wrath of God, Heart of Glass, and Fitzcarraldo stunning audiences with their vast and penetrating descents into the more unforgiving terrains of the world and the human condition. Although Where the Green Ants Dream is a slightly lighter affair than his previous powerhouse films, it still has the undeniable Herzog stamp, bringing an epic quality to both the landscapes of Australia and the people that inhabit (and affect) it. It is an important and topical subject (even in 2016) that is often told and shot in an unfussy mild-mannered way, though it has its moments of quintessential Herzogian glory, along with some well-placed moments of humor to keep this apocalyptic story from becoming too depressing.

Out of all the treacherous areas and stories in the world, Herzog chose a sunny and deserted country town in the Northern Territory and uses the real trial of Nabalco v Milirrpum to make this drama (with plenty of comedy) of this land rights tale. Fictionalizing the names, but keeping the story the same, the mining efforts of the Ayers mining company are thwarted by sit-in protests of the local Aborigines who have claimed the land that is being mined, believing that the mining is disturbing the dreaming of the green ants which could have catastrophic results. The white folks try bargaining with them, but the assigned spokesperson Dayipu (Roy Marika) and his translator Miliritbi (Wandjuk Marika) cannot be swayed – until the two visit Melbourne city and just before leaving spot a large green military plane they express an interest in, so the company lends it to them in goodwill. Despite this, their trial still goes to court and the land rights of the natives are mused over, with the sympathetic judge even comparing this case to a similar land rights dispute in North Africa. 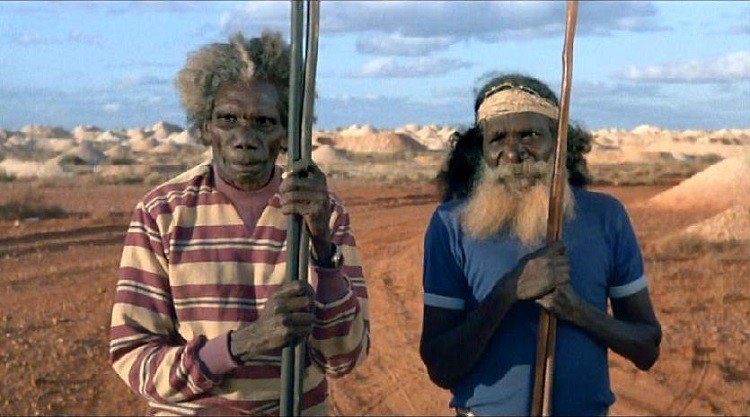 This is a great film, if a bit flawed, evidently affected by its low budget (only $700,000), some of its creative decisions, and other constraints that make the quality of the film patchy in certain scenes, but it still stands as a well-intended and masterfully ambitious story that illuminates a troubling issue at the right time when other Australian filmmakers or media outlets weren’t doing the same. The Marika uncle and son duo were activists, not actors, but were actual witnesses of the Nabalco v Milirrpum trial and what they performed in the film is likely very close to what they did during the actual trial. They show their limited acting skills with the English-speaking Wandjuk merely speaking his dialogue rather than acting it, and Roy’s performance mostly comes from his hard-set, stoic, and seemingly unmalleable facial structure. However, these limited acting abilities don’t devalue the film too much, especially as the dead-pan performances from the two certainly helps with the more humorous moments that they have (like how Dayipu deals with his new digital watch during the trial).

Herzog aficionados may claim that this film’s visual ambitions aren’t up to the same standard as the titan’s other films, with the cinematography sometimes feeling a little lackluster and a little too straight-forward, with even some of the longer establishing shots looking a little damp. Perhaps the visual style of this film more than any other in Herzog’s filmography has been most compromised by budgetary and time constraints, though it still boasts a number of stunning landscapes and well-staged set-pieces, such as a few jaw-dropping shots (namely the opening credits establishing shot, as well as the final shot) of the mining efforts over the desert, which show a large expansive landscape with hundreds of holes that have all been filled again with soil.

As the first credit title shows, Herzog dedicated this film to his mother, who died shortly before production started. The emotions Herzog felt affect the film in an abstract way, such as the tornado storms that appear at the beginning and end (filmed in Oklahoma) – Herzog admits in the DVD commentary he isn’t exactly sure how these scenes relate to the main story of the film, but he feels they are appropriate abstract images that influence the feeling the film evokes. Given that the Aborigines believe that the disturbance of the green ants dreaming will cause a catastrophe, it appears Herzog put his emotions of immense loss and grief into the similarly apocalyptic feelings that permeate this film with its own regards to the loss of heritage. Another seemingly disconnected and abstract story-strand is that of Miss Strehlow (Colleen Clifford) whose dog has disappeared in the mining tunnels, so she patiently waits for him outside the entrance, a bowl of dog food basking under the hot sun awaiting him, this futile hopefulness also appropriately adding to the gloomy feeling of loss the Aborigines would feel. 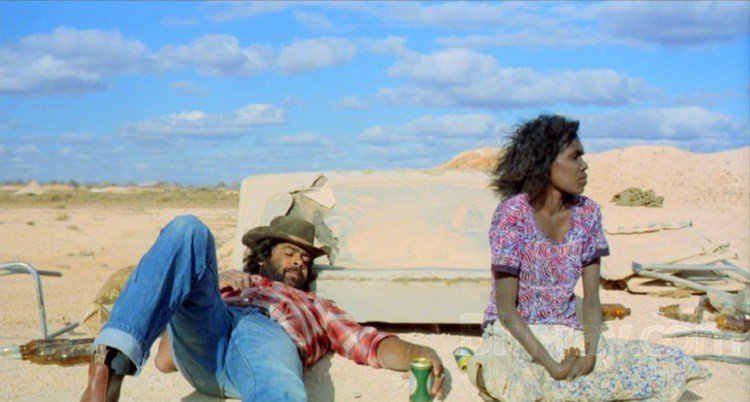 Although it was filmed entirely in Australia (apart from the Oklahoma tornado scenes) and focuses on an Australian issue and could even claim to have an Australian identity, this film was a German production, financed and produced by Werner Herzog Filmproduktion and the German TV broadcaster Zweites Deutsches Fernsehen (ZDF). However, Herzog employed screenwriter and journalist Bob Ellis as dialogue consultant, who also appears in the film as a shop clerk, and fellow Aussie film director Paul Cox (whom Herzog was living with while down under) as a stills photographer, who also appears in the film as a photographer. The film makes fairly good use out of Aussie acting icons at the time like Bruce Spence as the rather likable and inspired protagonist and Ray Barrett as the stroppy and amusingly anguished foreman.

The idea of the film came to Herzog whilst he was visiting Australia in the mid-‘70s, promoting Aguirre: Wrath of God at the film festivals, when he began soaking up the local news, particularly the case of Nabalco v Milirrpum. Nabalco was an Australian-Swiss consortium who mined in sacred Aboriginal areas of the desert for bauxite, which the local Aborigines protested against and took the company to court. They lost the case, regretfully so according to the judge, but their efforts were well publicized and it opened the white Australian consciousness to the natives of this land and their sacred attachments to it.

Herzog’s interest in the trial developed into making it into a fictional film that relayed heavily on the facts, and he apparently wrote the script in three days (before being edited by Bob Ellis, who filled it with Australian-isms). Herzog recollects in the DVD commentary that the Mandjuk uncle and son came from Yirrkala (the area where the real trial centred around), two or three kilometres from the northernmost point of Australia near the Gulf of Carpentaria, and he remarks how their community was very traditional and free from white cultures such as alcoholism and television – however, he claims the local Aboriginal extras he got were constantly drinking and insisted they have a television to watch kung-fu movies and pornography. The desert town was filmed in Coober Pedy, which Herzog claimed was a rough place that had no real administration or police until after they filmed there.

Herzog says he always makes films that he believes are simple and easy to understand, yet also profound, so he was surprised when the film wasn’t successful with audiences. It premiered in competition at the 1984 Cannes Film Festival based on the merits of Herzog’s stature alone, though did not attract much positive attention (fellow German filmmaker Wim Wenders ended up winning the top prize Palme d’Or with his film Paris, Texas). Australian columnist Phillip Adams took particular umbrage with the film immediately after its premiere, rubbishing it in both a circulated press release at the film festival and in an opinionated column claiming that land rights in Australia had improved by the time of the film’s release (funnily enough, it was Adams who initially suggested to Herzog the Marika duo should appear in the film). It’s true that Aboriginal land rights were becoming more respected in the courtrooms throughout the ‘70s in the wake of the much publicized yet unsuccessful Nabalco v Milirrpum case, which lead to a number of successful land rights disputes for the Aborigines, including the passing of the Northern Territory’s Aboriginal Land Rights Act in 1976. Though folks like Adams may say this film was outdated before it was even filmed, it’s overly-optimistic to state that only a decade of slowly gradual growth in Australia’s recognition of Aboriginal land rights had been enough to disqualify the social importance of this film, especially at a time when no Australian filmmaker was tackling the issue.

Along with Adams’ article were a number of reviews from the Australians, Americans, and Europeans that ranged from mild to negative, attacking the film’s well-intended, but flawed execution of its political stance and the romanticising of Aboriginal lore through the invented mythology (the scenes that explain the spirituality and the science of the green ants is mostly an invention coming from Herzog’s multicultural-minded imagination). These unenthusiastic reviews seemed to result in the film’s lackluster release, even in the country, it was shot in, where it got briefly circulated throughout some of the arthouse cinemas across Australia. 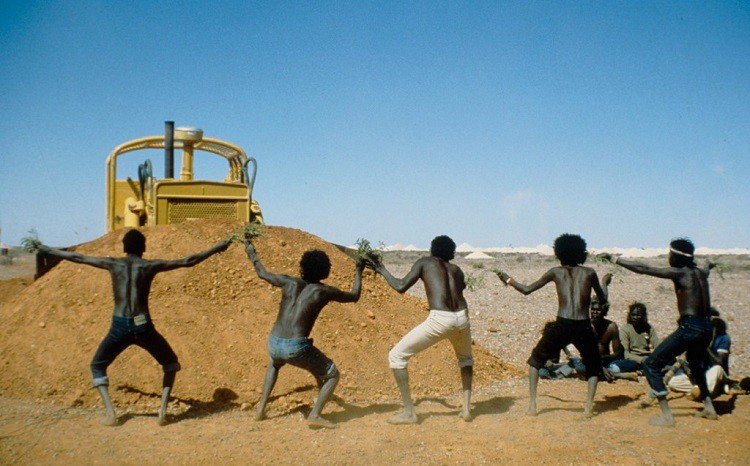 Where the Green Ants Dream is considered a somewhat dud, released in the wake of Herzog’s highly regarded German masterpieces, but I believe it’s certainly in need of a revival, as it is nowhere near the disaster critics claimed it was upon release and it never has quite accumulated the sort of new-found appreciation it always deserved. It should be held in high esteem close to that of Herzog’s German films, as it is one of the more socio-politically significant films to be made in Australia, and (despite some flaws in its presentation) a rather entertaining, spectacular, and amusing one to boot.

10 Most Underrated Hindi Movies from the 80s