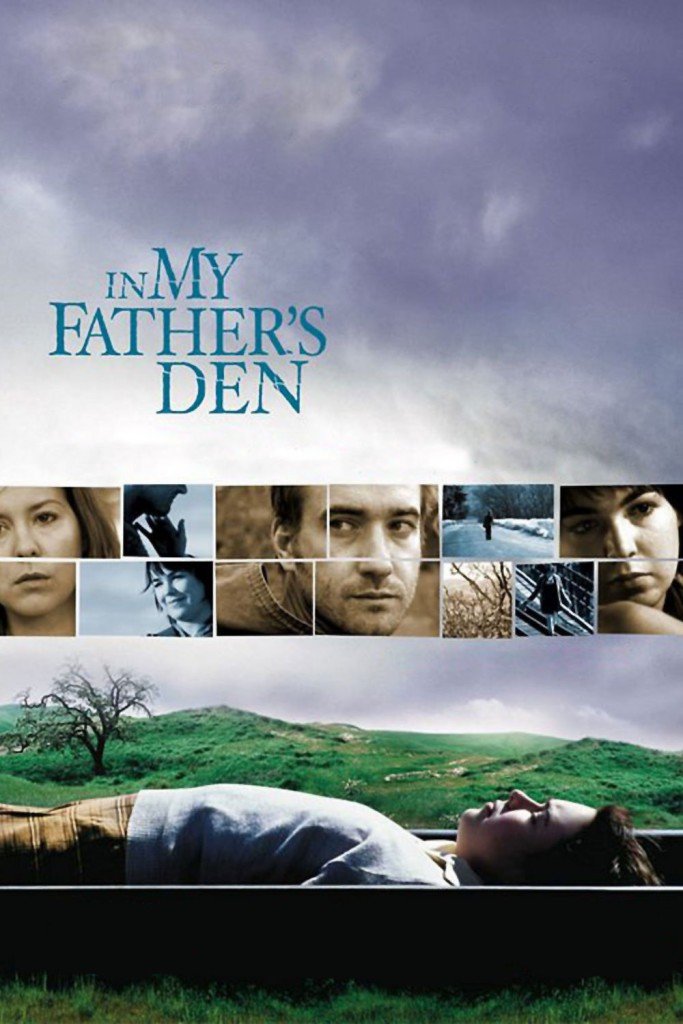 I think we all would have a different opinion on the question: ‘why do you watch movies?’ For me, movies are the medium where I could gaze at the unparalleled, relatable human emotions. We face harsh experiences and numerous rejections in our life that may in turn harden our heart, ensnaring our feelings. When that time comes in my life, I tend to watch sad yet beautiful films. Those movies’ tangible human emotion dethaws the hardened heart and reassures: ‘You are still human!’ New Zealand film-maker Brad McGann’s “In My Father’s Den” (2004) gave me one such profound emotional experience. The authenticity & intimacy of human emotions I felt in the film genuinely earned my tears. “In My Father’s Den” belongs to the category of films referred to as ‘Cinema of Unease’. The term (coined i reflects the dark, contemplative nature of New Zealand’s vital films (for eg, “Vigil”, “Heavenly Creatures”, “Once Were Warriors”).

‘Sins of Father’ is one of recurrent theme in cinematic medium, where the prodigal son would return home to reflect on his past and learn few dark secrets about his family. The theme had been covered to the point of turning it into a cliché. Initially, the characters and the situation they find themselves in “In My Father’s Den” seem a bit banal. Celebrated war photographer Paul Prior (Mathew MacFadyen), who had run away from home as a teenager, returns back to the small New Zealand hometown (after 17 years) to attend his father’s funeral. His elder brother Andrew (Colin Moy) didn’t expect that Paul would return. Andrew has married an ultra-religious woman named Penny (Miranda Otto) whom Paul thinks bears some resemblance to their own deceased, religious mother. Andrew’s teenage son Jonathan (Jimmy Keen) seems to be a lonely, introverted kid. The old photos and brief flashbacks indicate that some dismal thing had happened in their past. The alienated Paul after an argument with his brother decides to stay for few days to help out with selling of their old house, other properties, etc.

Paul stays at the old house and memories starts flooding him. He also inspects his father’s private den, full of music records and books. Paul spent a great deal of time there with his father, while Andrew was closer to mother. The ‘den’ reminds Paul of other sinister, life-changing things. Up to this point, I think the film travels in a familiar path. But, gradually the character of Paul rises above the stereotype and takes us deep into his emotional dysfunction. Soon, Paul confronts a teenager named Celia (Emily Barclay) in his father’s abandoned ‘den’. She often sneaks up there to read books and listen to music. When Celia learns about Paul’s achievements as photographer, she begins to admire him for leaving this constrained land to make a name for himself. Celia is a talented, thinking individual, who also dreams of an escape. Her mother Jackie was once Paul’s girlfriend. Now Jackie lives with an abusive boyfriend, who terrorizes Celia. The kindred spirits Paul and Celia form a beautiful as well as a melancholic bond. The dark side of small town mentality perverts their friendship and also the forbidden pasts arrive to haunt them. Once again I felt the film might take a familiar path, but as one character says in the film “I wish it were as simple as that”. 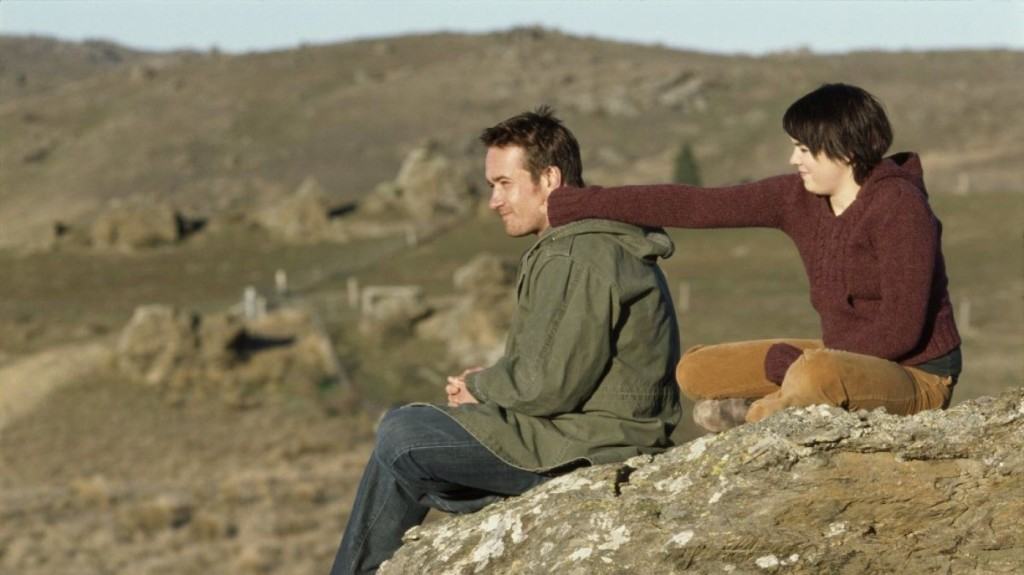 Adapted from Maurice Gee’s novel, Brad McGann’s script circumvents the chances to devolve into melodramatic territory. But, the script isn’t without its imperfections. In one episode we see Celia interviewing Paul for her school assignment. It was a light-hearted, memorable scene where the two of them finds emotional resonance in talking with each other. It helps us understand the nature of their bond, but we get an unexpected twist out of nowhere. Celia goes missing and McGann introduces non-linear approach to show how beautiful their friendship was, while laying alongside the townspeople suspicions, regarding Celia’s disappearance. This tonal change from character drama to mystery/thriller wasn’t well established (events’ timeline are also bit confounding while watching it for first time). By changing tracks mid-way, McGann might have wanted to give clear insight into the narrow mindedness of small town community, which had driven away the protagonist. Another reason might be to enhance the complexity of the mystery behind Paul’s departure. The narrow-mindedness is a familiar concept that doesn’t come across singular in McGann’s treatment. However, the writer/director has enmeshed the mystery superbly with Paul and Andrew’s characterization which demands us to go for second-time viewing to re-watch certain nuanced portrayals.

For example, in one scene we see Paul picking a random girl at bar. While having sex with her, he uses a belt to choke himself (known as ‘auto-erotic asphyxiation). This could be written off as some kinky sex scene the first time we watch it, but after getting to know his dark secrets (in father’s den), it’s easy to grasp why Paul seeks sexual gratification through literal suffocation. Similarly, Andrew rejects Penny’s sexual advances after hearing from Paul that Penny looks like their deceased mother. We can grasp the meaning for the placement of this odd scene only after learning the secret his mother had encountered in the ‘den’. Jackie gets so agitated when she finds Celia and Paul chatting in the den. Most people in town speculate that a teenager and young man can’t have a relationship other than being sexual. But, Jackie’s surely thinks their relationship is sexual in nature because she is relating it to what she did with Paul’s father (which was purely sexual).  McGann’s loads the script with abundance of symbols like ostrich, horses, seashells, atlas, and Celia’s poetic short story, which adds some context to the characters’ nature. Director McGann’s naturalistic mise en scene provides good insight to character’s preoccupations. Consider the scene, when Paul hesitates to enter the church while his father’s funeral service is going on. His face is framed in a closeup and the slightly opened glass door reflects the cross. The image of his face and the cross indicates his psychological affliction (also words in the sermon reflect his estrangement: “part of our grief may be regret for things done or left undone; words said or not said”). 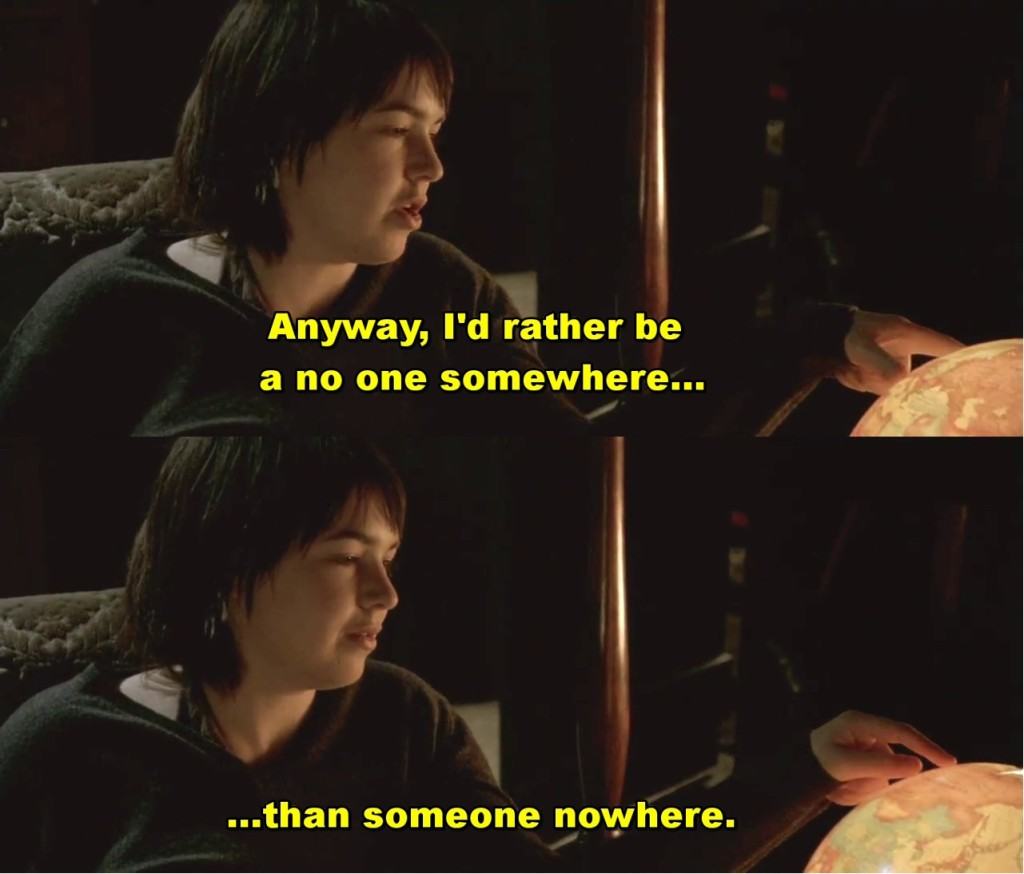 The director repeatedly indicates upon the barrier exists between Paul, Celia and others in the community. Higher aspiration and intellectual friendship are unknown things in their society. The people of the close-knitted community hate others’ judgment while easily passing judgment on others. Intellectual Celia with the help of Paul is constantly breaking the barriers set by her community. Nevertheless, people try to put barriers between Celia and Paul. When Jackie’s boyfriend beats Paul and throws him out, Celia calmly looks from the other side of glass window, indicating the barriers placed between them. In fact, the film’s most heartbreaking moment happens when Celia had crossed those barriers and passes judgment on the petty mind of community’s insider (“You people!” mocks Celia). Director McGann hints about the themes of voyeurism by recurrent visual motif of camera lens, photographs and old footage. The voyeurism aspect gives the clue about gloomy backstory and Celia’s eventual fate.

Macfadyen (Darcy of “Pride and Prejudice”) offers a riveting performance as Paul. He had profoundly transformed into the emotionally scarred individual. The cold demeanor he displays to his brother and the human connection he finds in Celia are elegantly displayed. Macfadyen is particularly brilliant in the pivotal moment after hearing the hard truth. The sense of tragedy and knowledge & memory of the past overwhelms him to cry aloud. In those heartbreaking tears, we see Paul finally mourning for the loss of youth, mother, Celia and also for his scarred self. Emily Barclay (in her debut) imbues more depth into the narrative. Her eyes filled with longing and aspirations are hard to forget, especially after seeing her predicament. The quiet and sad farewell scene at the end filled me with tears. At that final moment, I was not just thinking about the on-screen character’s cruel fate; I was also thinking about the death of the man who had made an amazing debut feature (director McGann died of cancer on May 2007). While the film’s final visual offers some possibility of hope and redemption, McGann’s demise had extinguished what could have been a great voice of New Zealand cinema (one of McGann’s desire was to adapt Iain Banks’ ‘The Wasp Factory’).

“In My Father’s Den” (128 minutes) is a riveting, multi-layered and emotionally charged piece of cinema that’s hard to push away from our memories.