Tamil filmmaker Arun Matheswaran – director of Rocky (2021) – once again returns to paint a simplistic mural of vengeance where his meticulous brushstrokes add more fuel to the burning fury. Similar to Rocky, Saani Kaayidham (Pulp Paper) unfolds in an unreal, closed cinematic world with a smidge of real sociopolitical issues. Of course, the ‘pulp’ in the title reminds us of the violent auteur of modern American cinema. But the mixture of elegant staging, minimalist narration, and emotional forthrightness also brings to mind other violent auteurs like Sergio Leone, Sam Peckinpah, Takeshi Kitano, and Park Chan-wook. In fact, it’s still too early to attach the label ‘auteur’ to Arun. However, he exhibits certain wonderful cinematic sensibilities (some may dismiss it as ‘self-indulgent) that I hope keeps finding good and a little more profound subjects.

Dilapidated, abandoned buildings, sporadic use of square-ish (4:3) black-and-white frames, the vast expanse of coastline, a road journey, an old automobile, smart chapter-wise narration, sensible yet vulnerable children, and brother-sister bond – the many visual and narrative aspects of the director’s debut feature Rocky recurs in Saani Kaayidham.  Vigilante justice and violence can come across as cathartic or lyrical only through stylized cinematic frames. Arun Matheswaran understands that and he isn’t trying to offer a revisionist take on the sub genre. 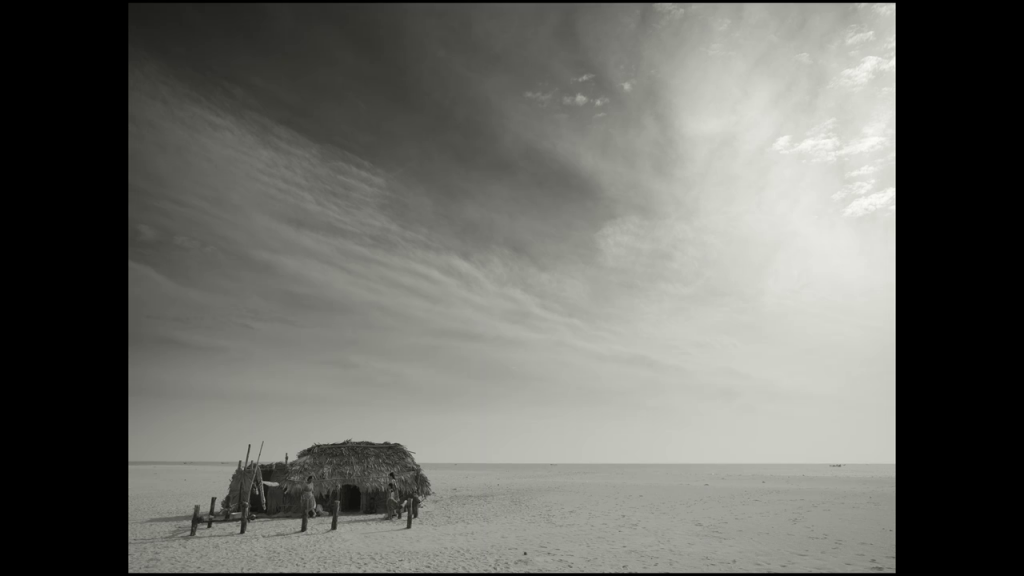 Tamil cinema’s girl-next-door Keerthy Suresh plays the traumatized Ponni with a fury which perfectly chops away that image. Set in the late 1980s, the tale starts with Ponni’s husband getting humiliated by his despicable bosses belonging to the dominant caste. Interestingly, this act of humiliation touches Ponni’s job identity as a police constable. The exhausted Ponni assures her insecure husband that this is just a job which brings money. The first of the many ironies in the narrative; a man disgusted by caste oppression feels belittled when his own position in the familial hierarchy is questioned. Of course, the nasty dominant caste bosses know how to provoke the wounded man to get a rise out of him so that they can freely indulge in acts of unimaginable atrocities.

Related to Saani Kaayidham: The Northman [2022] Review – A Simple Tale of Revenge with a Grand Vision by Robert Eggers

The violence irreparably scars Ponni. Her husband and precocious little girl, Dhanam are murdered in cold-blood. There’s also Ponni’s half-brother Sangayya (a surprisingly good Selvaraghavan), who remains in the periphery and befriends Ponni’s little girl. When the police officer and the lawyer facilitate the escape of the perpetrators, Ponni has no choice but to become an avenging angel. She discards the turbulent history with her half-brother, and the deadly duo travel in a matador van to mete out the denied justice. It’s a nihilistic journey to serve back the pain and brutality.

Saani Kaayidham neither attempts to convey a negative impression on the ensuing bloodshed nor includes a last-minute well-intentioned message on how ‘violence is a double-edged sword’. It’s a straightforward portrayal of comeuppance that pushes oneself to find catharsis through the revenge-seekers’ uncontrollable aggressive impulses. Arun emphasizes on ironies and dabbles with character contrasts to bring a semblance of a depth and something to reflect upon. However, Saani Kaayidham largely works because it impeccably emulates the adrenaline rush of riding a roller-coaster or visiting a haunted house.

Considering the new-age Tamil filmmakers’ penchant for using old Tamil songs in key sequences, and since Saani Kaayidham has a brother-sister duo, it’s natural for Tamil audience to anticipate some reference to Pasamalar – the 1961 melodramatic classic featuring the highly memorable on-screen brother-sister characters played by Sivaji Ganesan and Savitri. Director Arun includes the iconic song from Pasamalar in a circumstance that can be read as darkly comic and twisted. Another fascinating reference to an old Tamil film happens towards the end when an extended, bloody fight sequence unfolds in an old theatre campus that screens Kalai Arasi (1963) – a campy alien invasion comedy, probably the first of its kind in Indian cinema.

Furthermore, there’s a clever citation of Mahabaratham where the humiliated and harassed woman was somehow saved by divine intervention. But even the Deva (police officer) of this tale stands on the side of evil men. Anyway, Ponni is a fighter who doesn’t expect much from the suffocating world. And the rare glimpses of her vulnerability never degenerate into self-pity. The sense of irony director Arun exhibits regarding visual impairment is also pretty clear and poignant. Amidst all the gazes of the predatory humans, it is the sightless boy who sees the cruelty Ponni is subjected to. Such carefully implanted textures keeps us engaged thoroughly rather than simply moving between one violent action set-piece to another. 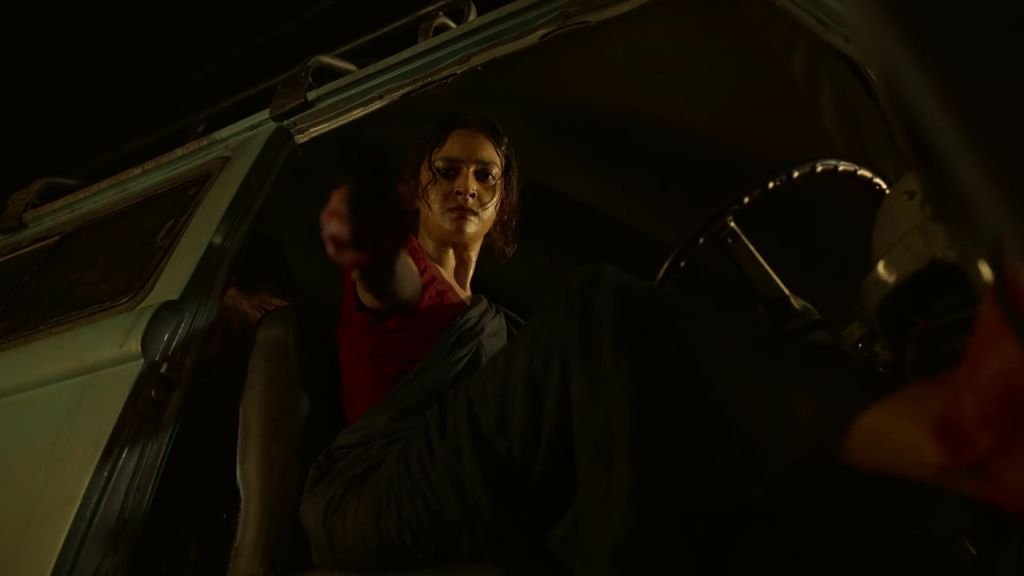 While Ponni is so consumed by hatred, Sangayya’s empathy in key moments brings certain stability to the otherwise frenzied moments of violence. Sangayya at one point does fail to quell Ponni’s murderous impulse, and it leads to the film’s most cathartic and darkly humorous violent sequence. The crazy bulls charging towards the matador are viciously run down by the matador in the aptly titled chapter ‘The Matador Murders’. Arun Matheswaran understands how to frame violence so that it doesn’t become totally numbing; and kudos to the spellbinding cinematography of Yamini Yagnamurthy.

The sexual violence inflicted upon Ponni is largely hinted and leaves a heavy psychological impact. The violence Ponni and Sangayya inflict upon the numerous bad guys is embellished with small details. Nevertheless, the glimpses of gory violence are mostly juxtaposed with frames showcasing protagonist’s wrecking ball of a rage. While the narrative unfolds in an unreal world, there’s truth in the filmmaker’s handling of the emotions. The trauma breaks Ponni in myriad ways. But after fulfilling her quest, Arun doesn’t leave us with a gnawing sense of emptiness. Ponni once again gains her humanity and sense of trust. It could have simply ended with fire and explosion, but it ends with Ponni walking away from fire and guiding another soul.

I don’t know for sure, but maybe the on-screen tales depicting people’s unbearable grief and rage could purge the darkness we nurture within. Of course, there will always be the objection that Arun glorifies or romanticizes violence in his movies. The term ‘exploitative’ will probably follow him around. Some might continue to oversimplify issues and blame everything on onscreen depiction of violence. At least the filmmaker is conscious of who his audience are and what his intentions are. Unlike the current generation of mainstream Tamil filmmakers, who do fan service for their star actors through slo-mo shots of stupidly staged violent action scenes. Director Arun Matheswaran attests that his craft has more valimai (strength) than the works of those dumb freakin’ beasts.