“The heart of the world is the next place, where we want to go, where our desires go”, says a character in Gabriel Martins & Maurilio Martins’ tableau of poor Brazilian neighbourhood, In the Heart of the World (‘No coracao do mundo’, 2019). The chasm between identity and expectations is what plagues the characters populating this mosaic film as their lives within the impoverished, constantly gentrifying society has reached a saturation point.

In the Heart of the World is set in the neighbourhood of Contagem, situated close to the beach city of Belo Horizonte, the area where the film-making duo comes from and based their earlier short films (‘Contagem’ and ‘Dona Sonia Borrowed a Gun from her Neighbor Alcides‘). With the mixed cast of amateur and professional actors and blazing cinematography, Gabriel and Maurilio move between dramatic naturalism and genre narrative, although their street-level study is much more intriguing than the crime genre preoccupations.

The film opens at the neighbourhood square, where Marcos (Leo Pyrata) celebrates his birthday with his girlfriend Ana (Kelly Crifer). The sense of intimacy shared between the lovers is cut short by a distant gunshot. An enraged Marcos reprimands the slacker Beto for botching up the hit job. He advises Beto to flee from the city, who approaches his store-manager elder brother Miro for some money to flee. Beto interrupts Miro’s secret love-making session with Rose (Barbara Colen), a married woman who toils in her hair salon and also wants to become an Uber driver. Marcos lives with his teenage sister and deeply religious mother, the later perpetually disapproves Marcos’ indolent nature. He temporarily teams with an enterprising middle-aged single mother, Selma (Grace Passo) to works as a school photographer.

If all these characters feel like they are stuck and want to go that ‘next place’, Ana’s life is actually on the move; but in a very literal manner. She works as a bus conductor, travelling back and forth, without really moving forward. At home, she takes care of her senile father. Crime, of course, hovers over the neighbourhood and becomes an essential strategy for survival when all else fails. Moreover, crime creates contradiction and irony as we see a mother fondly talks with her child on her mobile, while methodically loading a gun. Selma comes up with a plan to commit burglary in an upscale gated-community which Marcos instantly approves. However, the heist job becomes a test of Marcos relationship with Ana since he is forced to recruit her. 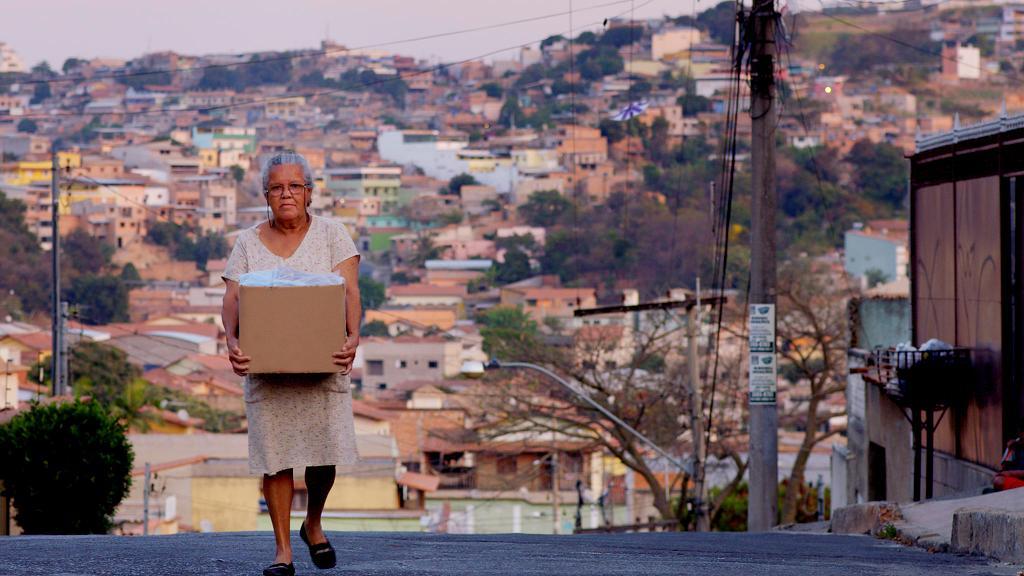 Directors Gabriel and Maurilio have primarily conceived the feature as an impassioned neighbourhood symphony, showing that the place is full of intriguing, complex character as opposed to (incorrectly) generalizing it as the den of criminals. The cinematography (by Leonardo Feliciano) gracefully attunes to the details of everyday life and vibrantly captures the district (the ingenious use of soundtrack also adds to the movie’s tone). The film-makers’ take their time setting up the scenes, attempting to offer a perspicacious look at the place and its inhabitants; for instance, the moment Selma waxes poetic about her hopes as the camera gradually zooms out. The glacial pace also helps capture the camaraderie (or the lack thereof) between the characters.

The plot development does feel a bit inchoate. The mechanics of heist narrative in the later portions are utterly predictable (even though the robbery itself is very well-staged inside an up-scale house enveloped in darkness) and narrows its focuses on Marcos, Ana, and Selma. This pushes the characters like Miro and Rose into the periphery, almost rendering their presence desultory. Furthermore, the male characters aren’t very well-written; Marcus remains a shirker to the end and we don’t get a sense of his inner conflict as compared to Ana or Selma. The directing duo, however, does a good job in choosing the right actors for the part (especially Kelly and Grace). The overweight girl with a prison record who plays Marcos’ friend is interesting adding to the ensemble (must be a neighbourhood resident).

Kleber Mendonca Filho in his brilliant debut feature Neighboring Sounds (2012) subtly dealt with the mosaic of multi-generational characters in a middle-class neighbourhood while totally eschewing the promises of a genre narrative (a film with fantastic sound design in recent years). Gabriel and Maurilio Martins’ In the Heart of the World (121 minutes) may never attain (or even attempts to) the profundity of Mr Filho’s feature, but they have done a fairly good job in weaving a humanistic story from the place closer to their life. Eventually, it’s a tender examination of a place and people, forever evolving.

In The Heart of the World Rating: ★★★