An artist’s creation introduced into the public forum can outwit the artist’s intention and transcend into something else. Or as in the case of Pepe the frog – a cartoon-character-turned-internet meme – into something monstrous. In 2005, underground comic artist Matt Furie created a slacker comic strip called ‘Boy’s Club’ in which he introduced his anthropomorphized frog character named Pepe (a play on “pee-pee”). The underground comic scene in the US, particularly in the 1960s, perpetually challenged the pop culture’s campaign of selling happy, wholesome images. But it’s also not always about disputing one’s culture and beliefs.

Underground comix also captured the absurdity of the mundane in an hilarious, ironical manner. Furie’s Boy’s Club seems to belong to this category. It seems to amusingly capture the ennui of perpetual slackerdom, naturally peppered with gross-out pranks.  Pepe, a happy-go-lucky character, like its creator with a simple feels good man expression however soon escaped the gravity of its cartoon origins.Arthur Jones’ wildly entertaining documentary Feels Good Man (2020) charts the chillingly weird journey of Pepe the Frog, from being the seemingly innocuous stoner-slacker to becoming the mascot of far-right nutcases.

We haven’t yet deeply understood the damage online culture has done to humanity on the whole. If this dog-eat-dog society shuns us from showing a hint of vulnerability, then in the anonymous-trolls-filled internet world vulnerability can really be deadly. But seriously, what can the trolls who all graduated from the ‘school of assholery’ really do? A lot actually: from misappropriation, emotional manipulation to triggering a tsunami of hatred. 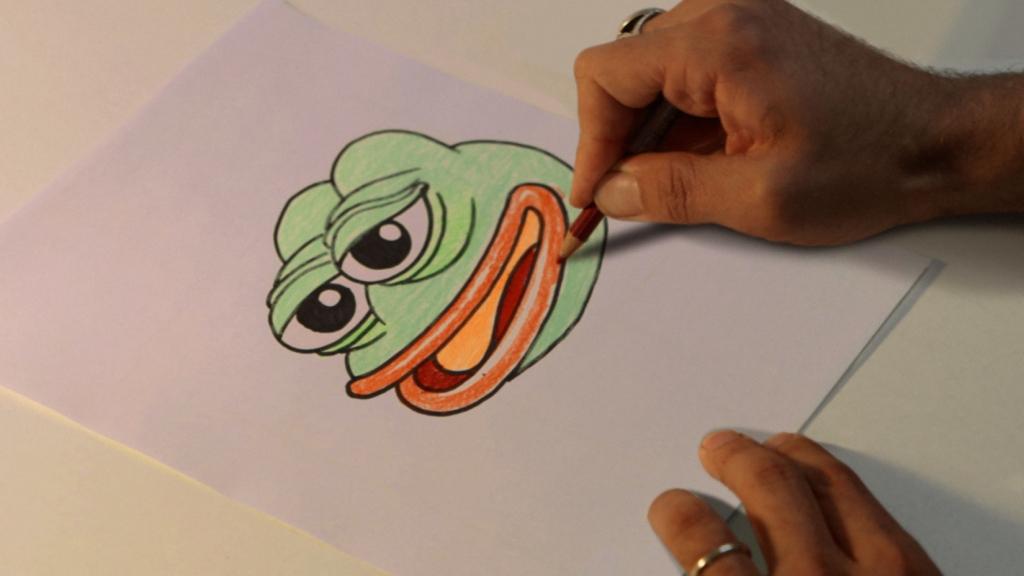 When Matt Furie uploaded a panel belonging to his comic in Myspace he wouldn’t have thought that in few years time, his humanoid frog character would officially be declared as a hate symbol (by the Anti-Defamation League). Feels Good Man may seem like a simple subject. It follows the transmogrification of Pepe. But the debutant Arthur Jones takes a fascinating deep dive into the culture that breeds shitposting and hatred. Hence, the virulent meme-form of Pepe the Frog offers a prismatic view on the discomforting developments of recent times.

Arthur Jones gets the tone perfectly right that his part-case study and part-cautionary tale never loses our attention. The chief antagonists of Feels Good Man, who initiated the evolution of Pepe, are the 4chaners, members of the popular, wholly-anonymous imageboard.  Launched before the social media became a thing, 4chan and its badge of anonymity opened the floodgates for an alienated generation of men. But as with any subcultures – real or digital – once the boundaries are set, silly culture wars began. Then they didn’t seem so silly. Bigotry, racism, vile misogyny and other toxic substances of internet sewage started to spill across the digital platform. Pepe was one of the infamous symbols, usurped initially by the internet culture, and bizarrely recontextualized into a meme associated with white supremacy.

Feels Good Man has a rollercoaster feel to it. It starts with the soft-spoken Matt Furie talking about his creation, and explaining the sort of humor he wanted to evoke from Boy’s Club. Arthur Jones slowly pushes us to the dizzying heights when all kinds of meaning are being attached to Pepe. The interviews of longtime 4chaners, ‘Pizza’ and ‘Mills’ provide a deeper insight into a world that might be alien to most of us. Memes, in a way, are like languages. It may sound gibberish only when you don’t comprehend it. As the former Trump campaign strategist Matt Braynard elucidates, meme materials can be made impactful by those tuning into its frequency.

In fact, it is the access to such interview subjects gives the feeling of the plunge of a roller-coaster. There’s a kind of situational irony in what the 4chaners say, or in that vignette involving cryptocurrency trader and PepeCash millionaire. But there’s guilelessness in the way they speak, and in what they believe that it’s hard not to be disturbed. Equally insightful are the soundbites of meme experts, analysts of online behavior, and Furie’s friends. The latter talk about the emotional impact on the artist as his favorite creation came back to haunt him.

The tragic mutation of Pepe the Frog is though one of the symptoms of a much-deeper internet-influenced behavioral malady, Feels Good Man could be the jumping-off point to discuss the current social and political degeneracy. In a world, where trolls are advised to ‘flood the zone with shit’, platitudinal remarks like ‘truth always wins’ just won’t work.  The documentary, however, ends on an uplifting note, bestowing upon us something to be hopeful about. Matt Furie sued the nauseatingly ridiculous Alex Jones, stopping his InfoWars to use Pepe. Furie has also started to enforce his copyrights to stop right-wing figures from peddling and profiting off Pepe.

Also Read: The Edge of Democracy Netflix [2019] Review – A Captivating and Sobering Account of Breakdown of Democracy

In the final sequences, Furie gains some control over Pepe and bestows some sort of redemption upon the humanoid frog character. On a broader positive note, Pepe the Frog has been miraculously adopted by the Hong Kong pro-democracy protestors. Like Matt Furie we too have a lot to do to light up this increasingly darker world. As Furie himself says towards the end of the documentary, “It’s like hell man! If you want to escape hell you can’t ignore it. You almost have to go to the center of it.”

Memes are an unavoidable part of the culture now.  In a way, it brings a kind of social inclusivity that’s embedded with lot of meaning. It triggers the innate creative drive of individuals too. However, with the emergence of weaponized memes, it’s not anymore a silly thing you just laugh at. At least couple of times in Feels Good Man, it is emphasized that the ‘the genie cannot be put back into the bottle’. Then again ignorance is only gonna make things worse. By the end, director Arthur Jones doesn’t exactly make us feel good, yet it’s an essential dive into the zeitgeist of our times.