Documentaries’ sole purpose isn’t to convey certain information or to educate the audience. It can artfully put us into the emotional, mind space of its subjects that the usual sociopolitical or journalistic perspective comes packaged amidst its dense layers. Documentarians nowadays without a voyeuristic gaze gracefully align themselves with one’s point of view, and through this microcosm macro-level issues are dealt with. It is cinema as activism but intertwined with the deeply human perspective. British-Palestinian filmmaker Saeed Taji Farouky’s Myanmar-set documentary, A Thousand Fires (2021) offers such strong social commentary by quietly observing the emotions and beliefs of a hard-working family.

Myanmar was once one of the largest exporters of rice, and agriculture is still the primary source of income for the nation’s rural population. But farming provides very little income that many set their eyes on becoming oil prospectors. However, it’s not a matter of striking oil and instantly getting rich. Myanmar has the largest unregulated oil fields, but several thousands of people live and work there, employing grueling manual techniques to extract oil. Since the oil fields are overcrowded and reserves have been nearly depleted, the drillers toil to collect a barrel a day or every few days. It’s still better than what they could earn in farming. 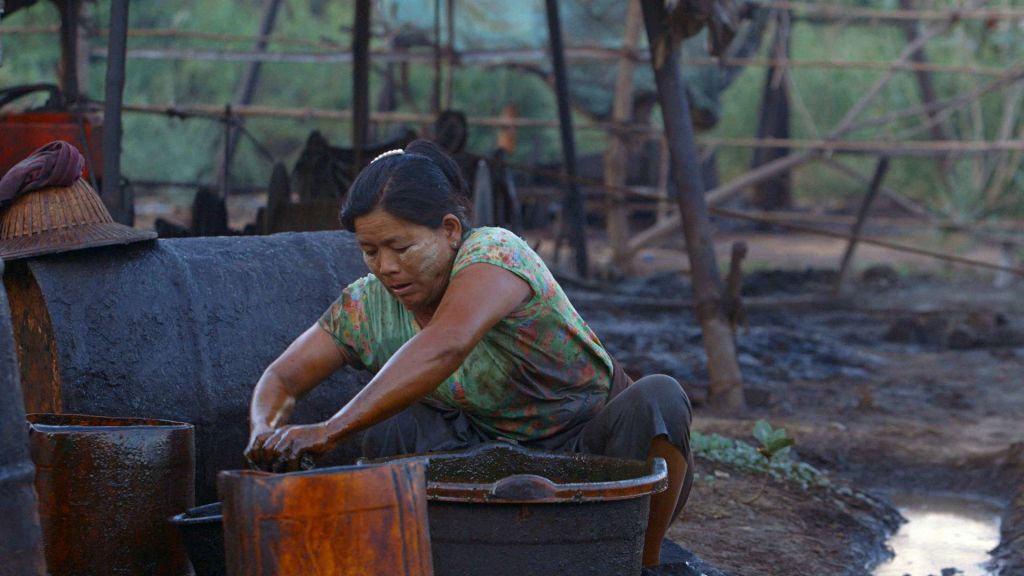 A Thousand Fires immerses us into this landscape of countless derricks and huts where the labor-intensive extraction process of the all-important viscous substance sustains their hope for a better future. The region of Magway is said to be one of the oldest oil industries in the world. The Ministry encourages the operation of hand-dug oil wells to create job opportunities as well as to ensure energy efficiency. The precarious methods used to extract date back to the 19th or 20th century – the era before oil drilling became heavily industrialized.

A Thousand Fires opens with the image of a flame, the basic energy essential to run the households. But it’s shot in a phenomenal way that it resembles a volcanic eruption. This visually brilliant close-up of a flame sets up Farouky’s intimate exploration of one family’s aspirations in the land of thousand fires. Thein Shwe and Hwte Tin, a husband, and wife who persevere in that pockmarked land for the future of their children are the protagonists of Farouky’s meticulously observed portrait. Farouky, who directed and shot this, alongside his sound designers & mixers guides us into this land that’s filled with the sounds of generators & engines. With the mud, dripping oil, and the grime that layers Thein Shwe’s body, the filmmaker gets us closer to his subject’s personal reality.

Fatima Dunn’s haunting score that crops up at certain intervals puts us in a mindset to ruminate on the emotional make-up of the family as well as the wider socio-economic context. Shwe and Tin’s teenage son Zin Ko Aung desires to escape the unstable life in the oil fields and become a footballer. Thein Shwe, though complains about his son’s reluctance to help him, agrees that sports are a ticket out of poverty. Since Aung is spotted as a prominent talent in the local matches, Shwe and Tin take him to a football academy in the city. The head coach asks the teenager to “cut all ties with his parents”. Dreaming of a better life for their children also means disintegration of the family. Farouky captures such hopes and fears of parents which is universal and irrespective of the socioeconomic background. 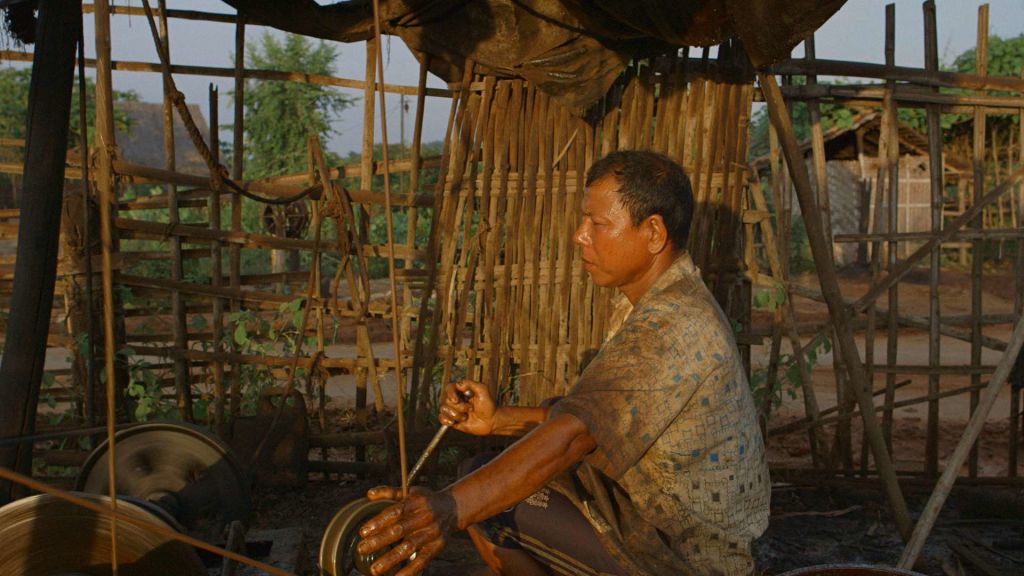 Shwe and Tin’s daughter visits her parents with her adorable infant daughter. Religion and superstition play a significant role in their lives. Fortune-tellers and religious rituals seem to offer them comfort as well as in some manner keep them contained. Earlier a fortune-teller tells Shwe not to be greedy, and further goes on to add, Tin is greedy because she’s a woman. The man also casually states, “No matter your intentions, honest people can only be found in the cemetery.” Later, we witness the intriguing ‘feed the dragon’ ritual. They also visit another fortune-teller who proclaims that a little change to their son’s name could bring him fame and wealth.

Farouky is neither offering any social commentary nor could his gaze be mistaken as judgmental. His idea is to make us connect with the mother and father despite our differences in terms of civilization or ideology. In fact, it’s tough to dismiss Shwe and Tin’s beliefs or faith, since it provides them comfort and keeps their aspirations alive. The physical and emotional toll of their reality is such that they deserve the forecast of an optimistic future.

Farouky dedicates A Thousand Fires to his own parents, which hints at the very personal connection he felt with Shwe and Tin. Though a foreigner to Myanmar, it is Farouky’s clear-eyed focus on the parents, gradually and organically captures the multiple layers existing within a family going through change. Apart from Farouky’s few years of slow and quiet observation, the editing is pitch-perfect to bring about a certain dramatic substance to their lives. Eventually, it’s a universal story about family and parenthood as well as a subtle discourse on the painful efforts of the unorganized working class to eke out a living.

A Thousand Fires was screened at 2021 Locarno Film Festival

Zero to Hero [2021]: 'NYAFF' review - A compassionate look at the Life of a Paralympic champion

The Sadness [2021]: 'Locarno' Review - An Interesting Gore Fest that Never Takes Off