Aadish Keluskar’s ‘Jaoon Kahaan Bata Ae Dil’ is a film set in spots that emanate romance, but it has no intention of evoking the fanciful emotion. Instead, it is relentlessly provocative. Driven mostly by dialogues between its two leads (Khushboo Upadhyay and Rohit Kokate), it guides us through a day of a middle class ‘urban’ couple. Keluskar takes us through the places synonymous with dating in Mumbai: the Marine Drive, the taxis, the cafes, the cinemas, the Juhu Beach and the hotels charging per hour. These are the places which exude deceptive, romantic security propagated by the mainstream movies and the director doesn’t miss a beat while indicting them of it.

We aren’t made aware of their names – they aren’t important, because these characters hit so close to home, they can substitute for multiple people we have known throughout our lives. What matters though, are their interactions and gestures, which acutely remind us that this isn’t a fanciful tale of two lovebirds, but one of two people in an alarmingly unbalanced relationship, where one of them takes a scathing approach to maintain his status quo as the dominant head. 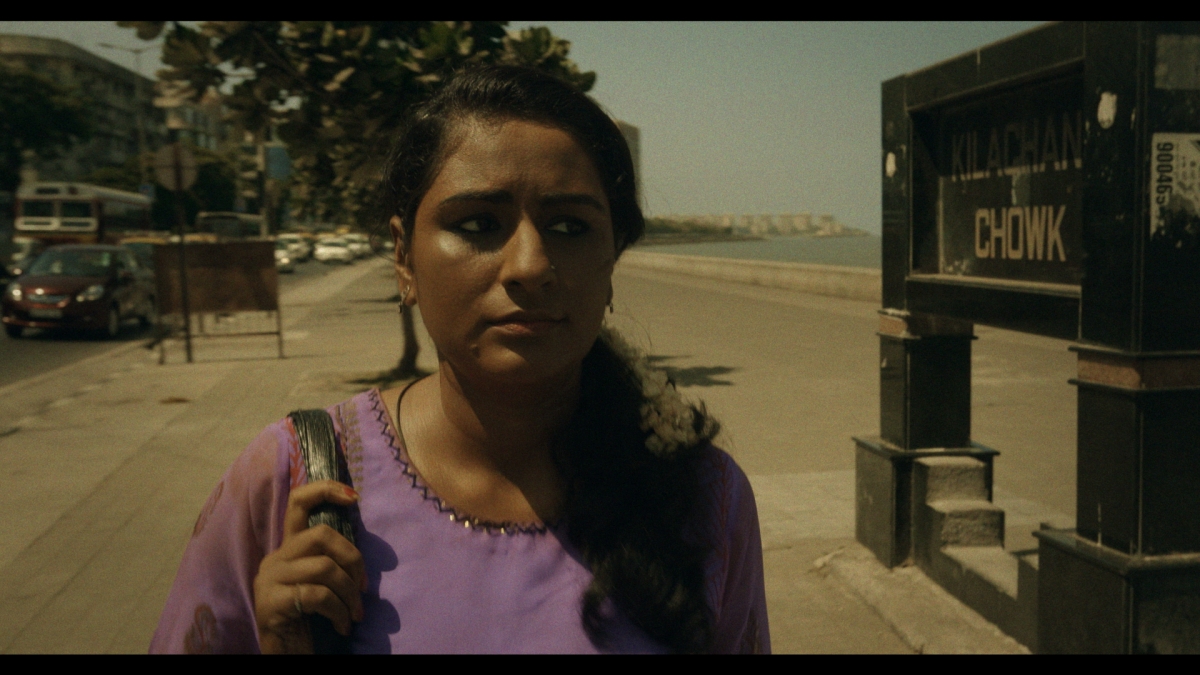 It is a revisiting occurrence; the seemingly rising tension between them dissipates right before moving onto the next scene. Keluskar does this religiously for the first 4 scenes – the talks escalate to a point where the woman points out something that bruises the male ego. We see his face in isolated close-up shots (the scene on marine drive employs a cut). It’s abrupt as if she formed a crack in the facade of his performative cynicism, but then he manipulates his way through, either by terrorizing or sweet-talking her, and we return to square one – the place where he can settle comfortably in this unsettling power dynamic.

Despite his ‘fuck the world’ attitude, it is the same one in which he thrives. As he admits in the first 10 minutes of the film, he gets a perverse glee out of people making people feel like fools. He rants about everything under the sun, the ‘serious’ matters, like politics and economy, and unabashedly expresses his opinions, factual errors, then gets away with it. It’s a kind of “devil may care” attitude, an astute privilege that he not just unconsciously recognizes, but also exercises. It is also the same world which renders her to do the more the taxing job of excusing his behavior, and to stick with him until pushed to a vicious breaking point of physical assault, the kind at which the world nods approvingly, and signals that it is ok for her to escape this hell.

The uncomfortable atmosphere of Jaoon Kahaan Bata Ae Dil is not created just by dialogues though, but through Amey V Chavan’s grasping cinematography as well. The film’s natural look and feel, which is achieved by the deliberate shakiness of the camera, often stays within the perimeter of the human eyesight, as a reminder that, while we remain passive observers to this discerning story, we remain actively silent to the daily lives which suffer through the same routine. The extreme close-ups, and jerky editing, both add to our further discomfort as viewers, as both Khushboo Upadhyay and Rohit Kokate perform dexterously onscreen. One person’s ‘jaanu’ is another’s nightmare; sometimes the same person has to face both. The lead actors keep up well with these contradicting characters in what must have been a hectic shooting period, what with all the single long takes.

Misogyny has never been a social ‘evil’. In a patriarchal society, it is a socially abetted program, one which knowingly allows the male lead to preach his pseudo-intellectualism with confidence. It also births the products of inflated male ego, casual sexism, and microaggressions. It excuses his sociopathic behavior under the garb of society approved progressiveness. It allows him to claim that he will beat up those who molest any girl but also to objectify and body shame his girlfriend in the same breath.

The progressively violent film climaxes in a strange scene where the female lead dances her heart out to the titular track for 4 whole minutes. The absurdity of that scene threw me off, and I wondered about its relevancy. Was it a catharsis, a release she never knew she needed? Or was it to welcome her unhinged heart, which was ready to run amok with its newfound freedom? It is rather fitting, I must say, for a film with a meditative question as its title, to leave the audience searching for answers.

Baahubali: A Mass of Clichés Cloaked Under The Label "Magnum Opus"