When there’s Saif, there is an inevitable charm. It’s a given, considering the comfort he has carved for himself playing uber-rich characters. Such characters have their lives so relaxed that their descriptions will hardly include high stakes. Take an example of Siddharth from Dil Chahta Hain, where the character is someone who merely ‘exists’, without much to lose. ‘Jawaani Jaaneman’ is a case just like that.

After trying out his acting chops in a variety of roles (the likes of Tanhaji, Laal Kaptaan, and Sacred Games), he returns to his comfort zone as an actor. The resulting performance oozes the required cool-old guy vibe that the film is unequivocally trying to achieve.

‘Jawaani Jaaneman’ is not exceptional with its narrative. It’s a father-daughter reunion story that is done in a bolywoodized formula of freshness. The similar song-and-dance sequences that show how these characters are ‘living’ their lives to the fullest, the ones that are so hard to distinguish from one another, they are present. So do the quirky element of jokes around sexual innuendo and the resulting laughs. Even some characters like the one played by Chunky Pandey (no recollection of the character’s name) serve merely this particular mood, which in general is overdone and largely forgettable.

And despite these contrivances, Jawaani Jaaneman manages to be a ‘nice’ film. The biggest asset for it is perhaps its self-awareness about the level of seriousness. While Saif’s middle-aged character – Jassi (Jazz) tries to bond with a daughter that he wasn’t remotely aware of for years, his character struggles with his freedom (and immaturity) that he had long endured and sustained.

Similar to Jawaani Jaaneman: 18 YEARS OF DIL CHAHTA HAI – A FILM THAT REWROTE THE RULES OF THE GAME

His character breaks when he can’t hook up with every other girl from the bar, and that is the saddest consequence for him. He isn’t melodramatically crying out with a sudden burst of emotions, because he is, after all, an old-aged man-child with very little awareness. Either that or he consciously tries to deflect to stay jawaan forever. The lack of a sense of responsibility reflects through his behavior but the film hardly takes precedence to make some ‘larger’ point. It stays with the characters till the very end, even while they were considerably half-baked or written with a paper-thin depth. 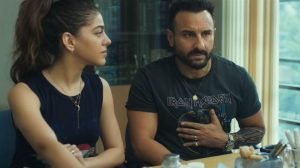 While Saif endows his expertise in a role he’s comfortable in, Alaya F fits very well along with him.  While making her debut, she gives a highly promising performance playing Jassi’s daughter. Her bubbly eyes capture just enough to reflect her father’s pathos while being the responsible one in their duo.

Even when the film tries to heighten its drama in its particularly flat scenes (while its chill vibes cannot hold the dramatic tension), her performance stays considerably adequate. The emotions as a result, even while don’t land that well in this unnecessary dramatization, her performance (apart from Saif’s) makes one compassionate. The human element stays alive largely because of their commitment to those scenes.

But beyond these two, none of the characters have lives of their own. They’re written just to counter the sides of these two leads, leaving one wanting more, especially from the Hippie mother played by Tabu. Yet I can’t dismiss the film entirely.

The reason is how ‘Jawaani Jaaneman’ successfully finds the pathos of a broken man who had long been shielded by the unawareness of any kind of responsibility. It conveys a recurring pattern in these privileged brats with their lack of selfless attitude. And it also showcases a female character who takes it on her own to keep finding ways to make a better life for herself. But while doing that, the film gets severely muddled with its compulsion to some idea of breeziness or funk and presenting it in a formulaic manner.

The result is a forgettable viewing with occasional shimmers of emotion. ‘Jawaani Jaaneman’ remains to be just another entertaining film like the ones coming out every week.