Home»Reviews»Films This Week»Jhund (2022) Review: A Realist And Transfixing Tale That Deserves To Be Seen Despite Its Contrived Tone
Films This Week/Reviews

Jhund (2022) Review: A Realist And Transfixing Tale That Deserves To Be Seen Despite Its Contrived Tone

Cinema has always been used as a tool for luring in massive audiences, often under the pretext of mass entertainment. Nagraj Manjule in “Jhund” reflects the tempestuous lives of the slum by adding in the sports angle- another event used to bring people closer together irrespective of their identities. In doing so, he upends the Bollywood sports biopic template and uses the game of football in order to tell a highly uplifting story.

“Jhund” cleverly places one of the biggest stars of Hindi cinema front and center, drawing grounded and inspiring characters around him. The character is loosely based upon the inspirational real-life story of the Nagpur-based Vijay Barse who founded Slum Soccer- an NGO doing stellar work with slum kids. In “Jhund”, a physical wall stands between the deprived but dauntless youngsters of the slum and a lavish playground on a sprawling college campus adjoining their bustee. One of them (Rinku Rajguru), endures Kafkaesque-level struggles to procure a passport at a crucial point in the film. On her way, she crosses aboard, only for the camera to linger on it for a few extra seconds as it reads: “Digital India”.

“Jhund” is littered with such moments of deliberate camera blocking as it juxtaposes its characters every once in a while to create these stark contrasts. Through the use of visual storytelling, Nagraj debunks some pernicious misconceptions people often carry, ignorant of the harsh reality (the fight against life on a daily basis as noted by Mr. Bachchan’s Vijay in the film) a lot of people face on the other side of the wall. The film, which uses both professional and non-professional actors, has plenty of interesting characters that don’t let you get bored in its otherwise lengthy 3-hour runtime. 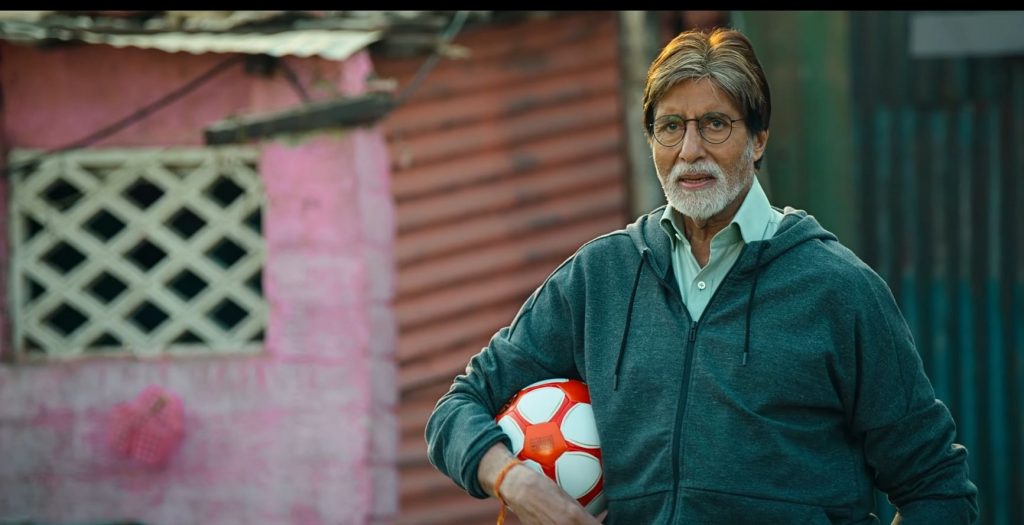 Ajay-Atul’s beats add necessary vigor into the narrative in order to amplify the rich sociopolitical context the film sets up so well within its first act. Babasaheb Ambedkar’s posters proliferate in a vigorous dance sequence set midway through the film, adding further chemistry to the lead of kids shown. I honestly did not know what path the film was going to choose after spending so much time confined to the slums in its first half. Then, the film shifts from a mainstream narrative to a more experimental docu-fiction approach. I understand that not every film needs to be a grand storytelling epic that needs to go a certain route; I was willing to go with the bold leap the film had made through that choice.

What bugged me, however, was that “Jhund” never really embraces or event hints at that realistic approach till its second half, leaving its characters confused in whether they wanted to be a part of a larger-than-life narrative, or become proponents of solely fighting for a social cause. The direction always feels tactile, yet it doesn’t always interweave its themes well upon each other. An airplane is crosscut with a flying soccer ball mid-air; the camerawork by Sudhakar Reddy Yakkanti is a sight to behold, bolstered by the gut-thumping background score by Saket Kanetkar. The movie also has two supportive yet prominent female characters- Razia and Monika, whose plights and identity make them chip away at deeply ingrained prejudice in order to wrest their place under the sun.

Even when “Jhund” goes overboard with its use of visual metaphors, it grounds itself in an aching realism that makes us contemplate a whole ‘different’ India. It cleverly highlights the thin line separating what it’s like telling a story of the people living in the slums, versus telling a story about them. I did draw the inevitable comparisons with “Slumdog Millionaire” and “Salaam Bombay!”. Later, I also thought about what makes us appreciate those films better and not show up for such essential homegrown social films during the time of their release. Ankush aka ‘Don’ Masram is played by a remarkable aplomb Ankush Gedam here, who has been driven over the precipice by constant humiliation all his life. It’s his character arc at the end of the film, set around an airport, that forms the beating heart of “Jhund”.

I couldn’t help but think of an interview I saw a few years back where Shafiq Syed, the guy who had played the lead kid in “Salaam Bombay!” had admitted how sadly similar his life had become to the reality of the 1988 film. 34 years later, I could only hope that a similar plight doesn’t strike the cast of this film. “Jhund” is the kind of film that needs to be supported; one that deserves to be made tax-free by state governments across the country.

Rudra: The Edge of Darkness (Season 1) 'Hotstar' Review - A frame by frame remake that works better for those unfamiliar with the original

Jhund (2022) Review: A Realist And Transfixing Tale That Deserves To Be Seen Despite Its Contrived Tone