The movement and transition achieved in Yudhajit Basu’s short documentary Kalsubai occur in nimble ways. The voice of a woman (Jyoti Subhash) wafts over geological formations, which seamlessly morphs into the likes of mangrove, and ultimately assumes the appearance of figures engraved into rock outcrops. We see shadows of wind turbine’s arms on the grass, in differing degrees of frequency and speed. Wide shots of formidable canopies curling into each other gradually reveals a dwelling in its bosom, and a path cutting through the landscape, in the frame’s bottom.

The history of how the place came to be is laid out in linear terms- the sea receding, retrieval of land for habitation, the age of the first man and woman. Large histories are then compressed into the more individual journey and anecdote, initiating the viewer to the myth on which the goddess of the mountain range, Kalsubai, rests.

Sticking to a rounded square format, Basu introduces us to the goddess lore using various frameworks at his disposal. The very first encounter we have with is through the women of the village of Bari, and their relationship with the goddess, which is presented as a reverence guided never by fear. Prior to her, the locals worshipped a leopard god who inspired terror among them. The goddess exudes a protective, nurturing presence, couched in maternal love and inclusivity of marginalized women.

The narrative is rooted in feminist resistance and assertion. The goddess, who had first appeared as a girl, told a couple she was willing to be their daughter if they let her work, instead of marrying her off or coercing her to clean utensils. Patriarchy does not honor and remembers the wishes of women. After a while, they presented her with suitors and thrust cleaning duties onto her. She refused to toe in and went back to the mountains. She wouldn’t allow herself to be subsumed into the usual rites of housework relegated to women and defied the traditional route of normative female realities and circumstances. This very spirit of compassion for the couple she had demonstrated, her generosity to be their daughter when they had none, nevertheless coupled with the mettle to challenge structures of benign-faced domination is what is distilled into the consciousness and the ways of living for the women of Bari. 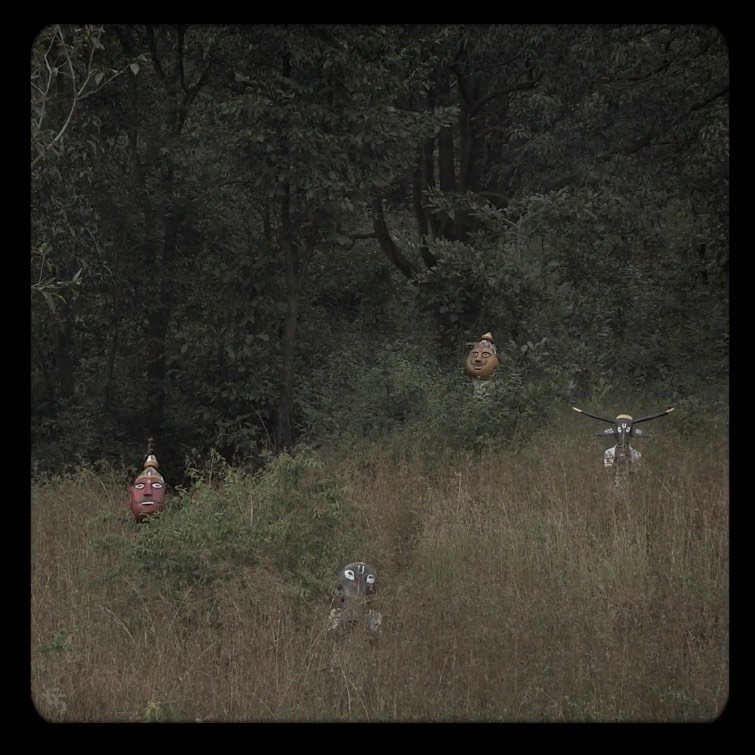 The chants of the women as they dance around a fire allude the goddess reserves her special graces for childless women or those who can’t bear one. The ethnographic investigation of the documentary, therefore, is stretched into a subdued study of a community’s consciousness and what constitutes the crux of its thought designs. How do histories become condensed into what we try abiding by in the everyday acts of our lives?

Basu eases us into this community and its ethos with a patient eye and ear towards various spheres and layers. With a narration guiding us, we begin on a religious plane, moving towards witnessing the holistic history being chronicled over shifting surfaces, winding into very specific statements of unstinting self-belief and the capacity for more expansive forms of love, that forms the moral essence or fiber of the residents. The juxtaposition may be slightly heavy-handed to the more well-versed viewer of the common ethnographic film, but it is effective.

As we listen to a story of an iconoclast reach its crest in the laying of definite conditions to the men, the shots are of women engaged in domestic chores: weaving floral arrangements, picking the grains for chaff, the busy oven; the women silently hurrying from one task to the next. The moment of opposition in the narration is contrasted with unbroken shots of a girl fully at peace in herself among flowers. Conflict and serenity in two realms collide gently.

Similar to Kalsubai – Iraivi [2016]: In the shadow of arrogant men!

There is also a sense of mischief and playfulness in the visual strategies. The image of ritual props being clasped by kids positioned apart at various corners of a field has a kind of oneiric touch to it. Basu teases a common visual impression of village kids and adds an element of inscrutability, articulating a sense of being hopelessly bound to fixed markers of identity, inescapably constrained to one’s misinformed understanding.

Basu’s camera stays at a distant remove. It’s a space captured with curious, dignified introspection. The building of the viewer’s induction into space happens on multi-tiered levels. The approach to the Mahadeo Koli tribe of the Konkan region is decisively nuanced. Basu ascribes a certain remoteness in the construct of the tribal community, disconcerting traditional paradigms of representation. Their customs, beliefs, and practices are conveyed with a fair dollop of underlying implicit gender politics that the Koli women struggle to get past in different ways. 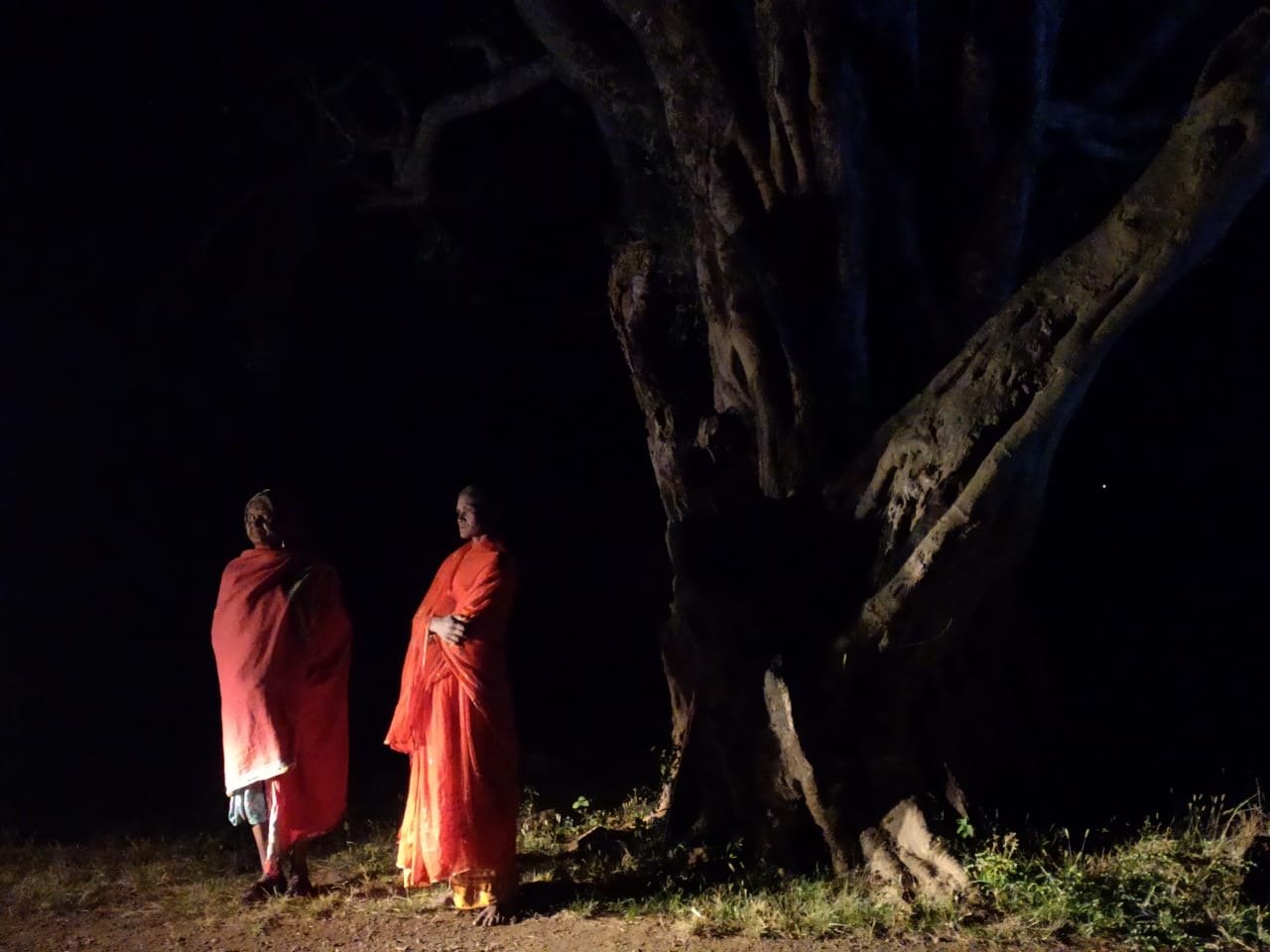 For most of the length, the film is shorn of elderly male figures. We watch the kids scamper around in leisure and across fields. The only time we sight an older man is when he climbs the roof to affix a lightbulb. He is framed in a long shot. Whereas, Basu lets us in on more considerable proximity to the women, shot in an array of full and medium shots. In the mundane, Basu finds some evocative, instantly distinctive frames of women engaged in domesticity, pecking hens scurrying about, low-lit emptied rooms with piles of clothes dangling nearby, portraits of the village settlements with billowing smoke enveloping half of its entirety.

The visual rendition of the Koli village is one of modest austerity, isolated and cocooned in a self-sustaining way. Utsav Ghosh composes a sound design comprising mostly ambient sounds of an overwhelming insect buzz that permeates the film, accompanied with the infrequent jangling of bells, the rustling of stalks, and all usual natural elements.

The muted powers of a consummate film are richly realized in Kalsubai because the direction, Gourab Mullick’s mindful editing, and the verbose but scrupulously worded narration work in wondrous consonance. There is no dissonance among the three, and the recurring subtly enchanting touch to the transitions between frames or from black and white to color, bolster the merit to acute technical engagements of the crew. Kalsubai teems with a certain formal rigor and exactitude in its observational bandwidth. You will take some time to warm up to the film’s methods and being, but the certitude in the filmmaker’s gaze, the absence of any muddled tangents, the warm confidence with which he surveys the place and its people, will make you stay the course.

KALSUBAI produced by Film and Television Institute of India (FTII) Pune has won Special Mention of the Ecumenical Online Jury in the First International Online Competition at Oberhausen and also the Grand Online Prize of the City of Oberhausen, Germany. It is also a selection at the prestigious Sheffield Docu Fest 2021.