Valley of the Dead (2020) Movie Ending Explained: Netflix’s latest offering, ‘Valley of the Dead,’ a.k.a Malnazidos is a Spanish zombie action movie that was supposed to get a theatrical release in early 2021 but got pushed back to this year owing to the pandemic. The film is directed by Javier Ruiz Caldera and Alberto de Toro. It stars Miki Esparbé, Aura Garrido, Luis Callejo and Álvaro Cervantes amongst a host of others. With a hefty dose of humor and quite a few likable characters, it’s a fun film despite its somewhat formulaic plot and doesn’t overstay its welcome. It’s the kind of film you wouldn’t be surprised to see Tarantino list as one of his favorites at the end of the year.

Captain Jan Lozano, a member of the Francoist Fifth Brigade and a former corporate lawyer, is brash and reckless. His uncle commands the brigade that is based in Las Aguilas and includes SS soldiers and their captain in their ranks. Jan’s brother is a Republican who has cut ties with the family, and he himself has been saving a number of Republicans in trials. After his uncle saves him from the firing squad for having attacked a judge who is ‘almost Franco’s cousin’, Jan is asked to undertake an almost suicide mission to prove that he’s a good soldier and, therefore, a valuable asset who shouldn’t be punished for treason. He is to take a secret message to the Sixth Brigade, behind the ‘buffer zone’ and, therefore, dangerous territory to venture out into. Since he cannot drive, he will be driven by Private Delacruz, a 17-year-old soldier who was saved by Jan from charges of cowardice and desertion.

They stop to save an Italian pilot who parachuted out of his destroyed aircraft as they’re on their way. They realize he’s dead but he is immediately arrested by a group of Republicans. This group is led by a Sergeant and has members like Matacuras (‘Priest-Killer’), Brodsky, a Russian, and Mecha, a former motorbike racer, among others. They discover the letter on his person, and it turns out to be a joke which has the words’ War is won by nutting up’ written on it. Clearly, it was not a secret message but was devised by his uncle to put Jan in a dangerous situation and see if he’s capable of saving himself. But suddenly, the dead pilot comes to life before he’s killed by the Republicans, and the group realizes that it’s facing a novel danger, which is zombies. Anyone who’s bitten by one turns into one while they’re alive, and if they’re killed before the infection spreads, they come back to life. The Republicans don’t kill Jan and Decruz but take them in their custody as they slowly discover how trapped they are and are forced to form an uneasy alliance with the two of them.

The ragtag group is constantly fighting amongst themselves, owing to their ideological differences. On coming across Sister Flor, Rafir, and Jurel, three more Francoists trapped in a hut, the group expands, and so do their conflicts. While waiting in the hut, Jan discovers that the letter he was supposed to deliver has a map on it made with invisible ink. After they escape another zombie assault, Jan shows it to the group. The map shows the movement of the zombies in the area, and a point is marked with X, which is where everyone decides to go, for that is possibly where the plague started. They reach the town, which is seemingly abandoned, and discover an injured bride who’s hiding. They take refuge in the town church, which turns out to be a deserted laboratory. 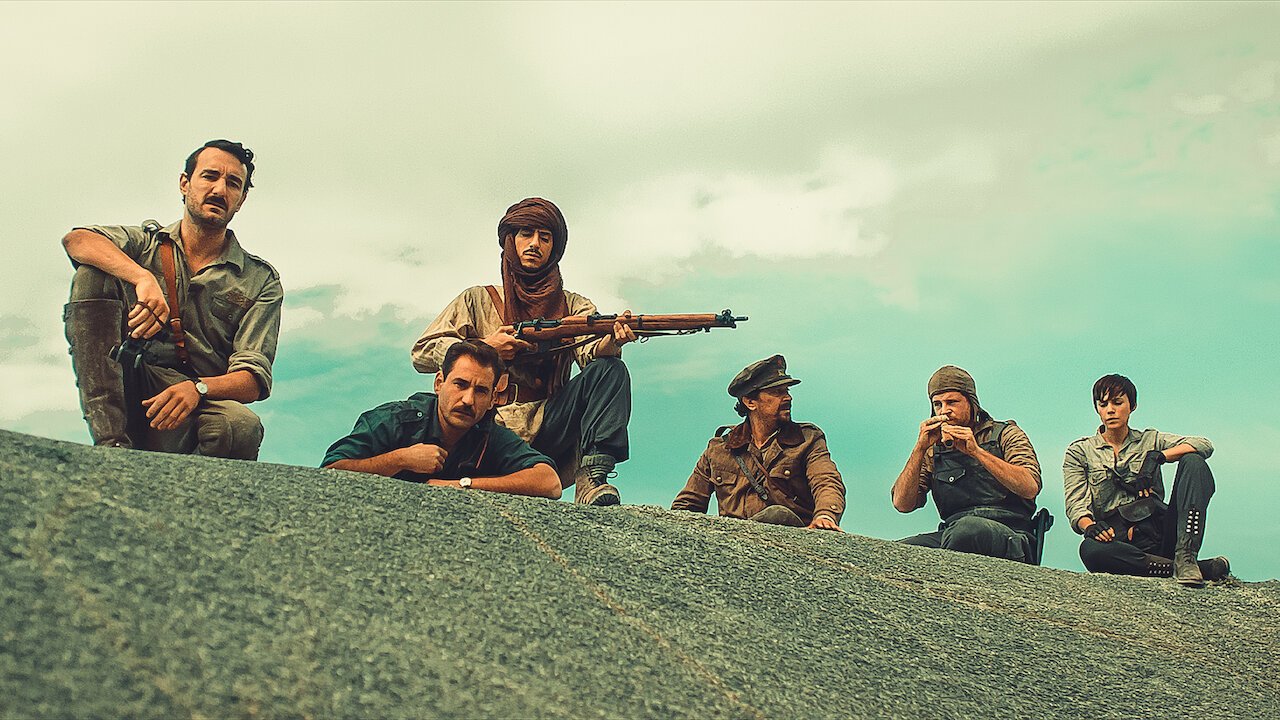 The bride retells what was shown in the opening of the film and adds her own experiences to it. On her wedding day, an SS company, led by the captain who’s in the Fifth Brigade, arrived in their town and shot down the entire wedding party. Only she survived. They released a blue toxin in the air, after which some soldiers set up camp inside the church. The dead people in the town started turning into zombies that the soldiers began using for experimentation before it all got out of hand, and everyone became a zombie. In the midst of this, Jaime, a fanatical Republican, finds papers containing the process by which the toxin is produced and tries to escape in order to use it to his side’s advantage against the Francoists. He is killed by the zombies, and during the group’s escape in the ensuing fight, Sister Flor stays behind as she had been bitten.

After escaping the town in a truck Decruz repaired, Jan explains to everyone that he believes a mysterious railcar in Las Aguilas is where the toxin is produced, and there must be an antidote. Therefore, they should attack the place and stop the toxin from getting transported and spreading all over the country. Everyone agrees to the plan, and the Sergeant makes Jan promise to keep his team alive even if he is executed.

At Las Aguilas, Jan finds out that his uncle is perfectly aware of the toxin and the zombies, stating that the Russians have a similar weapon and, therefore, it’s to be used as a deterrent against them. Jan refuses to enter the camp without the others and leaves. The SS captain shoots Jan’s uncle after the former plans to delay an aerial bombardment of the area in an attempt to give Jan time to escape. Delacruz had been bitten while trying to recover the truck back in the town and willingly sacrificed himself to open the door to the Las Aguilas Brigade.

Inside, the climactic battle ensues. Most of the group is killed or sacrifices themselves throughout it. The Sergeant takes control of the engine and starts driving the train that has the toxin laboratory in it. Inside, the SS captain reveals to Jan and Matacuras that no antidote exists even though the Nazis tried to create one. He injects himself with the toxin, at which point Matacuras kills him instantly. A zombie bites Jan’s hand, so Matacuras chops his hand off to stop the infection from spreading. As she and Jan confess their feelings towards each other, the aerial bombardment happens, killing all the zombies. In the aftermath of the bombardment, Rafir survives, as do Jan and Matacuras, because they had locked themselves inside an impenetrable box to protect themselves from the zombies. Matacuras drops Jan off in his village, and they go their separate ways as she doesn’t believe that two people with such differing ideologies would be able to coexist.

The valley was to be bombed by the airforce to clear the zombies from it, after which the Nazis and Francoists were going to move to another region where they’d infect the local populace. This was meant to clear those areas of the Republican soldiers operating there, justifying the creation of the toxin as a severe measure in winning the Civil War. It exposes the brutality of the Francoists and continues in the vein of speculative fiction about clandestine Nazi experiments and inventions. If the mid-credit scene is meant to set up a sequel, the SS captain will surely return with another evil plan, possibly even more monstrous.

Valley of the Dead (Malnazidos) Trailer

Where to watch Valley of the Dead