KGF Chapter 1 is not an easy watch. It is packed wall-to-wall with lore about the Kolar Gold Fields. There’s so much violence that blood almost spills out the screen. There’s romance. There’s history, with the narrative constantly shifting between the past and present. And at its center is the emotionally-charged and ambitious story about the rise and rise of Rocky (Yash). But all this is borderline stabbed in the back by its neurotic editing that doesn’t let you savor the brilliant production design, action, and of course, the performances. So, the only fear while going into KGF Chapter 2 wasn’t whether or not it’s going to tell a solid story and bring the audience to their feet with cheer-worthy moments. The fear was regarding the editing. And after watching the movie, it’s safe to say that Prashant Neel has listened to the criticisms and the visual storytelling is very much on point.

Written and directed by Neel, KGF Chapter 2 opens with a young Rocky (Anmol Vijay) talking to his mother Shanthamma (Archana Jois) about the ocean and why it sparkles so much. Rocky’s mother says that it’s because the ocean is filled with treasures and gold. Rocky promises to bring her mother all the gold in the world since she likes it so much, which is some tragic foreshadowing for what unfolds in the movie. The narrative then shifts to the present where Anand Ingalagi (Anant Nag), the narrator of the first film suffers from a heart attack and his son, Vijayendra (Prakash Raj) reluctantly steps in to tell the rest because Rocky’s story matters to Anand the most. And on that note, Rocky re-enters the plot to tell all the partners in charge of running the gold mining and supplying business around KGF who is running the show now that Garuda (Ramachandra Raju) is dead. When Rocky returns to KGF, it’s established that he has brought some semblance of freedom. And as he works to expand his business, his enemies begin planning how to take him down.

Now, that’s not even 5% of the plot of KGF Chapter 2. There is so much more going on, a lot of which are payoffs to subplots set up in Chapter 1. Two of the biggest and most relevant ones are Adheera (Sanjay Dutt) and PM Ramika Sen (Raveena Tandon). The overarching narrative is still largely about Rocky trying everything in his power to maintain his stronghold on KGF and fulfilling the promise he made to his mother. And all of it mostly works like a well-oiled machine all throughout its 168-minute runtime. Adheera proves to be a worthy adversary to Rocky as his Viking-inspired ruthlessness knows no bounds. There are moments where it genuinely feels that Rocky is going to buckle and that’s enough to give their rivalry the necessary punch. Both Adheera (whose violent past has been soaked into KGF’s walls) and Rocky (whose prowess is still fresh in everyone’s minds) want to possess KGF, which gives their enmity a personal touch. So, naturally, their eventual fiery clash feels cathartic and, to be honest, necessary.

The problems arise with the romantic subplot with Reena (Srinidhi Shetty) and when Neel tries to pose Ramika Sen as the other big bad of the film. Without giving away too much, Reena is there to give Rocky some last-minute motivation and anyone who says otherwise is lying. They were barely together in Chapter 1 to establish any chemistry. The same can be said about their relationship in the first half, which already begins on a problematic note and then goes nowhere. The people of KGF educate how god-like Rocky is to probably make her fall in love with him. But there aren’t any meaningful interactions between them to cement. Then in the second half, the two randomly break into a song-and-dance sequence, forcing you to go “WTF?” out loud. As for Ramika, her inclusion serves as a commentary on the invasive nature of political figures and how overpowered they are as compared to someone like Rocky. However, unlike Adheera, a lack of connection with KGF makes her rivalry with Rocky feel disjointed. Maybe teaching Rocky the legal ramifications of his actions should’ve been reserved for a sequel? 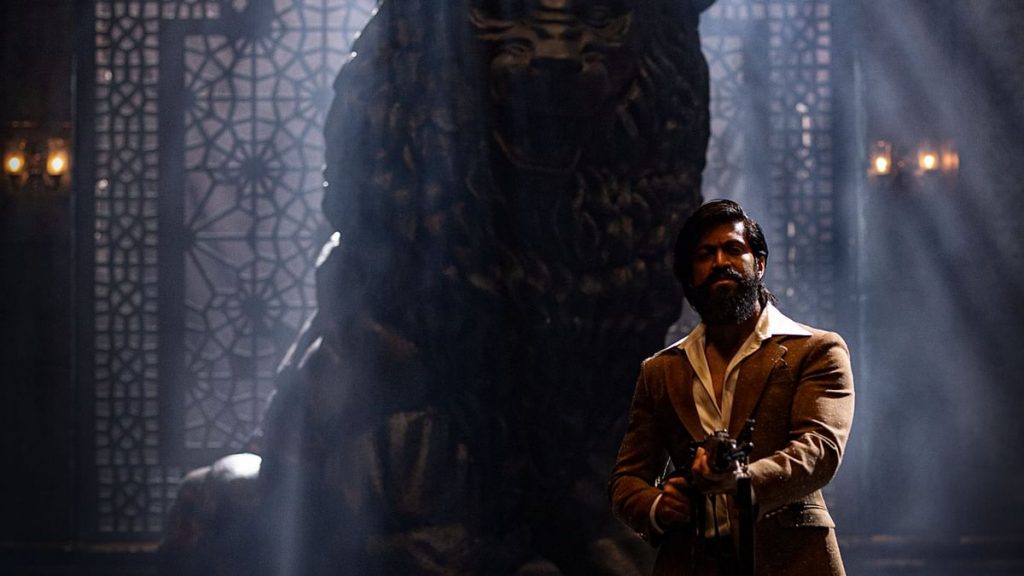 All that said, the aforementioned points will likely appear as minor or negligible gripes for the wider audience since everything else around it is going to dazzle and shake them in the best ways possible. Last month, S.S. Rajamouli’s RRR (2022) set the benchmark for character introductions with Alluri Sitarama Raju (Ram Charan) and Komaram Bheem’s (N.T. Rama Rao Jr.) entries. This month, Prashant Neel matches up to it (and probably even clears said benchmark) with Rocky’s entry. It’s grand, loud, and absolutely adrenaline-pumping. From Bhuvan Gowda’s cinematography to Ujwal Kulkarni’s editing, Ravi Basrur’s music, the production design, art design, and the visual effects come together to encapsulate Rocky’s accomplishment. From that point onwards, Neel maintains a surprising balance between employing restraint (in terms of overusing multiple camera angles and then cutting between them) and applying maximalism to let the audience absorb every perfectly color-graded, intricately designed, and gorgeously lit frame of KGF Chapter 2. Additionally, the make-up and costume design departments deserve a big round of applause for their work. All the suits that Rocky wears should be sold as official merchandise and it will fly off the shelves.

The action scenes are still an issue though. A car chase is edited like a movie trailer within the movie itself. The fight sequences that follow have a ton of slow-motion shots to give an idea of what’s going on. But you never really get to see what’s happening. You are only allowed to see the result in its entirety. It’s apparent that a lot has gone into making those fist-to-fist fights or shoot-em-up scenes and you see that the actors are doing their part. So, why make it indecipherable? The only time it actually works is when Rocky shoots up a police station (it was in the teaser and hence, not a spoiler). Every time any character in any movie gives the police a dose of their own medicine, it feels wholesome since the police’s brutality has been glorified in movies for so long. However, the tangible nature of KGF Chapter 2 takes the same to the next level. The intercutting between Rocky loading and reloading the gun and the police screaming at the top of their voices is so raw that you can feel your blood pressure going up by a few notches.

That brings us to the acting. Rocking Star Yash totally deserves the moniker of “rocking star”. From the first frame to the last, Yash has such an electrifying screen presence that you can’t help yourself from admiring him. I can’t say much about the vocal inflections (because the original Kannada version isn’t available in most of India, which is just sad) but all the physical acting that he does with his physique, his eyes, and his hair (which is a character in its own right) is commendable. When an actor is capable of expressing so much despite being mostly stoic, you know that he’s good, and Yash is good. Sanjay Dutt knocks it out of the park. He really sells Adheera’s wounded-tiger vibe and legitimately seems like he has walked out of an occult horror movie. He gives it his all and the result is there for all to see. Raveena Tandon is fine. Prakash Raj should narrate every movie ever. He is that amazing of an orator. But, if we are being honest, everyone from Achyuth Kumar to B.S. Avinash, Easwari Rao, Ayyappa P. Sharma, Harish Rai, Dinesh Mangaluru, and those who appear on-screen for even one millisecond of a reaction shot deliver exceptional performances.

In conclusion, KGF Chapter 2 should be watched on the big screen at least once (if it’s safe to go to the theater, of course) to experience the staggering canvas on which Prashanth Neel has told Rocky’s story. The iconography (there’s a surprising amount of sickle and hammer imagery and if you know what it means, you know), the music, the acting, the horror (there’s so much blood that you’ll think the screen looks sticky), and the emotions deserve to be viewed up close. But it should also be watched, especially because of the communally charged climate we are being forced to live in right now, is to see how the movie portrays mutual respect between communities of varying religious beliefs and frames its characters who unapologetically wear their religious markers on their sleeves (the sleeves are metaphorical here, not the religious markers). That is not much but it’s more than an overrated film industry in the North is doing and it’s an education on the importance of equity and equality. And it’s also about Rocky doing the coolest things possible in an even cooler fashion, but you get my point.

KGF Chapter 2 is currently in theaters.

Room 203 [2022] Review: A Gripping Tale that Ebbs and Flows between being a Teenage Drama and a Thrilling Horror Movie