Knocking, which premiered at the Midnight Section at this year’s Sundance Film Festival, does not really live up to its predecessors, notably ‘The Babadook‘ and ‘Hereditary’. Frida Kempff’s debut trails around the common ground of a woman under the influence, wronged by a society dominated by men. Yet, it remains shy of its formal narrative underpinnings and never really takes off.

Knocking follows Molly (a knockout performance from Cecilia Milocco), who has just been discharged from the psychiatric ward after the death of her girlfriend. The film opens with perhaps the only peaceful sequence on the fated day. It then cuts back to Molly returning back to her new apartment, all by herself. Painfully aware that the world has moved ahead, she leans back in the new space and tries to regain herself anew. The humid weather does not help. On the sidewalk, she steps over a frog. Then there is a little bird whose presence soothes Molly initially, but not for long. Just as she guards herself to better things, she hears a strange knocking sound from the ceiling. It follows her every day, and soon enough Molly realizes that the knocking is from a woman trapped above. She is seeking help in those knocking sounds, or so Molly thinks. 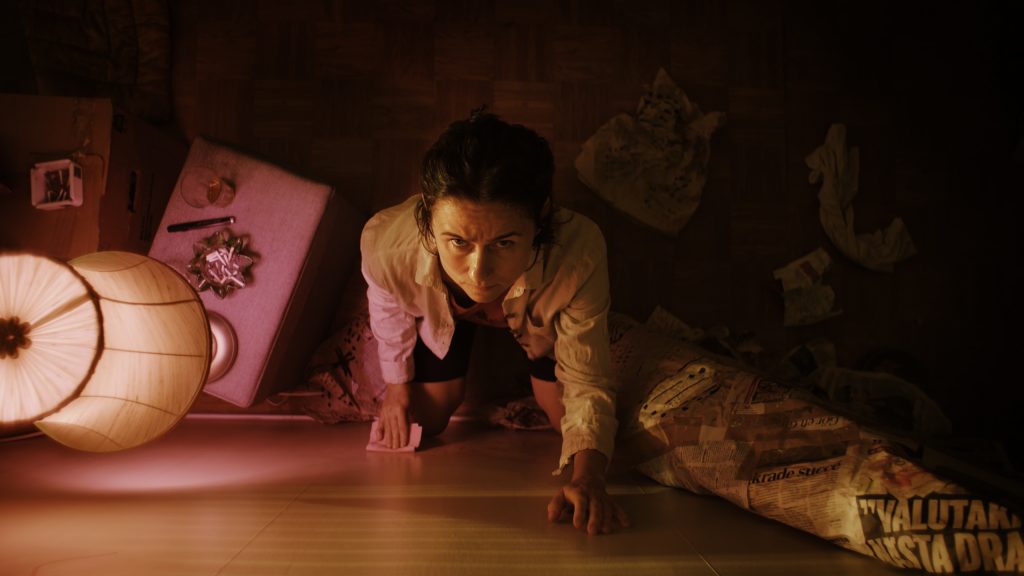 Is it just her hallucination? Has she recovered from her trauma yet? The tenant above shrugs her off saying there is no such woman nor sound that is discernible. But the knocking sounds persist, and Molly even hears sobbing sounds. She learns code language and tries to unlock what the sounds mean. Erstwhile, she keeps a close eye on her neighbors (all mean, of course). The emergency number blocks her number for repeated fake alarms. Constantly gaslighted, Molly’s despair reaches dangerous heights when she chooses to prove that what she is hearing is real and not a part of her imagination. As the knocks and cries become more and more audible, Molly begins to unravel.

Working with a script by Emma Broström, which is in turn adapted from Johan Theorin’s novel, Kempff takes her time to establish her leading lady for disintegration. The slow burn works in most parts, if not pulled back by the brisk pulling of the narrative threads that result in a climax that does not live up to its material. In cinematographer Hannes Krantz’s lens, Knocking establishes an atmospheric tension that combines claustrophobia to brilliant effect. The minimal production design works for the visual language yet stays short of fully daring to go into places with Molly. This is where Knocking falls short of greatness. It stays within the periphery of its formal regularity with extreme close-ups and never really takes off with her. It is impossible not to feel that at 78 minutes, Knocking is stretched from what could have essentially been a short film of its own accord. The climax, when it arrives, rounds off neatly, culminating in a clumsy feature that is not eager to open its doors to miscalculations.

With a diminutive structure that threatens to burst open its hinges, Milocco’s Molly instantly reminds the viewer of a suburban Hitchcock heroine, unable to fathom the crisis that surrounds her. Milocco does not miss a single beat in registering the hurt, doubt, pain, and rage that permeates Molly at times, sometimes all at once. She holds the proceedings together even as she begins to fall apart. Her Molly is present in every scene, and her descent into hysteria allows a lot of sympathy and consideration for a woman who is constantly made conscious of her shortcomings. Milocoo’s Molly is a specific creation, one that might be inspired by the likes of Gena Rowlands and Mia Farrow, but still navigates in a path with complete agency and control.

Apart from Milocco, little can be said about the supporting characters. Even if they are seen through Molly, the men are practically indistinguishable. If that’s a point, then there’s nothing to bring that home. Kemoff’s debut could have been a different creature altogether if she had believed in her leading lady more than the formal underpinnings of the screenplay in such forgivable fashion. Cecilia Milocco‘s full-bodied performance is reason enough to catch Knocking, which might feel strangely relatable in a post-pandemic era: who hasn’t wanted to leave their apartment and live free again?