Bengali filmmaker Abhiroop Basu’s short film ‘Laali‘ features the ever so dependable Pankaj Tripathi. The seasoned actor has proven his metal in both independent and mainstream cinema in the past few years. So much so that his name is enough for someone to seek out a film even when it stars him as a lonely laundry worker. Basu’s sophomore short film ‘Laali’ is a quiet, understated, and quirky tale about loneliness.

Without many words, the filmmaker manages to inexplicably trace the world of our unnamed protagonist. As the film begins, we find ourselves somewhere in the suburbs of Kolkata. However, the viewer is aware that the protagonist wasn’t born here. The middle-aged man is seen ironing clothes as he stumbles on to a red dress that seems out of place for a bundle full of men garments from a nearby boys hostel. The man nonetheless goes on with his routine work before closing off the shop. This seems like a quotidian cycle that ends with a nightcap of local alcohol. You don’t judge him though, a man needs his vices – especially when it’s only the sound of music that is there to accompany him till he dozes off.

This day brings a new light to him, though. The red dress doesn’t just come with its own sense of nostalgia for him but also becomes a companion of sorts for the lonely man who is not just suffering from recurring neck problems but also from the lack of ’embrace’ and ‘love’ that his Bollywood songs so often tell him about. 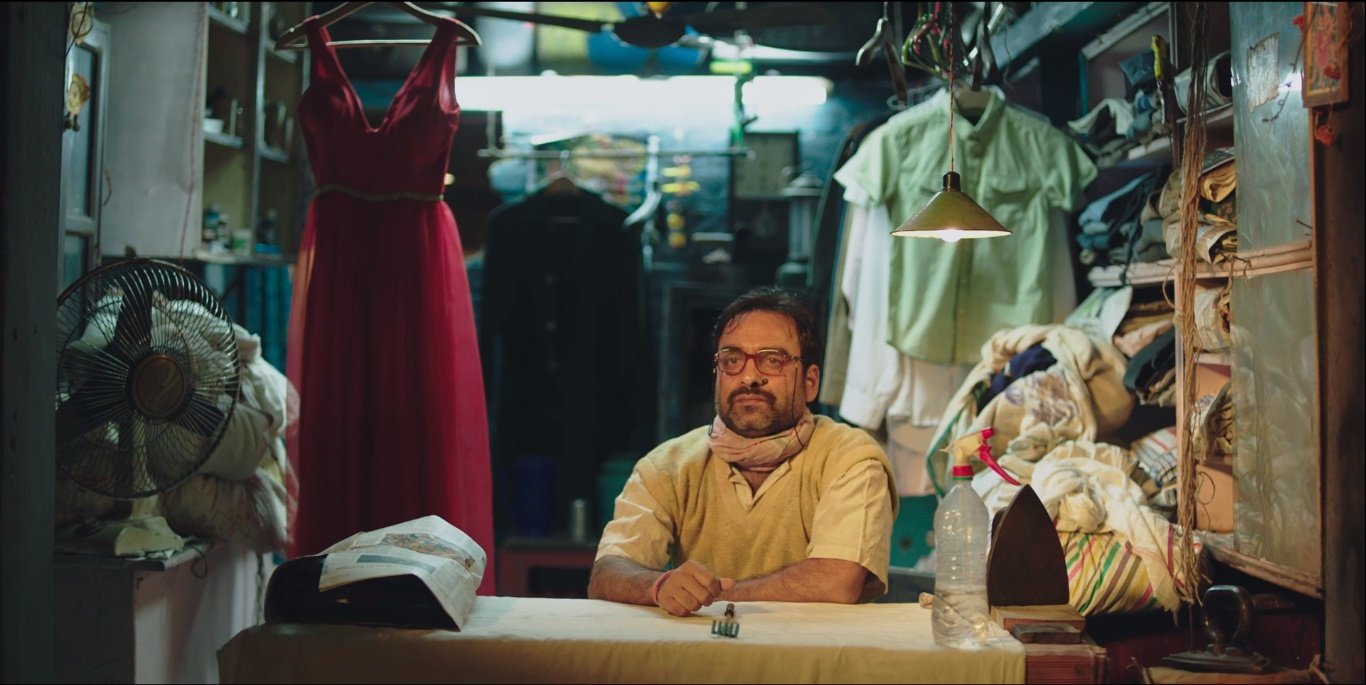 He is a romantic at heart. If you can’t spot it on his face, Basu also cleverly puts in pieces of romantic dices for the ones who hear their films along with seeing them. The late-night radio is also punctuated by the voice of a certain ‘Laali.’ This one is however different from the one he left behind when he left his homeland to earn a living.

Basu weaves in strands of social structure and its effect on people. He also tosses the cliche Bollywood trope that the poor man gets the rich girl – which in reality is seen through the poor man’s time with a rich woman’s dress. ‘Laali‘ is entirely a melancholic tale about a man’s yearning for love as he has wasted most of his formidable years making a living for himself. He has his music, his alcohol, and his affirmative doll to keep him sane, but both time and love – the two main ingredients for a true life are slowly slipping away from him.

However, it is the mastery in Pankaj Tripathi’s performance that subdues this character with warmth and wit. He doesn’t let the character turn into a caricaturish slobby middle-aged man. This is also a huge leap for director Abhiroop Basu whose first short film ‘Meal‘ was a film about domestic violence with a strong undercurrent of contemporary political subtext. The first 10 minutes of ‘Laali‘ will remind you of his last effort. It only goes to say that he has matured as a filmmaker as it takes a lot of courage to move out of one’s comfort zone and take up something entirely different. The sound design here is as good as ‘Meal’ if not better. The cinematography is carefully composed and not a second feels wasted as it slowly glides along to give you a sense of place.

Overall, ‘Laali‘ is about longing for that one perfect someone that we always fantasize about. It is as much about loneliness as it is about having to live with oneself in the lure of seeing a bright-colored day someday.

Bori [2020] - A Heartwarming Film about the Struggles of Being Different