It wasn’t just Thiagarajan Kumararaja in Tamil film industry who made a riveting directorial debut in 2011 (‘Aaranya Kaandam’) and took eight years to deliver his highly anticipated, sophomore effort (‘Super Deluxe’). Santhakumar also directed his first feature-film in 2011, titled ‘Mouna Guru’, which was a brilliantly written multi-layered and character-driven thriller (spawned a mediocre remake in Hindi – ‘Akira’). With Arya in the lead, Santhakumar’s Magamuni (2019) also promised us a smartly-packaged thriller. At its core, Magamuni takes up the classic, if not the timeworn, premise of displaced identical twins. But writer/director Santhakumar’s unique handling of the material and intriguing character sketches perfectly holds our attention throughout.

Maga drives a taxi. He lives with his wife (Indhuja) and a little boy, and burdened by financial problems any typical member of the unorganized, urban labor force might face. When he hears that a teacher has hit his boy for no valid reason, Maga’s wife demands a vigorous response from him. But he calmly waits in front of the principal’s office with his boy, a soothing portrait of Jesus holding a child in the background, and then persuasively talks to the principal on why he should shun this kind of behavior from teachers. If Maga’s life and the atmosphere feel a bit constrained, Muni, as his name implies, lives like a sage. He does organic farming in a remote village, reads a lot, and bestows education to kids who aren’t privileged enough to receive it. If Maga is pragmatic enough in the life he leads, Muni is all about forging a new path in life, while evoking deeper questions about spirituality, caste, karma, mankind, etc. 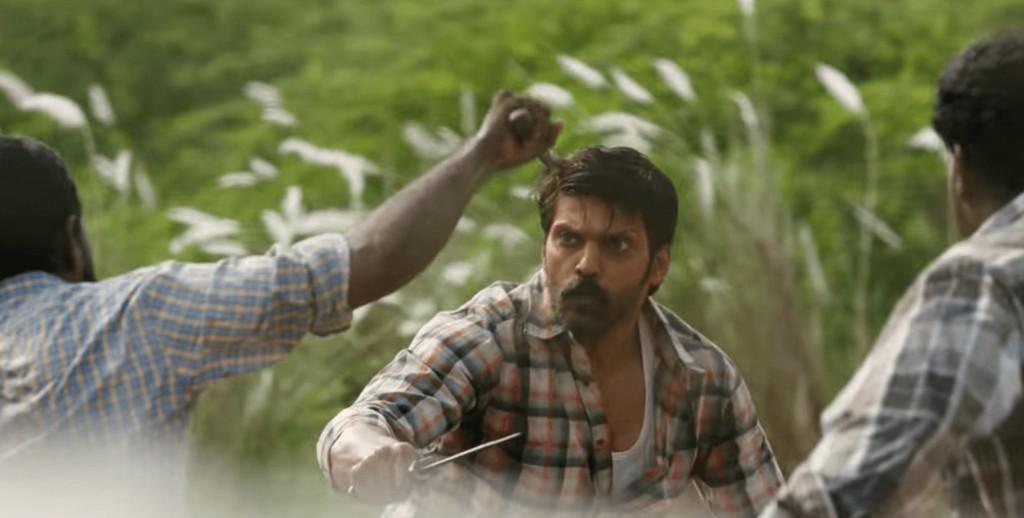 In Mouna Guru, Santhakumar took a very simple story and by adding layers upon layers of details, he transformed it into an intricate puzzle. Magamuni doesn’t reach the intensity of Mouna Guru’s narrative build-ups, but Santhakumar keeps adding fresh details that keep taking forward the plot and brings interesting shades to the characters. Although Maga talks to his son about the futility of violence and how it has nothing to do with courage, in an earlier scene we see a knife poking out of his shoulder blade. It’s soon revealed that Maga is an expert hit-man, exclusively working for the politician Muthuraj (Ilavarasu). While Muthuraj has become too big to be assassinated, his enemies are looking to settle scores with Maha. The soft-hearted father yet the savvy paid-killer is forced to do one last job for the politician before retirement.

On the other hand, Muni despite his philosophical outlooks and studious, good-hearted nature remains too naive to believe some people and underestimates the corruptible power of caste hegemony. His ‘enemy’ is of different nature, a scenario that kind of echoes the central conflict in ‘Pariyerum Perumal’ (2018); a wealthy, casteist father’s absurd overreaction. One would assume that the twins would eventually come together and dispatch their respective enemies. The bad men do get killed (the staging of deaths are so satisfying), but the other typical narrative elements (reunion or backstories) are handled with admirable nuance and are entirely free of tiresome visual choices.

Magamuni maintains the intensity of an action flick although there isn’t much action scenes. Each sequence is meticulously staged, gradually building-up on Maga and Muni’s emotional journeys. Like the aforementioned scene where Maga meets his son’s school principal, Santhakumar strews the narrative with fascinating exchanges and staging techniques. Muni’s idealism roiling beneath his quiet demeanor is brought out in a considerably subtle manner so that his reflections never come across as ‘message’. There’s quite a lyricism in the way the film-maker expresses the betrayals and cruelties imposed upon the characters (the shot of camera looking up from a darkened well, followed later by the shot of burning well speaks of the deep sadness and rage in the different situations). Moreover, it’s good to see a backstory set up just with a flurry of images. And I particularly liked the film’s final images, the spiritual coming-together of Maga and Muni (even though I would have liked it more without a voice-over saying what happened to all the characters; but even with such perfect descriptive voice-over, some people in the theater were scratching their heads over ‘which twin brother survived’). Arya offers solid performance in both the roles, proving that he is very good at underplaying (probably his career-best).

Thadam was an entertaining whodunit Tamil thriller also involving identical twins. Magamuni isn’t as deliciously twisty as Thadam. But Santhakumar makes the film more hard-hitting due to his deeply-rooted characterization. The very stereotypical portrayal of the politician characters and the actors playing these roles are some of the notable flaws in the narrative (apart from few pacing problems). Nevertheless, Magamuni (157 minutes) for the most part is a well-structured revenge thriller which executes the dictates of the genre with aplomb and freshness.

The Representation of Women in Film Noir